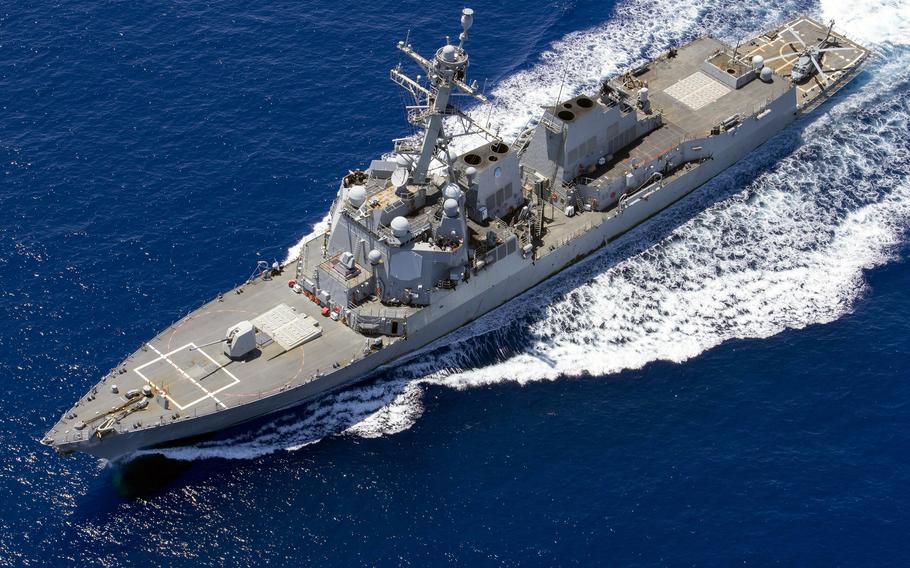 The U.S. Navy has canceled plans for a port call by one of its warships on Japan’s northernmost island amid a nationwide spike in coronavirus cases.

The guided-missile destroyer USS Stockdale and its crew of 240 were scheduled to visit Otaru, Hokkaido, Feb. 6-11, according to the city’s website.

The Stockdale deployed in August from San Diego with the Carl Vinson Carrier Strike Group and stopped in Guam on Dec. 23, according to a U.S. Pacific Fleet statement that day.

However, officials from the Navy and Otaru said Thursday that next month’s port call had been canceled.

The U.S. 7th Fleet confirmed the cancellation but declined to provide Stars and Stripes with more information.

"As a matter of policy and to safeguard operational security, we do not comment on the specifics of ship schedules," 7th Fleet spokesman Lt. Mark Langford said in an email Thursday.

The Japan Coast Guard told Otaru officials about the cancellation Tuesday but did not provide a reason why the warship wouldn’t come, Tomoyuki Seki, an official with the city’s general affairs department, told Stars and Stripes by phone Thursday.

Otaru, along with Sapporo city and the Hokkaido Government Office, had planned to ask the Navy to reconsider the visit due to the pandemic surge and the difficulty of conducting friendship activities under those conditions, Seki said.

However, the Navy canceled the visit before they made the request, he said.

“We are relieved of the result when we think of the current infection situation,” Otaru Mayor Toshiya Hazama said Wednesday, according to Seki.

The move coincides with surging coronavirus cases in Japan. On Wednesday the Ministry of Health, Labour and Welfare reported 13,052 cases, the most in four months.

The U.S. military population in Japan, which includes more than 50,000 service members, was ordered Monday to stay on their bases or in their off-base homes until Jan. 24 to help curb the spread of COVID-19, the coronavirus respiratory disease.

The order arose after the Japanese government drew U.S. authorities’ attention to the spread of cases in communities surrounding U.S. bases on Okinawa and near Hiroshima starting in mid-December.

U.S. ships have made regular port calls at Otaru, but the Stockdale’s visit was to have been the first in two years, Seki said.

The Navy’s last stop there was made in 2019 by the USS Blue Ridge, the 7th Fleet’s flagship, according to the city’s website.