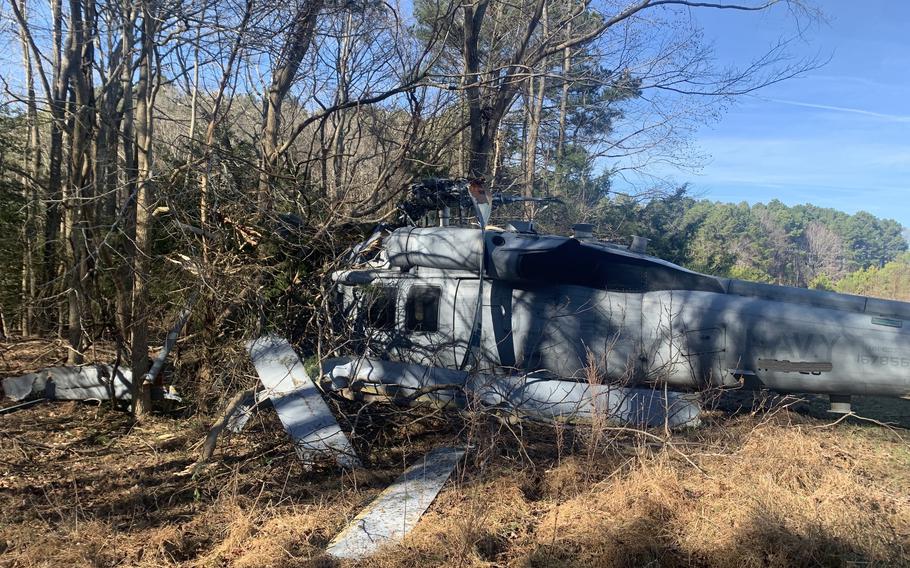 VIRGINIA BEACH, Va. (Tribune News Service) — A Navy helicopter with three people on board crashed after the pilot attempted an emergency landing Wednesday morning in Isle of Wight County, according to law enforcement officials.

Virginia State Police were called to the scene, an open field on private property in the 12300 block of The Oaks Lane, at 11:31 a.m., said Sgt. Michelle Anaya.

“As the helicopter pilot was making the emergency landing, the momentum of the craft caused it to slide into the wood line,” Anaya said. “The craft struck several trees, sustaining damage to the front cockpit area and both sides of the landing skids.”

Three Navy personnel were on board — two pilots and a passenger. The pilots were uninjured and the passenger was transported to the hospital with minor injuries, Anaya said.

State troopers and the Isle of Wight Sheriff’s Office responded to the scene.

The U.S. Navy Investigation and Security personnel have taken over the investigation. The Navy will investigate the cause of the accident, said Lt. Cmdr. Rob Myer, spokesman for Naval Air Force Atlantic.

The Federal Aviation Administration is not investigating the crash, Anaya said.