Navy’s costly carrier finally has all its bomb-lifting elevators 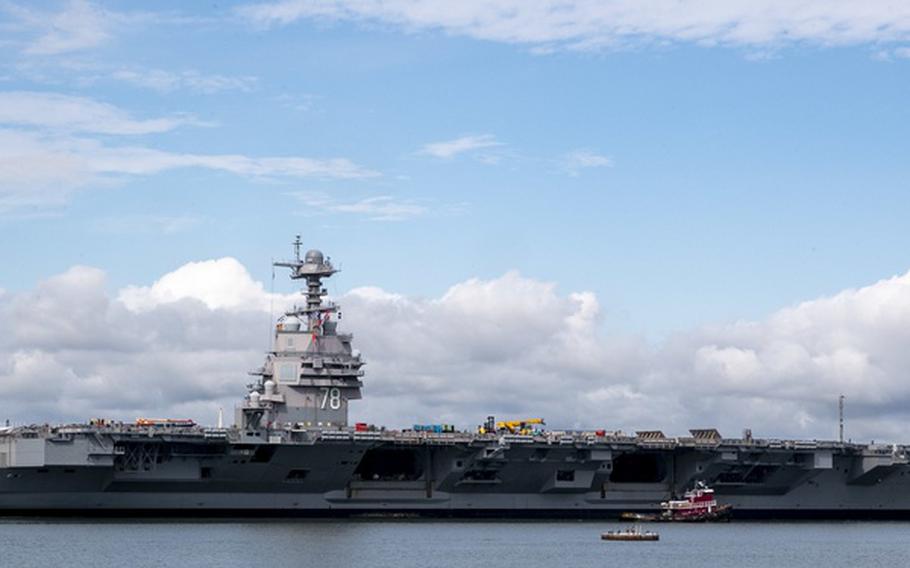 The Navy took delivery of the first in the Ford class of carriers in May 2017, praising the “newest, most capable, most advanced warship” and saying it was “expected to be operational in 2020.”  (Ryan Seelbach/Navy)

The Navy’s costliest warship finally has all the elevators needed to lift bombs from below its deck so it can deploy on its first operational patrol — more than four and a half years after delivery.

The service has announced that the 11th and final Advanced Weapons Elevator is in place on the $13.3 billion USS Gerald R. Ford and the aircraft carrier is ready for training and operations.

“This is a significant milestone for the Navy, ship and her crew,” Rear Adm. James Downey, the Navy’s program executive officer for aircraft carriers, said in a statement. “We now have the entire system to operate and train with.” He said the service and the prime contractor, Huntington Ingalls Industries Inc., used “hundreds of craftsmen, technicians and engineers, working around the clock --through multiple underway and holiday periods -- to get these advanced systems on line and operational.”

The Navy took delivery of the first in the Ford class of carriers in May 2017, praising the “newest, most capable, most advanced warship” and saying it was “expected to be operational in 2020.” The service didn’t disclose that none of the 11 elevators were operational, much less installed, until Bloomberg News reported the problem in November 2018.

“I recognize the extraordinary effort that it has taken to finish all 11 of these elevators, but this effort should not have been necessary,” Sen. James Inhofe of Oklahoma, the top Republican on the Senate Armed Services Committee and the most vocal congressional critic of the Navy on the issue, said in a statement.

The delay to fix the elevators and resolve other issues “has lengthened a period during which the Navy is attempting to maintain policy maker-desired levels of carrier forward deployments with its 10 other carriers,” the nonpartisan Congressional Research Service said in a report this month.

Inhofe put it more bluntly. He said the delay has forced other ships and crews to deploy “longer and more often,” as well as causing gaps in in the Navy’s global “presence when no carrier could deploy, at a time when naval presence and capability could not be more critical for our national security.”