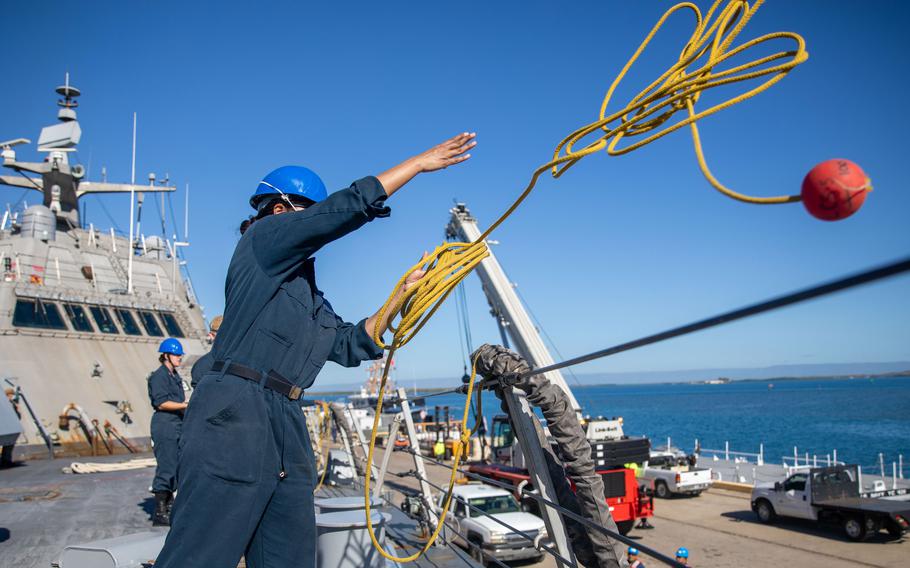 Sailors work aboard the USS Milwaukee as it arrives at Naval Station Guantánamo Bay on Dec. 20, 2021. (Danielle Baker/U.S. Navy)

U.S. Navy commanders whose ship is hobbled by a coronavirus outbreak are consulting with military medical personnel about providing vaccine boosters to the crew, officials said, as senior Defense Department leaders assess how the USS Milwaukee can resume its deployment amid a global spike in infections fueled by the highly transmissible omicron variant.

The Milwaukee, a littoral combat ship with a crew of 105 plus a detachment of Coast Guard personnel and an aviation unit, remained idle Monday at the U.S. military base in Guantánamo Bay, Cuba, where it stopped to refuel Dec. 20. It had been at sea less than a week. The Navy declined to say how many of the ship’s personnel have tested positive for the virus, saying only that some exhibited mild symptoms and that measures were taken to isolate those infected.

While the Navy told all its sailors last week it strongly recommends the booster and expects them to be a requirement soon, the regimen is not mandatory for the crew of the Milwaukee. Booster shots would be offered on a voluntary basis, said Cmdr. Kate Meadows, a spokeswoman for U.S. Naval Forces Southern Command. Commanders also have implemented a strict indoor-outdoor mask mandate, hoping to prevent further spread.

The challenge facing Navy leaders is complicated by a relentless political debate surrounding President Joe Biden’s vaccination strategy for military personnel and other federal workers. Defense Department officials have ordered all U.S. troops to receive a baseline regimen but thus far have wavered on the question of requiring boosters, even as the administration’s top public health experts have warned that an extra dose is necessary to counter the threat posed by the omicron variant.

“The ship has not received any boosters (to date) while in port, but they are coordinating with the [military hospital at Guantánamo Bay] on when boosters could be administered to those personnel who are interested in receiving one,” Meadows said in an email Sunday night.

Dawn Grimes, a spokeswoman for the hospital, said Monday morning that boosters would be transferred to the Milwaukee “pending confirmation of number of doses needed.” Once on the ship, the shots will have a 31-day shelf life, she said, noting that no one from the hospital has yet boarded the vessel.

Military officials have not determined whether the omicron variant — which has demonstrated an ability to evade coronavirus vaccines, leading to a surge in breakthrough cases — is responsible for the Milwaukee’s outbreak. In announcing that the ship would remain at Guantánamo, Meadows said Friday that the crew was “100 percent immunized,” and she touted the coronavirus vaccines’ effectiveness for warding off serious illness. No one on the ship has required hospitalization, Meadows said, confirming a report Sunday by the New York Times.

Although the overwhelming majority of U.S. military personnel have complied with Biden’s vaccination requirement, tens of thousands have resisted those orders, prompting some expulsions, while others await determinations on requests for religious or medical exemptions. Now the Pentagon is evaluating whether to begin mandating booster shots, too. As the omicron variant has become more dominant, public health experts have advised people — with increasing urgency — to seek an additional shot, saying another dose can recharge waning immunity and help ward off severe disease and hospitalization.

The Milwaukee left its home station in Mayport, Fla., on Dec. 14 for the start of a months-long counternarcotics mission in the Caribbean and Eastern Pacific. It is unclear how the virus outbreak may affect those plans and what Navy officials can do to prevent a similar incident once the ship gets back underway.

“Leadership is discussing various mitigation strategies and already collecting lessons learned,” Meadows said. “Our focus right now is ensuring the sailors are healthy and can safely return to sea.”

Officials have offered no timeline for when that may happen.

“Next step boosters for sure,” predicted retired Gen. John F. Kelly, a former top official in the Trump administration who served 40 years in the military. His final assignment as the head of U.S. Southern Command involved oversight of all American military activity in Latin America outside Mexico. Guantánamo Bay, he said, is “a good place to hold up and sort things out.” He noted that the base has a hospital and that it’s a short flight to larger medical facilities in the United States, should a need arise.

“The good news,” Kelly emphasized, “is all those aboard are generally very young, and all are likely in good heath. Can’t imagine any have weak immune systems, otherwise they would not have deployed. . . . I am sure the ship’s skipper is doing what he’s doing in an abundance of caution.”