by
Chad Garland
• Stars and Stripes • December 22, 2021
This story has been corrected. 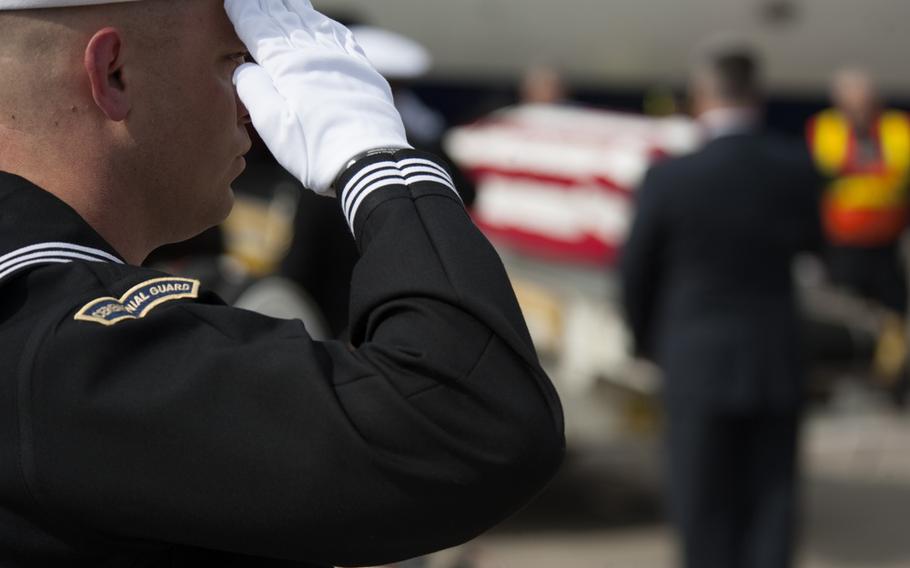 In this file photo, a member of the Navy’s ceremonial guard team salutes a casket at Washington Dulles International Airport. A Navy Reserve nurse became the 17th sailor to die of causes related to COVID-19. Lt. Ivey Quintana-Martinez died over the weekend in a Los Angeles hospital, where she had been since Nov. 10. (U.S. Navy)

A 35-year-old Navy Reserve nurse who died over the weekend of complications related to COVID-19 in a Los Angeles hospital is the 81st military fatality from the disease.

Quintana-Martinez was a naturalized U.S. citizen and served 10 years in the Air Force before joining the Navy Reserve Nurse Corps through a direct commissioning program in 2019, Lt. Cmdr. Amber Lewis, a Navy Reserve Forces spokeswoman, said Wednesday in an email.

In January, she was assigned to Navy Reserve, Navy Medicine Readiness and Training Command at Camp Pendleton, Lewis said.

Navy data released days before her death showed only one sailor hospitalized with COVID-related illness out of some 661 cases.

Quintana-Martinez’s death brings to 17 the number of fatalities among sailors from COVID-related causes.

Throughout the Navy, a total of 180 sailors, civilian employees, family members and contractors have died from the disease, according to data released last week.

Some 2,750 active-duty sailors had sought religious accommodations, but the Navy has so far granted none. The service had approved seven permanent medical exemptions and nearly 300 that were temporary.

More than 215 exemptions have been granted for administrative reasons, such as operational deployment, emergency leave or change of duty station.

Sailors who do not get vaccinated or do not receive an exemption face administrative penalties, such as loss of education benefits, promotions and bonuses. Those who reject the vaccine altogether will face separation from the service.

Last week, the Air Force said it had discharged 27 service members for refusing the vaccination, while the Marine Corps said it kicked out 103 of its members for the same reason.

In the Army, two battalion commanders were among the six active-duty leaders relieved of duty for failing to comply with the vaccine mandate.

Some 3,860 soldiers had refused the vaccine without a pending or approved exemption, and officials had issued over 2,700 written reprimands to soldiers who continued to defy the order, the service said last week.

This story has been updated. A previous version misspelled Lt. Ivy Quintana-Martinez’s first name, based on incorrect information provided by the Navy. It has also been updated to include new information about the date of her death.