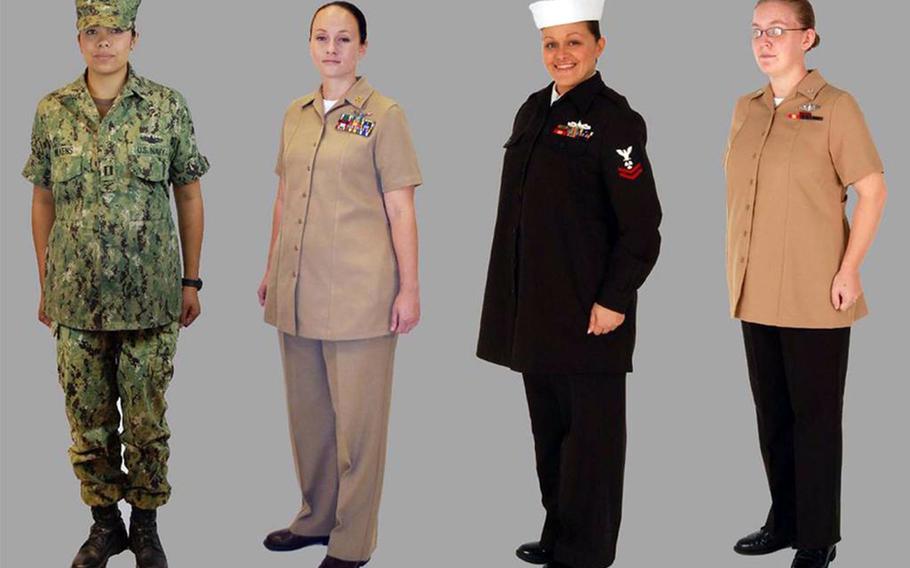 The Navy is conducting a pilot program between Jan. 2, 2022, and Sept. 30, 2026, that will provide a full array of authorized maternity uniforms to expectant sailors at no cost. (U.S. Navy)

The Navy is looking for hundreds of pregnant sailors to help find the right fit for maternity uniforms.

The sea service is conducting a pilot program between Jan. 2 and Sept. 30, 2026, that will provide “a full array of authorized Navy maternity uniforms” to expectant sailors at no cost to them, according to an administrative message, NAVADMIN 284/21, which lays out the details.

The Navy is opening the program to 400 volunteers from enlisted and officer ranks in active and reserve units worldwide. The maternity attire will include the working uniform Type III, service khaki for E-7 and above and the service uniform for E-6 and below.

Robert Carroll, the head of Navy Uniform Matters, said pregnant sailors will be accepted into the program on a first-come, first-served basis, according to a Navy news release from Dec. 15.

“Uniforms will be provided to participants fully hemmed and with all required sewn-on accoutrements attached,” it stated.

Uniforms will also be shipped at no cost. If the pilot program succeeds, the number of eligible sailors will be increased.

Eligible sailors must be approved for the program by their commands and meet five criteria, including being pregnant when they apply, having 12 months of service remaining at the time of their request and not planning to receive a maternity clothing allowance during their pregnancy.

Sailors accepted into the pilot program will be measured for uniforms by their local Navy Exchange uniform section, which in turn will contact them regarding their uniform issue.

Also, those sailors must return their maternity uniforms when their pregnancy is over. Feedback from individuals on the program process and wear testing will also be required.

The Navy announced the program about six months after unveiling a prototype for an adjustable maternity flight suit. A similar uniform was announced by the Marine Corps in April.