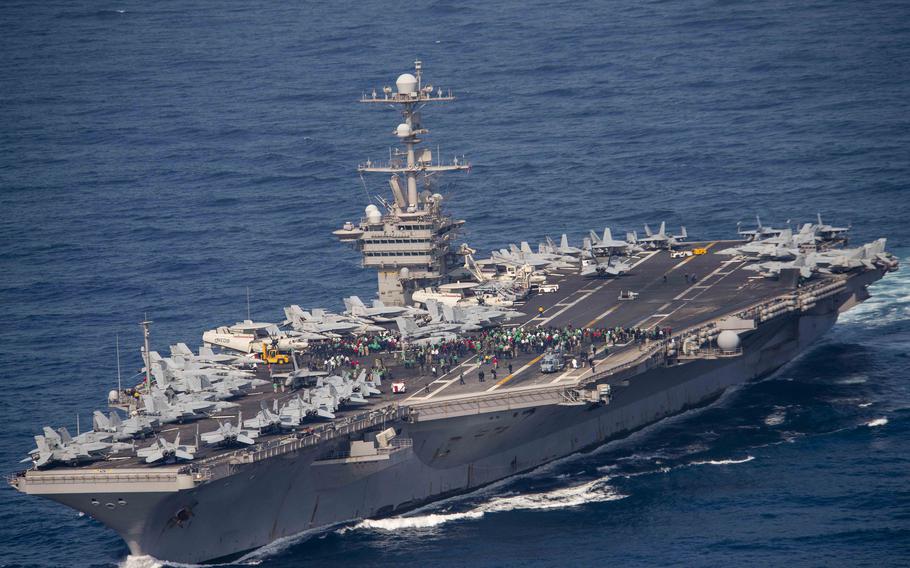 (Tribune News Service) — For a handful of Americans on a ship full of sailors who drive on the wrong side of the road back home, it was inevitable that there’d be a few bumps in the passageways of the Royal Navy’s new fleet flagship, the carrier HMS Queen Elizabeth.

But when it came to preparing and loading weapons for the U.S. Marine F-35B that operated off the Queen Elizabeth on its first deployment, there weren’t many bumps at all for a team of 18 aviation ordnancemen from USS John C. Stennis.

“Well, with some of the Scottish accents, there was a bit of ‘excuse me, what did you say?’ at first,” said Chief Petty Officer Jesse Robertson, senior enlisted sailor on the Stennis team.

Some of that involved technical terms, but it also meant learning that “scran” in British English meant chow, he said. And the food, while good, was different — “more European and Asian,” said Petty Officer Christopher Cannon.

Deploying with the Queen Elizabeth meant a particularly long time away from home for the Stennis sailors — nine months in all.

“There’s always a challenge going on deployment, but also a lot of excitement being able to go on a foreign aircraft carrier,” Robertson said.

They embarked well before the British carrier’s maiden effort, leading a carrier strike group in the May Exercise Strike Warrior, as part of NATO’s Exercise Joint Warrior 21-1 in the waters around Great Britain.

From there, the carrier conducted joint operations with NATO allies in the Atlantic and Mediterranean and ran combat operations against ISIS in Syria before heading to the Indian Ocean and the flashpoints of the South China Sea.

“It’s a learning experience for everyone ... we get a sense of their rhythm of operations” said Lt. Michael Brown, who was the officer in charge for the Stennis team on the Queen Elizabeth.

Because the Queen Elizabeth is smaller than the nuclear powered Stennis — the British crew is about 680 compared to the more than 3,500 on American Nimitz-class carriers — the way sailors work differs, Robertson noticed.

The British ordnance team typically included very experienced sailors — some with 10 years or more in the Royal Navy — but their experience didn’t always include the same kind of specialized, intensive technical experience even fairly new U.S. Navy ordnancemen get, Robertson said.

“They’re not jack of all trades,” he said.

And for the Stennis sailors, the deployment was a chance to become more familiar with ordnance for the F-35B. The F-35B does operate on U.S. Navy amphibious assault ships, like the USS Iwo Jima, which has just moved to Norfolk, but not commonly on Nimitz-class carriers. But F-35s will be part of future carrier air wings, particularly for Ford-class ships.

“Our most important asset on the USS John C. Stennis is our people,” said Capt. Cassidy Norman, the carrier’s commanding officer.

For the sailors on the weapons team, it meant a chance to support one of the country’s oldest allies and a chance to keep their skills sharp, he said.

“The real-world experience was invaluable for our weapons team,” he said.