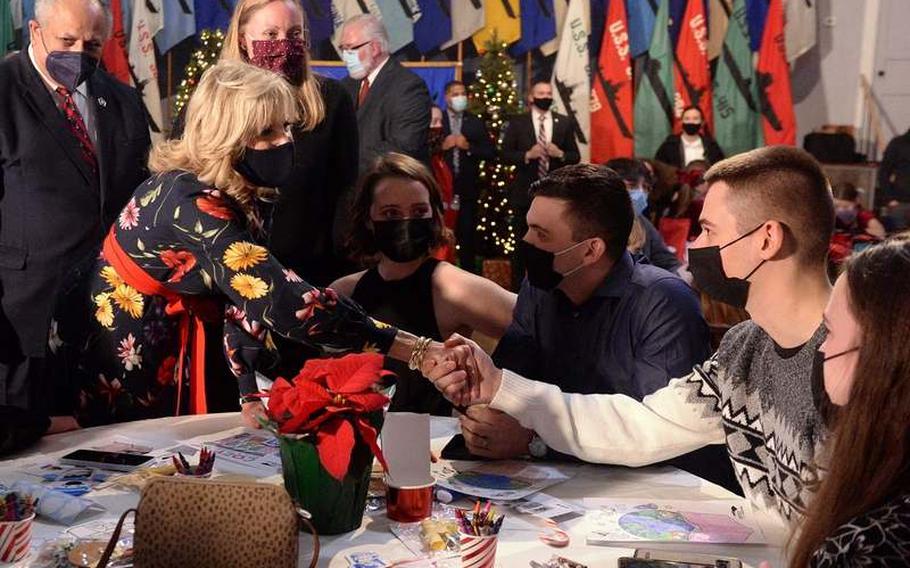 First lady Jill Biden shakes hands with two sailors, second and third from right, who are crew members of the USS Delaware, while visiting with families of the submarine crew Thursday, Dec. 9, 2021, at the U.S. Submarine Veterans Club in Groton. Secretary of the Navy Carlos Del Toro, left, looks on in the background. Biden is the sponsor of the submarine. (Dana Jensen, The Day/TNS)

Biden is the sponsor of the USS Delaware, a Virginia-class submarine built at Newport News, Va., and christened in 2018.

“I understand what it feels like for all the military families here who have someone who is deployed, especially at the holiday,” she said. Talking about Beau Biden, she added, “My son was Army National Guard; he did go to Iraq for a year. I saw that empty chair at the table, whether it was Thanksgiving or Christmas or birthdays, so I know how much it sort of tugs at your heartstrings, especially during these tough times.”

Jill Biden’s father served in the Navy, and she recalled seeing the Blue Angels flight demonstration squadron many times and being so proud to wear her dad’s sailor hat.

“Being a military kid can be hard at times, especially when it comes to my dad and being away from family in Arkansas and North Carolina,” she said. “But it also has its advantages: seeing new states almost every three years and learning new things, too.”

Fineran said she has lived in four states: California, Maine, Virginia and Connecticut. Since moving here, she has gotten a German shepherd and is learning to play the flute and speak French.

Family members sat at tables with poinsettias and holiday-themed picture frame crafts and cups of crayons with coloring pages. Santa wandered through the tables, handing out candy canes from his bag.

Among the family members were Elise Alvarado and her kids, 6-year-old Orion and 1-year-old Sarai. Her husband, Mark Alvarado, has served in the Navy for 13 years, and the family moved from Hawaii to Groton in May.

“We’re both from the area, so to come back has been really nice for us,” Alvarado said. Their parents are veterans, and Elise Alvarado’s parents retired here. But she said the USS Delaware is in and out all the time and it’s tough, so she tries to stay busy.

Acacia Lazos — who was there with her three kids, all under age 2 — said the USS Delaware got underway at the end of November. She hopes her husband, Brandon Lazos, is back in time for Christmas.

At the event Thursday, Biden made her way around the tables, stopping to talk to family members and take pictures — and hold a baby.

The host of the event was United Through Reading, a nonprofit that connects separated military families through the experience of storytime. With the help of the organization’s volunteers, service members record themselves reading books and then send the recordings — along with the books — to their children.

Josie Beets, the agency’s senior vice president of advancement, said United Through Reading often hosts events where it’s giving books to military families. At this event, she said volunteers networked with attendees “so we can continue to support these families beyond tonight.”

She said one of Jill Biden’s priorities is military child education.

Biden told the kids Thursday, “I teach English, I teach writing, so I know how important it is that you read, so you become good readers and good writers.”