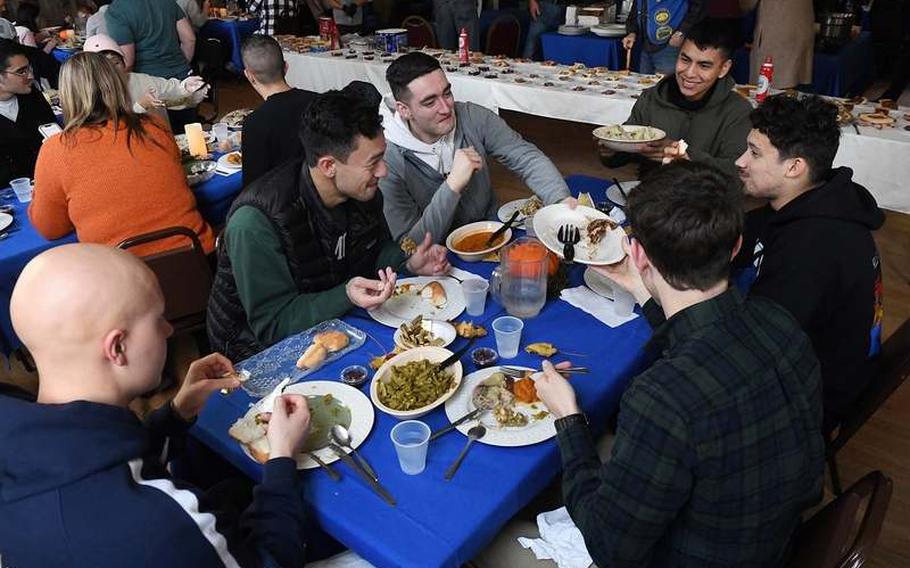 Seamen from the Naval Submarine Base New London eat their Thanksgiving dinner Thursday, Nov. 25, 2021, at the Submarine Veterans Club in Groton, Conn. (Dana Jenson, The Day/TNS)

GROTON, Conn. (Tribune News Service) — There’s no such thing as too many cooks in the kitchen on Thanksgiving Day at the Subvets clubhouse, where more than 100 volunteers deep fried, carved and dished out hundreds of turkeys Thursday to active-duty sailors, veterans and first responders for the 20th year in a row.

On the crisp, sunny November morning, steam spilled out of nine large metal pots that were stationed outside the clubhouse at 40 School St., each filled with turkey after turkey being fried to a golden crisp to feed the masses.

In the festively decorated clubhouse turned dining room, hundreds of active-duty and veteran members of the Navy, and their families and friends, enjoyed a Thanksgiving dinner with all the fixings — from stuffing to sweet potatoes — and a table filled with nearly every type of sweet treat and pie one could think of.

For two decades, volunteers at the clubhouse, the very first chapter of the United States Submarine Veterans Inc., have invited sailors and veterans who can’t be home with their families to join their Navy family for the holiday. Volunteers start carving turkeys on Thanksgiving Eve to fill the hundreds of plates and package up meals for those who can’t make it in for dinner. Fresh, hot dinners are driven on Thanksgiving morning to veterans who can’t leave their homes, active-duty sailors, local first responders and correction officers.

Drivers delivered more than 650 meals this year. Among them were John “Jack” Casey, 75, of Groton, and his niece, Karin Boucher.

Casey, who volunteered to go overseas to Vietnam in 1963 with the Navy, has been helping with the Thanksgiving dinner for nearly 20 years.

“In 2002 I was here sitting at the bar and someone said, ‘Do you know how to cut a turkey?’ And I made the mistake of saying yes. And now I’ve carved hundreds,” said Casey.

He doesn’t even like turkey, he said. But he returns every Thanksgiving to carve up the birds or hand deliver meals, going home “with everything I’m wearing smelling like turkey,” he said.

The tradition, Casey said, is an important one to keep up.

“This is open to anybody that was in the military or friends that don’t have a place to go,” he said. “For a lot of sailors this is their first time being away from home. All of us have been through that. We want their parents to know that their kids are being taken care of.”

In his eyes, he’s just returning the favor.

“When I got back from Vietnam I was told, ‘We take care of our own.’ That’s what’s been pounded into you when you’re in the Navy. We’re taught to share and take care of each other.”

Steve Ricard, who runs the annual dinner, said that they could never feed as many people each year without their team of volunteers and generous donations of turkeys and funds from local businesses and organizations.

“This is an important tradition because not all of the sailors have a chance to go home and have a home-cooked meal, so this gives them the opportunity to have a good meal for the holiday and it gives our members an opportunity to give back,” said Ricard, who was volunteering with his wife, son and daughter.

Ricard retired from the Navy in 2005 after being on active duty from 1971 to 1975 on two submarines and in the reserves for 30 more years. He has been involved with the Subvets clubhouse for decades.

“The problem we saw years ago was that there were so many single sailors or sailors who weren’t near their families. So we got together and figured the best thing we could do was get a meal in front of them and get them off the base,” said Crisman, who oversees the deep frying of all the turkeys.

Bringing members of the Navy to the clubhouse for dinner helps them learn about Naval history, which Crisman said is an important part of the job.

“The submarine force is based on history. It’s the same being a submariner now as it was 45 years ago when I started, and it’s important for the new submariners to see what this organization is all about so they understand our history and where they come from,” he said.

Enjoying full plates of Thanksgiving food were Eric Stewart and Jack Staggs, active-duty members from Alabama who couldn’t travel home to be with their families for the holiday.

The two sailors served in Hawaii together before both landed in Connecticut to work in support of submarines.

Stewart said if it weren’t for the local Subvets chapter, he’d be home alone watching football every Thanksgiving. But instead, he has a new tradition of joining his Navy friends and family at the clubhouse before he heads home to watch the big college game.

The pair agreed they want to help support the Subvets for future generations.

“It’s a great resource to have,” said Staggs. “Coming here with friends and keeping this place up and running is so important.”

Joseph Osorio, 20, and Lexis Lloyd, 19, are part of that new generation.

The couple have known each other since they rode the school bus together in Florida as kids and have been dating for years. This year, they both enlisted in the Navy, moved to Connecticut and are in submarine school. This was their first Thanksgiving away from home.

Osorio said he missed his mom’s sweet potatoes the most, while Lloyd was reminiscing about spending time with her younger siblings “bothering our mom while she cooked.”

Having the Subvets, they said, made it easier to be so far from home.

“The people you meet in the Navy really become your family, so although it feels strange not being home, it’s not uncomfortable, because we have this here,” said Osorio.