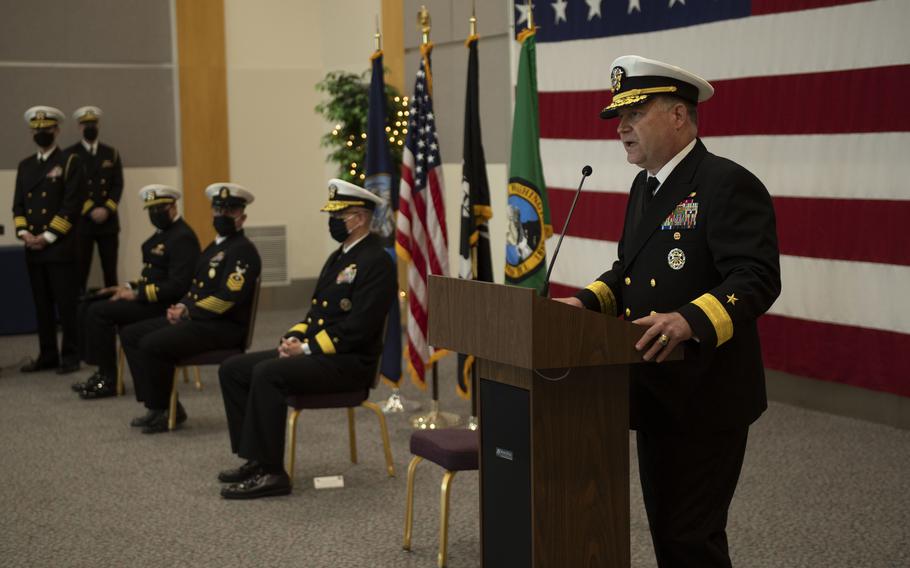 NAVAL STATION EVERETT, Wash. (Tribune News Service) — Rear Adm. Christopher Sweeney is a native of Maryland’s Eastern Shore who, as a boy, took to the Chesapeake Bay in a boat called the Striper Swiper to angle for rockfish.

Earlier this year, he arrived for his first tour of duty in the Puget Sound region to command Carrier Strike Group 11, a force of aircraft and ships spread across bases stretching from Washington’s Whidbey Island to San Diego.

The strike group’s fighter jets, electronic warfare Growlers, helicopters, destroyers, cruiser and carrier are mainstays of the U.S. Navy. They help to sustain the intensive pace of the Navy’s global operations, which last year included a pandemic deployment of the strike group — led by the flagship USS Nimitz — to the Pacific, the Middle East and off the coast of East Africa, that kept crew away from families for more than 11 months.

Next year, the strike group is expected to head back out to sea on a new mission. Sweeney says he does not know yet where the strike group will go, though he has some idea of a departure date, which is not publicly announced in advance.

“Who knows, maybe they call me tomorrow and say go faster ... that would be great,” Sweeney said.

Sweeney commands the strike group at a time of renewed great-power competition, which was accentuated earlier this year when China set out models shaped like U.S. aircraft carriers for target practice in the desert, according to a report by the U.S. Naval Institute.

The Defense Department spends billions annually to expand and modernize a fleet facing the challenges of a 21st century in which China now commands the world’s largest fleet of battle-force ships.

There also is an urgent need to maintain aging ships, such as the nuclear-powered Nimitz, and fully staff them with trained officers and enlisted personnel. The risks of falling short in these tasks were starkly demonstrated in 2017.

That year, the Navy had four serious accidents, including two collisions at sea resulting in the deaths of 17 sailors and hundreds of millions of dollars in damage to ships. An internal Navy review cited crew overwork and fatigue, as well as training deficiencies, as contributing factors.

Earlier this year, a report by the Government Accountability Office found the Navy still routinely assigns fewer crew members to ships than its workload studies have determined are needed to safely operate. That study also included surveys indicating most deployed sailors still do not receive adequate sleep.

Sweeney was involved with some of the investigations into the rash of accidents.

He served as a Navy liaison officer to two families of the 10 sailors who died on Aug. 21, 2017, when the USS John S. McCain collided with a tanker in a congested stretch of water east of the Strait of Malacca. The Navy inquiry put much of the blame on leaders’ oversight, and poor training that led to crew mistakes, while a National Transportation Safety Board investigation also cited a touch-screen navigation system that increased the potential for operator errors.

More recently, Sweeney led a Navy command investigation into the sinking of an amphibious assault vehicle on July 30, 2020, killing nine service members as they were returning to the USS Somerset from a training exercise off San Clemente Island in California. That investigation, along with separate inquiries by the Marine Corps, cited poor maintenance and inadequate training as two of the causes.

Sweeney said his heart is “saturated with grief” over the loss of life.

In preparing for strike group exercises, he said, while “you want to push hard,” during trainings, safety needs to be a priority, so sailors don’t get hurt.

In discussions with the strike group’s warfare commander, he checks if vessels are properly manned and whether the crew is prepared to head to sea so he can assess readiness and weigh the risk to his force and the mission.

The Navy has a massive presence in the Puget Sound region with a payroll including more than 25,000 military personnel and more than 20,000 civilians. In addition to Everett, there is Naval Base Kitsap, Naval Magazine Indian Island and Naval Air Station Whidbey Island, according to a 2020 Navy presentation.

Their presence is not without controversy. And it has only intensified in recent years amid a 33-aircraft expansion of the EA-18G Growler fleet based at Whidbey Island.

Operations at a field near Coupeville is nearly quadrupling, and critics have blasted the Navy for disregarding public health and wildlife impacts from the noise of Growler jets. In 2019, state Attorney General Bob Ferguson filed a lawsuit, alleging a Navy environmental review failed to fully measure the impacts of the expansion, and that it violated federal law.

Sweeney, whose strike group includes Growler squadrons, said he could not comment on the pending litigation. He is well aware of the aircraft noise since he’s had them “basically land on my head” while he was berthed in quarters below an aircraft carrier landing strip.

“We’re not going to fix the sound of the Growler. But are we actually listening? Are we actually trying to mitigate it? ... I know we are,” Sweeney said.

Sweeney took over command of the strike group on April 30 less than two months after the Nimitz returned from the overseas deployment that began in the spring of 2020, at the onset of the COVID-19 pandemic, and required periods of isolation without traditional shore leave, masking and social distancing.

He was offered base housing, but chose to live with his wife and two sons in Kirkland. His uniformed presence, including visits to grocery stores, he says, has caught some by surprise.

“They say ‘Thanks for your service, but why are you here?’” Sweeney said.

While he commutes to the Everett base, his flagship vessel, the Nimitz, is undergoing months of maintenance work in Bremerton.

The nuclear-powered Nimitz, commissioned in 1975 and named after World War II Pacific fleet commander Adm. Chester Nimitz, is the oldest in its class of aircraft carriers. It carries squadrons of fighter jets that in a single day of 95 sorties can unleash some 750,000 pounds of bombs on targets, according to a 2018 Congressional Budget of Office report.

The Nimitz is expected to retire later this decade as a new generation of Ford-class aircraft carriers are built. The first of these Ford-class vessels have joined the Navy fleet after they were commissioned in 2017.

But the billions of dollars invested in the new ships comes amid an ongoing debate about the future of carriers and their potential vulnerability to anti-ship missiles that could sink them.

The 2018 congressional budget analysis questioned the cost effectiveness of any large investments into building such carriers, if they could not effectively defend against advancing technology.

But the analysis also noted a stop to building Ford-class carriers could hamper the Navy’s fighting ability, as aircraft carriers have been a centerpiece of operations dating back to World War II.

But that 20th-century conflict also demonstrated the vulnerability of Navy ships.

The Dec. 7, 1941, Japanese attack on Pearl Harbor caught the Navy unprepared and struck a severe blow to the Pacific fleet in an action that spurred the U.S. entry into the war.

On Tuesday, as the 80th anniversary of Pearl Harbor approaches, Sweeney journeyed across Puget Sound bearing a stark reminder of that day.

Prior to an all-hands meeting with sailors, Sweeney presented Nimitz commanding officer Capt. Craig Sicola with a framed metal piece of the sunken USS Arizona, which as it went down took the lives of 1,177 crew aboard the Pearl Harbor-based ship.

The relic will now reside with the Nimitz as a remembrance of that dark day. With it is a plaque, inscribed with words from Adm. Nimitz, who was called to take over the Pacific fleet in the aftermath of the attack: “To them we have a solemn obligation.”