(Tribune News Service) — After six years, the cruiser USS Gettysburg is out of the BAE shipyard after an overhaul that should keep the 30-year-old ship in action into the late 2030s.

The Navy has been trying for years to figure out how it wants to carry out its aging cruisers’ key missions: defending carrier strike groups against air and missile attacks and carrying missiles with their 122 vertical launching cells anywhere in the world.

Beginning in 2015, it began a modernization program of several cruisers, beginning with the Gettysburg in Norfolk and USS Cowpens in San Diego. The final phases of work on the Gettysburg were done under a $147 million contract.

That came after a phase that focused on structural repairs to the aluminum deck house, tanks and hull. 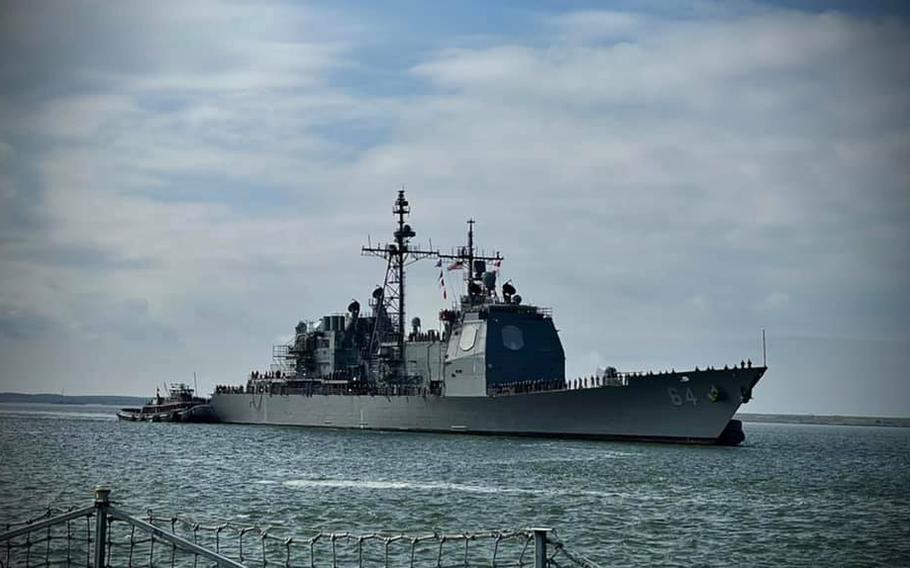 There was “a lot more structural work than initially anticipated as we got into tanks in some cases that had not been opened for quite some time,” Galinis told the U.S. Naval Institute earlier this year.

Fuel oil tank leaks discovered while the cruiser USS Vella Gulf headed across the Atlantic in February, at the start of its most recent deployment, forced the ship to return to Norfolk for what would be two months of repair and testing work.

The structural work still to be done complicated the modernization phase, Galinis said.

The Gettysburg will undergo sea trials to make sure all its propulsion, steering and electrical systems are working properly. Once that’s complete, the Gettysburg and its crew will launch into qualification trials for its combat systems.

But a bi-partisan group of members of Congress, including Rep. Elaine Luria, D-Norfolk, who served on a cruiser during her Navy career pushed back, amending the Biden Administration’s Navy budget to save three cruisers from decommissioning.