(Tribune News Service) — The move to Hampton Roads didn’t go that easily for the Bernabe family, and it got worse when their twin son and daughter started kindergarten, virtually, in September 2020.

“Within 20 minutes of his first virtual session, there was a loud noise. That was because of another student’s speaker system not being quite calibrated right, and it was very high pitch, and he covered his ears and he hit the floor,” Tosha Bernabe recalled.

“He just completely melted down, he freaked out screaming, yelling kicking. It was the first time that he ever got violent with me he began hitting me trying to rip my hair out.”

Though it continued every day of virtual school sessions — one tantrum lasted three hours — it wasn’t until October, when her son started twice-a-week sessions with just six children in class, that others got a close look at what the Bernabes saw every day.

Even when school staff see children with special needs, it can be a struggle to secure the services they need, especially for Navy families that move frequently and often find themselves, as the Bernabes did, in postings far from family and support networks.

Even for families with some experience with special education, getting services can be a struggle.

Mary and Ryan Forry’s daughter, Annabelle, had had special education help with speech, behavior and reading issues from preschool through most of first grade.

“But in March (2020) when school went virtual, they called and said they didn’t see those issues anymore,” Mary Forry said.

The Forrys did, though. Annabelle continued to struggle with reading. When a task didn’t go the way she wanted, frustration could spin into a tantrum.

Through second grade — virtual, thanks to the pandemic — they started to get a clearer sense of what would help. A neighbor, an experienced teacher, offered to help.

She set up a “classroom” in her home, a couple of doors down from the Forrys’, and the one-on-one time between the teacher and little girl revealed helpful strategies.

“She gave us a whole list; a calm down period, redirecting when she was getting frustrated and stuck, special reading help,” Forry said.

But the Forrys couldn’t get anywhere when they tried telling the school.

“It’d get argumentative,” Forry said. “It was kind of like they’re teaming up on us, they’re not hearing what we’re saying.”

The Bernabes sensed their son had special needs, especially after Kevin was first deployed soon after their arrival. But the family doctor said the tantrums and public meltdowns were just the child’s way of testing boundaries — and that he would grow out of it.

“He had extreme anxiety leaving the house, going, just even going grocery shopping was almost impossible ... I’ve had to abandon full shopping carts because he would go full meltdown in the middle of a grocery store,” Tosha Bernabe recalled.

“You’re one person and you’ve got two kids that are exactly the same age, and they’re both in a shopping cart and you’ve got to try to juggle one that is literally like a, you know octopus wailing all over the place and then still try to keep the other one safe while traveling through a parking lot.”

Only when her son started in-person kindergarten classes in October 2020 that people outside the family started to see the problem — but help still seemed out of reach.

The class met just twice a week, with just six children at a time, but her son couldn’t make it through a whole day, spending most of the time out of the classroom with the guidance counselor, school nurse or principal.

“She would be calling me every day almost, or every day that he was in school ... sometimes I could hear him in the background screaming hysterically,” Bernabe said. “And I literally have walked into his school when they called me to come get him a few times where he was being held down by the security person and the school nurse, because he had been attacking the principal.”

At that point, she tookher son to a specialist, received an official diagnosis of autism and ADHD.

“But what a lot of people don’t understand or know because I didn’t is that medical and school are separate. So even though my child had been diagnosed by a medical professional, as having autism, ADHD and anxiety, that is not enough of the school to just say OK, here’s your special education services,” Bernabe said.

“I’m just on a zoom conference with ... like nine other people ... you’re in front of all of these highly intelligent and trained people that are educated in these fields and know 100% what they’re doing and you’re sitting there having to say ‘Oh but wait’.”

“I really felt out of my depth. I was overwhelmed .... the technical terms they were using. I was a little confused and was having to ask a lot of questions and just really did not feel adequate to be to be fighting for my child. That’s a terrible feeling.”

Around spring break this year, the Forrys learned about the still-new special education pilot at the Navy Exceptional Family Member Program program.

“In our first zoom with Erica, she said, you’ve been at this so long, we’re going to need to bring in Alex (the lawyer),” Mary Forry said.

In two more zoom calls, they mapped out a strategy — including one approach the Forrys hadn’t thought of.

Instead of the Individualized Educational Program at the heart of most special education discussions, and which demand formal diagnoses, detailed assessment schedules and plenty of bureaucracy, Little suggested the less well-known “504″ plan.

Unlike the IEP, a 504 isn’t focused on detailing specialized educational and related services, It’s more about setting out ways to accommodate the special needs of a child.

For the Forrys’ daughter, that meant making sure her seat was close to the teacher, which helped with a tendency to be distracted and let attention slip.

It meant letting the teacher know to watch for those times when frustration was on the verge of spinning out of control, and stepping in to redirect the little girl’s attention — a favorite way is to suggest she take a break to draw something before returning to the work at hand.

Sometimes, a calm-down period was beneficial. Sometimes, a visit with the guidance counselor. A reading specialist is helping as she works to catch up with her classmates.

“When we met with the school, with Alex there, the tone changed,” Forry said.

“She just very quietly kept us all on track.”

For the Bernabes, their son’s diagnosis opened access to a range of services from the Exceptional Family Member Program, as well as insurance coverage for the Applied Behavior Analysis therapy than many parents of children with autism have found to be transformational.

Bernabe wondered if EFMP could help with school — and at just about the time the special education pilot got going.

She was hoping for a self-contained, special education classroom for her son — it means a smaller group than the 18 in a normal first grade class, and a teacher and aide experienced in working with children with autism.

“That’s where Erica stepped in,” Bernabe said. “She actually had [the kindergarten teacher’s] daily log that would document his behaviors. ...we had weeks and weeks and weeks and weeks of daily issues, everything from him trying to literally escape the school yard where you know he could have run into a road or something like that.”

In that classroom now, her son is flourishing, she said.

“I finally felt like, oh my gosh I have someone on my team,” Bernabe said. “It was definitely a game changer and brought me from feeling kind of hopeless and out of my out of my depth into feeling like okay, not only do I have someone backing me, but I have a source of information.” 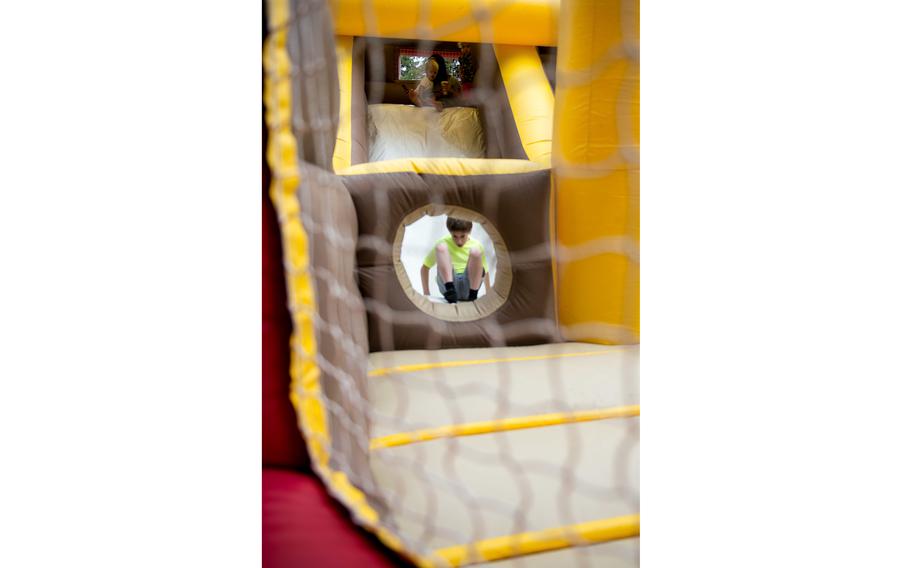