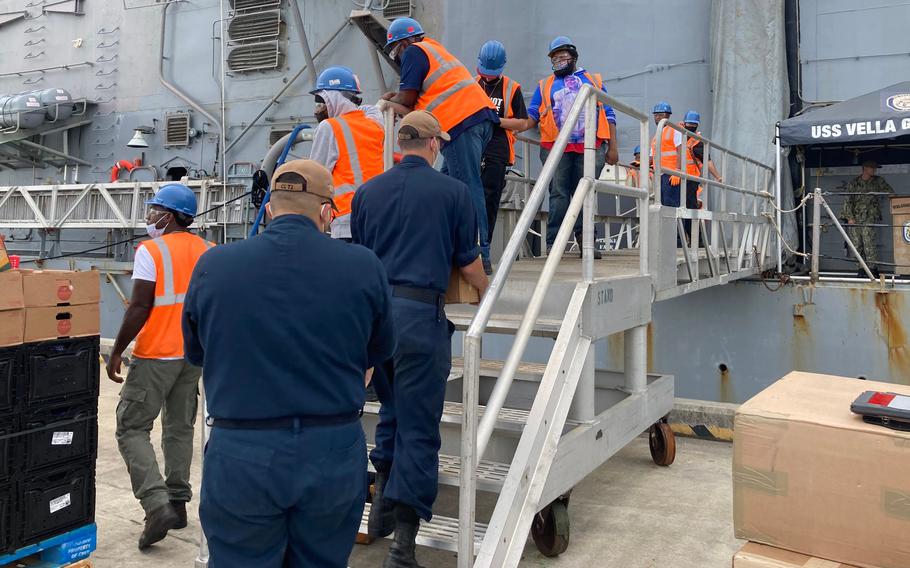 USS Vella Gulf sailors carry on a load of produce as the cruiser prepares to head out to sea again. (Dave Ress/Daily Press)

NEWPORT NEWS, Va. (Tribune News Service) - As USS Vella Gulf’s sailors lined up in a bucket bridge to load supplies, Capt. Michael Desmond recalled July 2020, when he hopped off a helicopter onto the cruiser’s flight deck to assume command.

The Vella Gulf, then on the first of what would be back-to-back deployments, was two days from the Suez Canal, and Desmond knew he’d have to count on 349 sailors with whom he hadn’t directly worked.

“But I was the operations officer for the Eisenhower carrier strike group (the Vella Gulf was part of), so I knew what they could do,” he recalled.

And, says Petty Officer 2nd class Nicholas L. Crocker, “we talked about it and we said ‘we’re going to make this as easy as possible for this guy.’”

Crocker is part of a small, tight team — the fire controlmen in charge of Vella Gulf’s Tomahawk missiles, the cruiser’s powerful offensive weapons. It’s a different kind of work from what other fire controlmen do with the cruiser’s missiles and guns designed to protect a carrier strike group from attack.

His team drills daily, for hours at a time, for that mission.

And they have plenty of other drills — he was set for a fire-fighting and an anti-terrorist drill with shipmates from other departments on the day before Vella Gulf’s scheduled departure this weekend for weeks at sea, exercising with the USS Harry S. Truman Carrier Strike Group.

“We all have about three or four jobs, at least,” Crocker said.

When Petty Officer 2nd Class Ryan Scott joined Vella Gulf’s administrative team, shortly after the first of those double deployments, he told his chief that he’d worked as a helmsman, a job usually done by boatswain’s mates, on his last ship and was hoping he could do the same on Vella Gulf.

“That’s the sort of thing a captain loves to hear,” Desmond said.

Scott was at the helm when Vella Gulf was in shallow waters and tight sea-room at the far end of the Arabian Gulf, in an exercise with Navy patrol boats, Coast Guard cutters and Kuwaiti warships — a far cry from the carrier and destroyers a cruiser usually works with.

“It was very congested, small fishing boats all over the place, lots of fog and dust from all the oil terminals in the air,” Desmond said.

“We’d run across Iranian ships all the time, but it was all very polite, very professional, according to the rules of the sea,” he said.

“Scott is an admin superstar and he’s a superstar master helmsman.”

Another young sailor, Petty Officer 3rd class Bellamy J. Oughton, spotted the tiny metal chunks in strainer on one of Vella Gulf’s lube-oil pipes that prevented a major disaster — the pipe fed the cruiser’s main reduction gear, the huge complex set of machinery that connects the ship’s engines with its two propeller shafts.

If the debris had flowed into the gears, it could have stopped the ship dead in the water, Desmond said.

Now pushing 30 years in service, Vella Gulf is old for a warship. After its 206-day deployment with the USS Dwight D. Eisenhower carrier strike group in 2020, Vella Gulf went through three spells of maintenance during three months back in Norfolk, before a pending deployment and COVID-19 forced the crew to quarantine in late 2020.

Then there were weeks at sea in an intensive pre-deployment exercise with the Eisenhower group before Vella Gulf and the strike group set out in February for the second of its double-pump deployments.

But a fuel oil leak, discovered in the rough waters of the mid-Atlantic, forced its return to Norfolk for repairs.

“We’ve had some bad days, but with this crew, we pulled through,” Desmond said.

“Think about those cavernous spaces in engineering and a tiny leak you can barely see; we’ve got sailors right out of high school, and when they see a leak that shouldn’t be there, or an alarm that shouldn’t have gone off, they call it in,” he said.