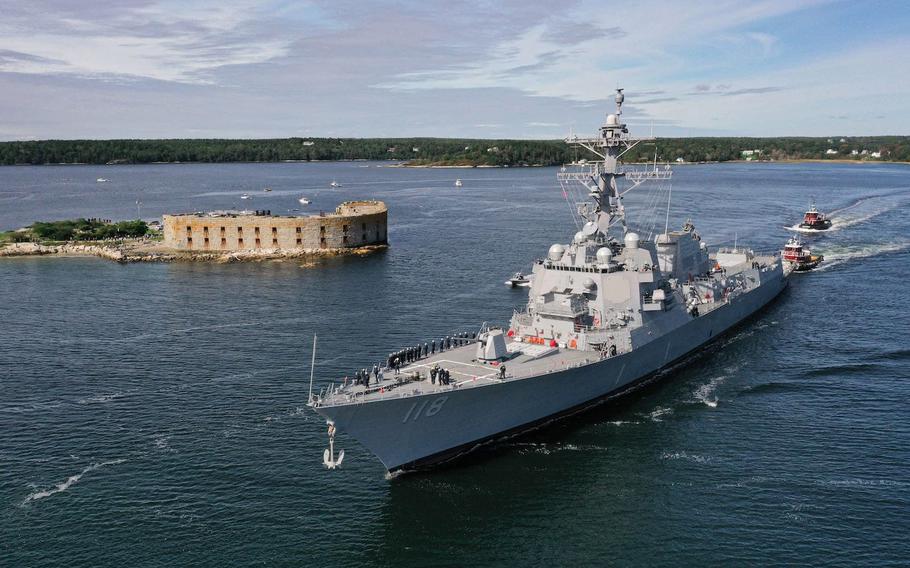 The future USS Daniel Inouye (DDG 118) transits the Kennebec River, sailing away from General Dynamics Bath Iron Works shipyard in Bath, Maine, on Oct. 4. The ship will be in Newport on Friday. ()

The Navy’s newest guided missile destroyer, the future USS Daniel Inouye will be visiting Naval Station Newport as the ship makes its way to its homeport in Pearl Harbor, Hawaii and a commissioning ceremony planned for December.

The future USS Daniel Inouye is an Arleigh Burke-class destroyer named in honor of Daniel Inouye, who served as a United States Senator for Hawaii from 1963 until his death in 2012. He received the Medal of Honor on June 21, 2000 for his extraordinary heroism in action while serving with the 442nd Infantry Regimental Combat Team in Italy during World War II.

In the Navy: Navy prep school seeks sponsor families to give students ‘home away from home’ “Following delivery to the Navy in March 2021, the entire team has continued to prepare DDG 118 for this important readiness milestone,” said Capt. Seth Miller, DDG 51 program manager, Arleigh Burke-class program office, Program Executive Office, Ships, in a statement. “The fleet will soon be receiving an advanced warship capable of performing the core roles of sea control and power projection.”

Arleigh Burke-class destroyers are multi-mission ships able to hold targets on land, at sea, in the air, and underwater at risk with a suite of sophisticated weapons and sensors.