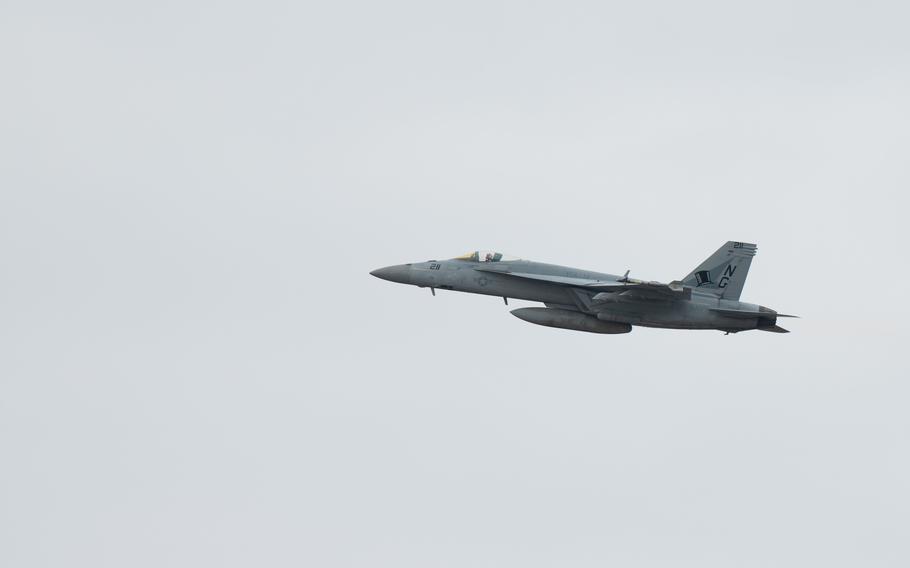 ST. LOUIS COUNTY, Mo. (Tribune News Service) — One of the area’s most important exports is under threat — and it may be getting worse.

Since last spring, the U.S. Navy has been saying it wants to make this year the last time it buys new F/A-18 Super Hornets from Boeing, threatening more than $3 billion in contracts and hundreds of jobs north of Lambert airport after 2024. Now, the service says it’s also planning to cut close to a fifth of a program refurbishing older models here and in San Antonio that was supposed to cushion the loss of new plane orders.

It’s yet another jab at a jet analysts say is one of the planemaker’s most profitable products — and a reality check for the 20-year-old line. Navy officials are increasingly insisting on putting more of their limited resources into developing their next-generation fighter, and they’re looking for money in the Super Hornet program.

A representative for Boeing acknowledged the Navy’s statement, but said the company hasn’t been informed of a loss of work.

“We have not received any contractual changes,” said Boeing spokeswoman Deborah VanNierop. The refurbishment program, she added, “continues to provide near and long-term solutions for the U.S. Navy’s requirements for strike fighter capacity, capability and readiness.”

The Super Hornet is the Navy’s all-purpose workhorse, the most common jet on carrier decks today — and a big winner for Boeing.

Designed by St. Louis-based McDonnell Douglas, it won a high-stakes competition to fill a void in the Navy’s fleet in the early 1990s, wowed in testing and entered full-rate production here the month after the merger with Boeing in 1997.

Congress has since allocated roughly $50 billion for nearly 700 jets. Together with F-15s, Air Force training jets and commercial jet wing parts, the plane is a big reason Boeing employs more than 15,000 people in Missouri, its largest presence outside its traditional home base of Washington.

Selling new Super Hornets has gotten trickier in the past decade, though. Competitor Lockheed Martin launched a next-generation fighter jet, the F-35C, in the late 2000s, and by 2010, the Navy was projecting it would stop buying Super Hornets in 2013.

But F-35 struggled repeatedly in testing. Some at the Navy also worried about its reliance on a single engine, rather than two.

Boeing pitched updated Super Hornets to Congress as a “no-drama” alternative, and Congress bought in, adding orders for four dozen more between 2015 and 2017. President Donald Trump, in a defense buildup, added 78 in 2018, enough to keep the line going through 2024. The service also kicked off the refurbishment program, which could keep older planes flying for another 10-15 years.

But, last year, the Navy began reversing course on the new planes. Officials said they needed money for research and development on a future fighter.

This summer, the Navy told a congressional committee that fewer older planes would be coming in for refurbishing.

Representatives, including Missouri’s Vicky Hartzler, R- Harrisonville, questioned how the Navy could make cuts to the Super Hornet with a fighter shortage looming. But Rear Adm. Andrew Loiselle, the Navy’s air warfare director, said the service would be able to fill the gaps by bringing in older planes and bringing some inactive Super Hornets back online.

The Navy can always put more Super Hornets through the refurbishing program if the plan doesn’t work, officials said.

“In a world full of uncertainties, now is not the time to risk operating with a shortfall of Super Hornet aircraft in the fleet,” they wrote.

They also said that buying more planes would preserve an industrial base supporting more than 40,000 jobs across 44 states and keep the line open for foreign orders that could offer further work.

But the Navy isn’t running from the dogfight. At an August conference, Adm. Mike Gilday, chief of naval operations, castigated industry lobbyists pushing Congress to contradict the service.

“Lobbying Congress to buy aircraft that we don’t need, that are excess to need, it’s not helpful,” he said.

Missouri Sens. Josh Hawley and Roy Blunt said they’ll be advocating for the new planes and the refurbishing program.

“The Super Hornet is still a good buy,” Blunt, who sits on the Defense Appropriations Subcommittee, said Friday.

Complaints about lobbying won’t matter if the rest of the Senate says the same thing.

“If the Navy and Congress have a strong disagreement, Congress wins,” said Loren Thompson, a defense industry consultant and an executive at the Washington-based Lexington Institute.

And while Boeing needs to figure out the new planes in a hurry — the last one is scheduled to roll off the line north of Lambert in just three years, a blink of an eye in big-ticket defense manufacturing — the company has still several years until the refurbishment cuts really sting.

“They’re not short-term orders,” said Richard Aboulafia, an analyst with the Teal Group. “A lot can happen between now and then.”