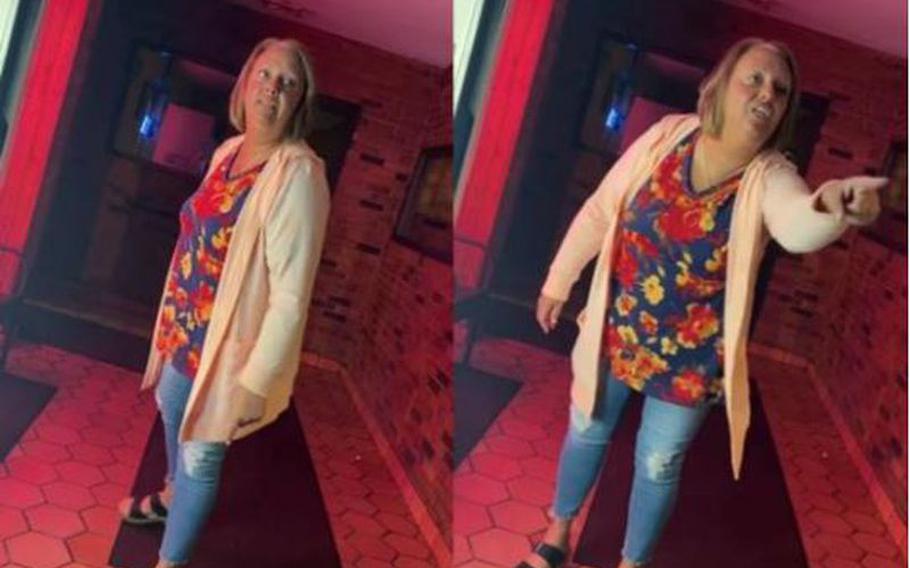 Police in Berlin, Conn., are looking for the woman shown in a video apparently slapping a man as she cursed at him at Central Pizza on Sept. 11, 2021. (Berlin, Conn., Police Department)

HARTFORD, Conn. (Tribune News Service) — A video on TikTok showing a woman shrieking and cursing at a man in a Berlin, Conn., pizzeria has prompted a criminal investigation, with police saying the victim was a Navy sailor attacked for no apparent reason.

At one point, the woman appears to slap the man — who is off camera — and yelling “this is disgusting” while flinging his cap to the ground.

The widely shared video has led scores of commenters across social media platforms to express outrage, particularly because the incident happened on the night of Sept. 11, and the victim — Sean Nolte Jr. — was apparently in uniform.

Berlin police on Tuesday afternoon distributed screen grabs of the video and asking for tips to identify the woman.

“The incident was caught on video, which has been widely shared on social media,” Acting Chief Christopher Ciuci said. “As of today we have received no information from the public that would help us identify the suspect.”

Nolte, a sailor from Harrisburg, Pa., posted the video to his Facebook page on Saturday night, and it has been shared more than 700 times since then.

Nolte’s Facebook page describes him as a submarine electronics fire control technician; he works at the submarine base in Groton.

“Tonight has been eventful to say the least,” he wrote late Saturday night. “I went to get a bite to eat off-base at a local pizza spot. As my friend is standing talking to her family, who currently owns this pizza spot, a woman walks in and is constantly staring back at me.”

Nolte described the woman yelling “He is a fake by the way, my husband is in the Army,” and then discrediting the ID he produced.

“She kept claiming that my military ID is fake, and proceeds to show me her dependent military ID, and screams ‘This is what your ID should look like,’ “ he wrote.

The video apparently begins at about that point, and the encounter escalates. The woman is seen grabbing a black cap off the counter and flinging it down, prompting a restaurant worker to warn her to leave.

“Ma’am, you’re on camera — I would leave now before I call the police,” the off-camera worker warns.

The woman gets more irate and approaches the camera.

The woman points in Nolte’s direction and yells “You disgrace the USA ... that is not a uniform you (profanity).”

“In a last ditch effort to leave, she rushes towards me and slaps me in the left side of my face. Being in uniform, I must maintain professionalism, so I stand there and proceed to wish her a nice day,” Nolte wrote.

At some point late Saturday night, an acquaintance apparently posted the video on TikTok, and another one added it to the comments on Nolte’s Facebook page.

Nolte could not be reached Tuesday, and the owners of Central Pizza, where the incident happened, did not return a message.

Nolte is a volunteer firefighter in his hometown of Harrisburg.

“Sean’s a really good guy. He joined us right out of high school and we’re lucky to have him,” said Chief Nick Wachter of Rescue Fire Company 37, a volunteer fire and EMS department. “He enlisted in the Navy so he’s not local any more, but he’s still a member.”

“Today we salute Sean Nolte Jr. of Harrisburg, who is a 2017 graduate of Harrisburg High School Sci-Tech Campus. Nolte is serving with the U.S. Navy in Groton, Conn.,” the station said. “We salute you, and thank you for your service.”