5 missing and 6 hurt after Navy helicopter crash in Pacific 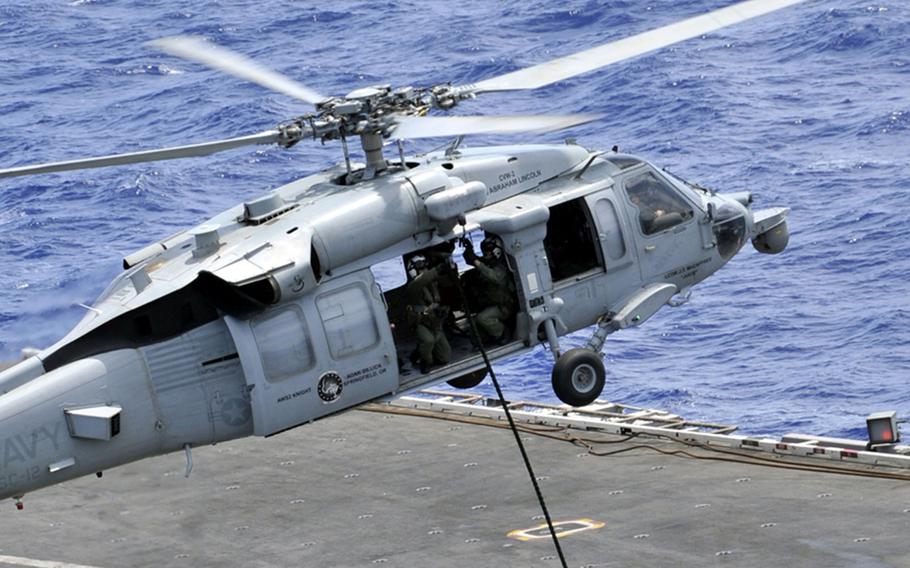 Sailors repel from an MH-60S Seahawk helicopter onto the flight deck of the aircraft carrier USS Abraham Lincoln in 2012. (Phylicia Sorenson/U.S. Navy)

SAN DIEGO — Rescue crews were still searching Wednesday for five missing sailors a day after a U.S. Navy helicopter crashed in the ocean off Southern California near an aircraft carrier, military officials said.

One sailor was rescued shortly after the crash of the MH-60S helicopter Tuesday afternoon and was listed in stable condition at a hospital in San Diego, according to a statement from the Navy's Pacific fleet.

Also injured were five other sailors who were on board the USS Abraham Lincoln aircraft carrier where the helicopter was operating on the deck before the crash, the statement said.

The statement did not say how the crash about 70 miles (112 kilometers) off San Diego happened but the fact that sailors aboard the carrier were injured raised questions about whether the helicopter or parts of it hit the Lincoln. When helicopters take off and land on the ship, there are ground crews present on the carrier nearby and other people working on deck.

Two of the injured sailors were taken to San Diego for treatment while three others were treated on board for minor injuries, the Navy said in its statement.

The crash happened while the helicopter was conducting what the Navy described only as routine flight operations.

The Coast Guard was helping the Navy search for the sailors in the chilly waters, according to the Navy.

The MH-60S helicopter typically carries a crew of about four and is used in missions including combat support, humanitarian disaster relief and search and rescue.

The aircraft belongs to the Navy's Helicopter Sea Combat Squadron (HSC) 8 and the Navy is investigating the cause of the crash.