HONOLULU — The Department of Land and Natural Resources is warning mariners and others to stay clear Thursday of the Sampan Channel area of Kaneohe Bay while the U.S. Navy detonates one of two unexploded ordnance from about 13 feet of water.

After the recent discovery of the munitions, DLNR’s Division of Aquatic Resources asked the Navy’s Mobile Diving and Salvage Unit One Detachment Explosive Ordnance Disposal to dispose of them.

To ensure the public’s safety, DLNR and Marine Corps Base Hawaii will be patrolling outside the perimeter of the bomb site, which will have a 2, 100-foot security cordon around it, while the detonation occurs.

A half hour after the first of the two bombs is detonated in place, the security cordon will be lifted. An all clear will be given no later than early afternoon.

The second unexploded ordnance will be removed from the water and taken elsewhere for disposal.

“Personnel will also be deployed as ‘animal watchers’ to ensure that marine wildlife is not in the area during the operation, “ DLNR said in a news release. “To the extent possible, under the emergency circumstances, the Navy and DLNR will take steps to prevent and minimize adverse impacts to marine wildlife.”

The National Oceanic and Atmospheric Administration will also have monitoring and response teams on site before and after the operation to assist with preventing and minimizing potential harm to marine mammals and sea turtles.

To report strandings and other incidents, call NOAA Fisheries Marine Wildlife Hotline at (888 ) 256-9840. 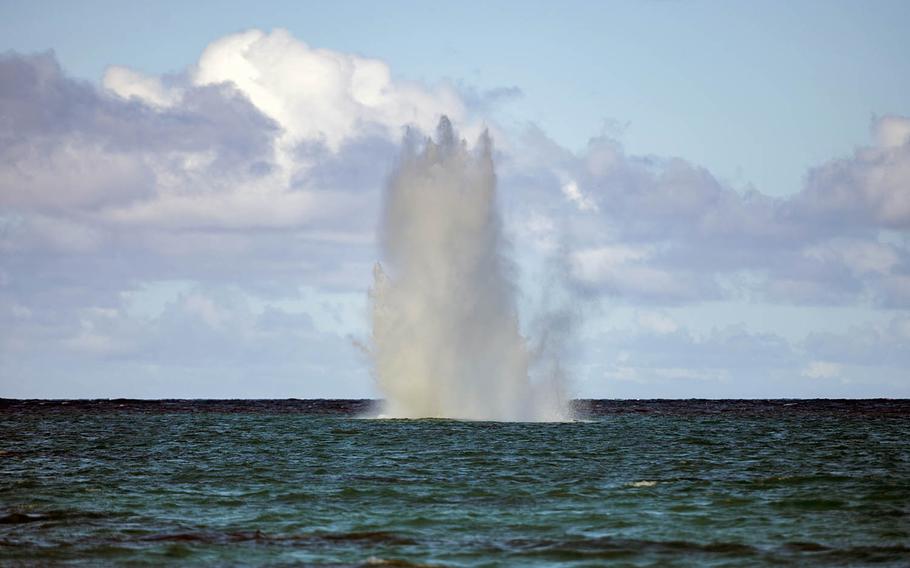