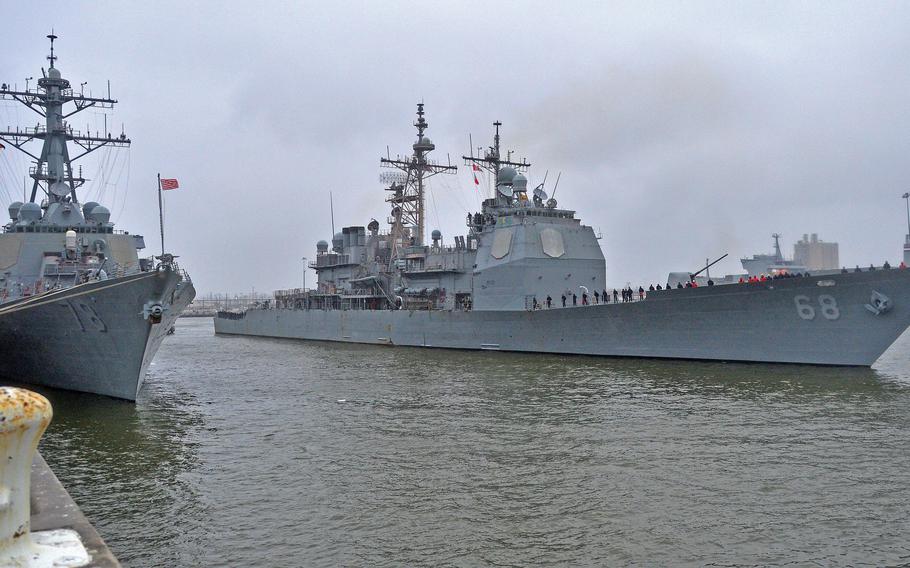 The Ticonderoga-class guided-missile cruiser USS Anzio (CG 68), right, departs Norfolk Naval Station in March 2015. To pay for the ships and unmanned vessels the Navy hopes to build over the next few years, it wants to decommission seven cruisers. (Rafael Martie/U.S. Navy)

NORFOLK, Va. (Tribune News Service) — To pay for the ships and unmanned vessels the Navy hopes to build over the next few years, it wants to decommission seven cruisers — five of them based in Norfolk — a move the two Virginia representatives on the House Armed Services Committee’s sea-power panel plan to contest.

Cruisers have a critical role in the U.S. Navy, says Democrat Rep. Elaine Luria, whose 2nd District includes Virginia Beach and parts of Norfolk. Luria spent some of her time in the Navy as executive officer of the cruiser USS Anzio.

Cruisers serve as the air defense center for carrier strike groups, with a team of sailors responsible for tracking aircraft and missile movements around the group. That means figuring out within minutes if a signal on radar or other sensors is a threat, and if so, how to block it.

In addition, cruisers carry more guided missiles than other ships, with 120 cells compared to 90 for guided missile destroyers and 24 for carriers, Luria said.

Cruisers’ weapons include the Sea Sparrow anti-aircraft and anti-missile system and the long-range Tomahawks that strike land targets, like the Syrian chemical weapons facilities the Navy took out in 2017, Luria said.

“There’s really nothing that will be able to replace them in the next five years,” she said.

The Navy’s argument comes down to money.

The cruisers are aging — the warships slated for decommissioning were delivered between 1988 and 1993 — and Vice Adm. Jim Kilby, deputy chief of naval operations, told the sea-power subcommittee earlier this summer that it would cost nearly $2.8 billion to retain all seven in service over the next two years.

The price tag to modernize just USS Anzio and Hue City is about $1.5 billion, he said.

Earlier this year, repairs to Vella Gulf kept it from joining the USS Dwight D. Eisenhower for 2½ months, he said. The cruiser had to return to Norfolk just days after deploying with the strike group in February when crew members found a fuel oil leak while operating in heavy seas.

In mid-March, while at sea to test repairs to its fuel oil system, crew members found another leak, requiring a return to port to replace a deteriorated tank top. In early April, as the crew prepared to head out to sea again, they discovered bits of metal and welding slag in the lube oil system. Cleaning and flushing it took another two weeks,

“All that, in my mind, has to go into the mix when we factor the availability and reliability of those ships,” Kilby said. ”Those missile tubes will only count if they’re underway alongside the carrier.”

The sea-power subcommittee has formally approved the Navy budget that calls for decommissioning the seven cruisers, comprised of the Norfolk-based USS Anzio, Hué City, Monterey, San Jacinto and Vella Gulf as well as a cruiser based in San Diego and another in Pearl Harbor. More than 1,500 men and women serve on the Norfolk ships.

But the real debate begins next month, when the full committee begins digging into, and revising, the budget submitted by the Navy — the process Capitol Hill calls “mark-up” — and the fate of the cruisers will be a key topic, said Luria, who is vice-chair of the committee

China’s increasingly aggressive posture in the western Pacific is a big worry, said Wittman, who is the most senior Republican on the sea-powers subcommittee. U.S. Navy cruisers could be a big help in lowering the temperature there.

He thinks the Navy’s whole budgeting approach — which it has tagged “divest to invest”— needs a harder look.

The underlying idea, from the Navy’s point of view, is that using funds to maintain older ships will slow the pace of developing the new weapons and technologies it needs, particularly unmanned vessels.

Luria worries that, just as with the rising costs and postponed deployment of the carrier USS Gerald R. Ford, the Navy may be committing to new technologies before it, and Congress, know how much time and money will be needed to launch the ships needed to replace the cruisers.

Slowing the pace of funding for new technology so that it is more in step with the pace of development would free up funds to keep at least some of the targeted cruisers in service.

So, too, would a hard look at the practice of splitting the defense budget into thirds to be equally shared by the Army, Air Force and Navy, Luria said. The shift of strategic concern from terrorism to the threats posed by Russia and China suggest the Navy and Air Force may need a larger share.

And, she said, it is hard to see how to boost the fleet to a total of 355 ships — a goal set just a few years back — if the Navy decommissions more ships over the next couple of years than it plans to build.

“It just doesn’t make sense to decommission ships when you want to get to 355,” she said.