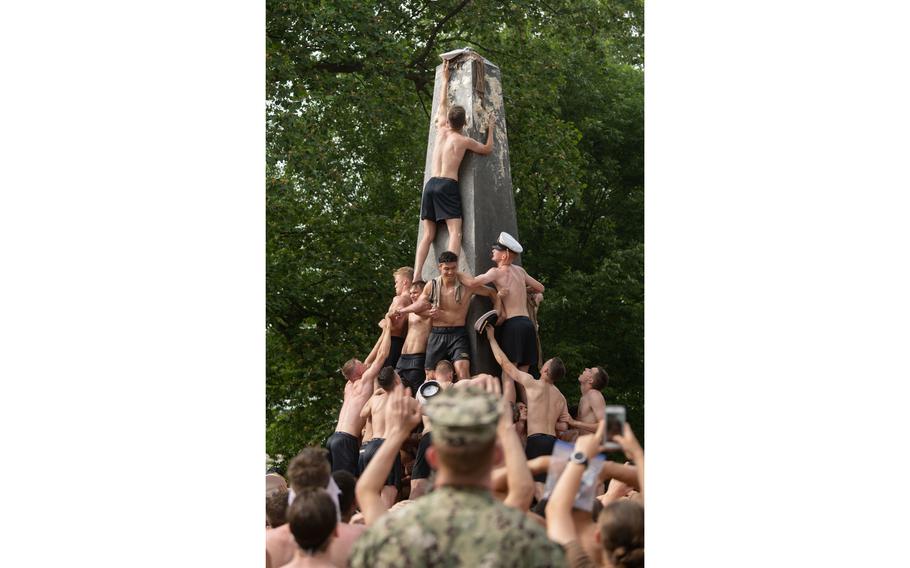 Midshipman 4th Class Michael Lancaster, 19, from Signal Mountain, Tenn., places the midshipman cover atop the Herdon Monument. The class of 2024 completed the climb in 3 hours and 41 minutes, the second-slowest recorded time. The class of 2023 will get their chance to complete the climb Sunday, Aug. 22, after the climb was canceled in 2020 due to the pandemic. (Dana Legg/U.S. Navy)

ANNAPOLIS, Md. (Tribune News Service) — Midshipmen 2nd Class will get their chance to climb a greasy obelisk and place a cap on the top.

The Herndon Climb is back, for the second time in 2021. This time, instead of greasing the monument, the U.S. Naval Academy's class of 2023 will be the one attempting to climb to the top.

The climb, which typically marks the end of the plebe year, will return Sunday with formation starting at 1 p.m. and the actual climb beginning at 1:30 p.m. The event will be opened to the public, unlike the climb in May, and will be live-streamed.

The climb was canceled in 2020, when the class of 2023 were plebes, due to the pandemic. Superintendent Vice Adm. Sean Buck and then-Commandant of the Midshipmen Rear Adm. Thomas R. Buchanan instead did a modified version of the climb on behalf of the plebes. The two men climbed ladders to replace the plebe cap on top of the Herndon Monument and declared plebe year over.

However, academy leadership determined the class of 2023 should be able to participate in the tradition. While the class might not be as excited about participating, years from now, its members will not want to be the only class in modern history not to complete the climb, Commandant Col. James P. McDonough told The Capital.

The climb is also about teamwork, which is a hallmark of the academy and its lessons, he said.

Despite the class no longer being plebes, the midshipmen will still need to replace a plebe Dixie Cup with the Navy cover issued at the end of plebe summer, said Elizabeth Wrightson, spokesperson for the academy, in an email.

There's also a competitive edge to Herndon. No one wants to be the class to take the longest. McDonough has thrown down the gauntlet to the class of 2023, saying its members should get the cup off and cap on quickly since they are not plebes.

The current record for Herndon is 1 minute 30 seconds, which goes to the class of 1972, according to the academy. Grease was not applied that year. The longest time is 4 hours, 5 minutes and 17 seconds. The class of 1998 struggled to remove the cap, which was taped and glued.

The class of 2024 finished in 3 hours and 41 minutes. The class was led by the 14th company, which earned the first run at the obelisk after winning Sea Trials.

The Class of 2022 will grease the obelisk, as it would have if the climb had taken place in 2020, with up to 50 pounds allowed, Wrightson said. Companies will be lined up numerically. Typically, the first company to take a run at the monument is the one that won Sea Trials. In 2020, the Iron Company honor was given to the 12th Company, which won E-Trials, a modified version of Sea Trials due to pandemic restrictions.