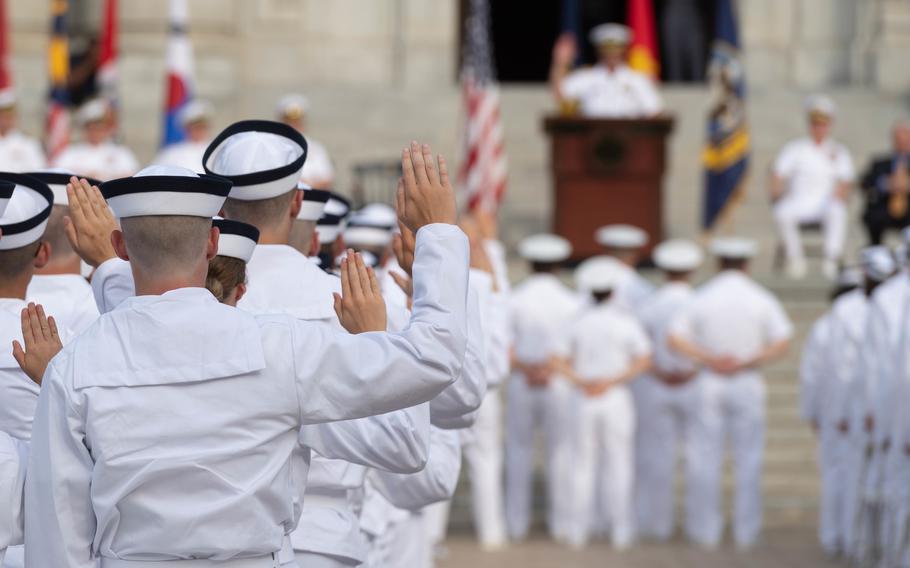 The United States Naval Academy welcomes the incoming Midshipmen 4th Class, or plebes, of the Class of 2023 during Induction Day 2019 on June 27, 2019. (Stacy Godfrey/U.S. Navy)

(Tribune News Service) — A February halt to Department of Defense advisory boards has prevented the Naval Academy Board of Visitors from meeting since 2020.

The board was scheduled to meet in May, ahead of the Naval Academy’s commissioning. That meeting was scratched due to Secretary of Defense Lloyd Austin’s Jan. 30 order that prevented any of the DOD advisory boards from meeting until his office finished a review of them.

It is not clear what would have been discussed in the meeting, although it is likely that Superintendent Vice Adm. Sean Buck would address the February COVID-19 outbreak at the academy. It is also possible he would have given an update on the inconsistencies with a physics final in the fall. The academy does not have an update on the physics situation, said academy spokesperson Cmdr. Alana Garas.

The board is next scheduled to meet in September, and chair Rep. Dutch Ruppersberger, D- Md., is confident that the review will be concluded in time for the meeting to take place, he said. The January order required the Naval Academy Board of Visitors zero-based review to be finished by April 30.

The board’s statute requires it to meet once a year, Ruppersberger said. Although it typically meets three times — once in May, September and December.

The halt frustrated the members of the service academy boards, Ruppersberger said. He, along with Steve Womack, chair of the U.S. Military Academy Board of Visitors, sent Austin a letter requesting a meeting about the two boards’ inability to meet.

“While we do not make a value judgement on your prerogative to conduct the ZBR, we would like to express to you the collective frustration of our respective board members with the ZBR’s impact on our ability to provide productive oversight of our service academies,” the congressmen wrote. “We appreciate the periodic updates by DoD staff but are facing untenable frustration from BoV members that we can no longer ignore.”

The review is meant to ensure advisory committees are aligned with the National Defense Strategy, according to the January memorandum ordering the halt. For the review, each advisory board was assigned a DOD sponsor. In the Board of Visitors’ case, it was the secretary of the Navy.

“With regard to the zero-based review, each DoD Sponsor will conduct an in-depth business case of every sponsored advisory committee, supported by fact-based evidence for continued utilization of the advisory committee,” according to the order.

The Hill reported that the review was in part triggered by the Trump administration nominating several Trump loyalists to committees after the November election. Trump appointed former press secretary Sean Spicer to the board in January 2020.

Unlike some of the other committees being reviewed, the Naval Academy Board of Visitor members are not appointed by Austin, rather members of Congress and the president. Austin cannot remove or appoint members to the board.

However, the review might result in recommendations to Congress that would see the boards for all the service academies line up more closely in terms of required meetings and how long members serve, said Elliot Phaup, who works in Ruppersberger’s office. For example, the Air Force board must meet twice a year, while the boards overseeing the Naval Academy and West Point must meet once.

The boards provide oversight to the academies, said Rep. Anthony Brown, D- Md., in a statement.

“We have a responsibility to ensure our Navy and Marine officers receive the very best education needed to lead the next generation and keep us safe at home and abroad,” Brown said in his statement. “The U.S. Naval Academy Board of Visitors is critical to ensuring this institution receives the resources it needs and upholds our shared values of service and inclusion. This is serious work, and I applaud Secretary Austin for his commitment to reviewing the Department of Defense Advisory Boards to make sure they are meeting their established mission after the frenetic activity of the outgoing Administration last year.”

The Naval Academy referred questions to the defense secretary’s office.

Most of the committee review has been done, Pentagon Press Secretary John F. Kirby said in a press conference. The defense secretary is now going over the recommendations and deciding the next steps.