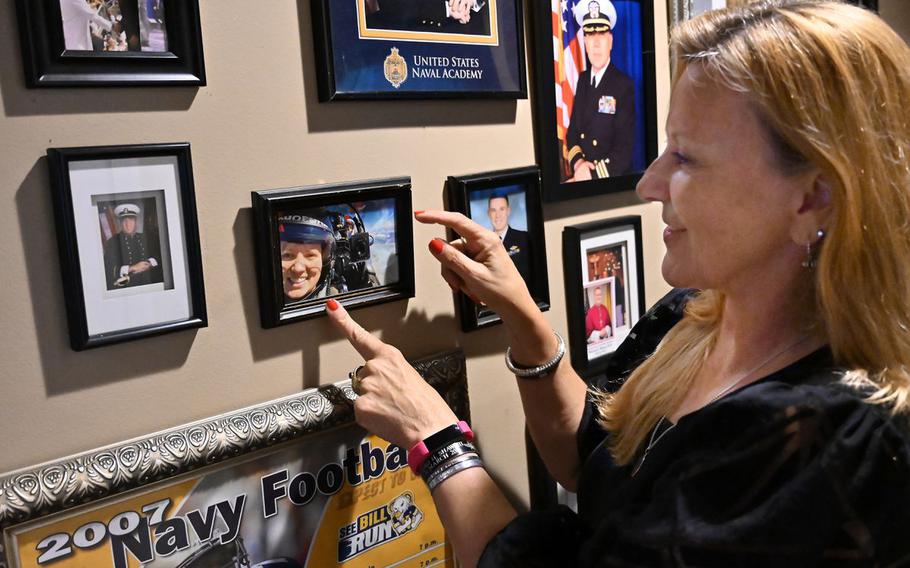 Judy Buddensick has been sponsoring midshipmen at the U.S. Naval Academy for more 20 years. She officially started with the class of 2003. (Heather Mongilio, The Capital/TNS)

Men and women in uniforms smile from their frames. A few items of military memorabilia accompany them on the walls. Challenge coins in a case. A folded flag in another.

The men and women are Buddensick’s sponsor sons and daughters over the years. And it’s been many years.

They’re her heroes, she said in a text message showing off the wall of frames.

Buddensick has been sponsoring mids for more 20 years. She officially started with the class of 2003.

Buddensick first sponsored the daughter of her nephew’s best friend, Buddensick said. Her nephew called to ask her if the new midshipmen could come to her house, and Buddensick agreed.

That’s how it started for the Annapolis resident. She would take in the midshipmen coming from friends.

“And then they bring their friends, and it is a house full of strangers that all become family,” Buddensick said. “So it just kept going. And it spread.”

Midshipmen would then bring their friends over to Buddensick’s residence, known by the midshipmen as Judy’s House.

In the past academic year, Buddensick officially sponsored nine midshipmen. There were two firsties who graduated, two midshipmen in their third year at the academy, two in their second year and three plebes. She requested two more from the class of 2025.

Each one becomes part of the family Buddensick created with midshipmen.

But Buddensick has a specialty when it comes to sponsoring. Her home has welcomed many international students at the academy.

Stop by “Judy’s House,” and one can hear multiple languages as midshipmen call home, Buddensick said.

There have been midshipmen from Lebanon, Montenegro, Thailand, Poland, Belize, Jamaica, Brunei, Jordan, Mauritius, Egypt, Madagascar. When one of Buddensick’s sponsor sons got married, while teaching at the academy, his sponsor siblings gave him an international sword arch, a rare occurrence at an academy wedding.

Buddensick’s house became a sort of melting pot, where people from different countries, including the United States, would come to learn about other cultures, said Capt. Blake Roper, a member of the Jamaican Defense Force, who graduated from the academy in 2014.

He became part of Buddensick’s family, and she became part of his, Roper said. Since he graduated, he has come back to see Buddensick at least once a year, outside of 2020 due to the COVID-19 pandemic. Buddensick has also visited him in Jamaica and met his family.

While he was at the academy, Buddensick’s house became a safe haven and not because it was a place where there were other international mids.

“It was who she was and the environment that she created that made me so welcome and feel at home,” Roper said.

Buddensick has a bubbly personality, he said. She’s very personable and always made him feel like he mattered. He knew he had a place he could go outside of the academy walls.

Buddensick took her mids under her wing and introduced them to her network in Annapolis, said Marine Capt. Seth Montgomery, who graduated from the academy in 2015.

It also introduced him to multiple cultures, having sponsor siblings from Jamaica, Belize and Poland.

Montgomery was from Washington, which at first felt alienating when he arrived at the academy. But Buddensick made him feel like he could call Annapolis home.

“Judy has an enormous heart,” he said. “She wants to show love and give love to everyone she meets.”

That extends to the unofficial sponsor children, like Lt. Cmdr. Rob Molinaro. He met Buddensick through his friends, and although she was never assigned by the academy, she became Molinaro’s sponsor mom.

The two bonded over a shared taste in music and being affected by Sept. 11, 2001. Molinaro grew up in New Jersey, close to New York.

Life at Buddensick’s home was a chance to relax, Molinaro said. He could call to let Buddensick know he would come over, then swing by to be able to catch up on sleep, watch movies, listen to music, and lounge.

No. 4: Don’t light the electric lights on fire. No. 13: No wrestling near the Christmas tree.

“A lot of these rules have come out of real life situations,” Roper said, adding that it was interesting some rules needed to be made.

“That bond that goes beyond,” Buddensick said. “We’re family forever.”

She tries to visit her sponsor children when she can, and they try to come back to her home when they can.

“I don’t care what rank they are .... they’re still my sponsor kids,” she said. “They’ll always be my babies.”

And like some military families, Buddensick has known loss. One of her sponsor sons, Marine Capt. Stanford “Ford” Henry Shaw III, was killed in a training exercise in March 2015.

She makes sure that all of her sponsor children know about Shaw, she said. Montgomery wore Shaw’s commissioning uniform during his own commissioning ceremony. Montgomery knew Shaw because he would come back to visit.

Creating a warm, safe environment is not unique to Buddensick, Roper said. There are sponsor homes that also welcome multiple midshipmen in and give them a place to relax outside of the academy.

“But there is no place like Judy’s house,” Roper said. “No place can replicate that family, that love, that environment.”