Submariner with Indo-Pacific experience takes on Navy command on Guam 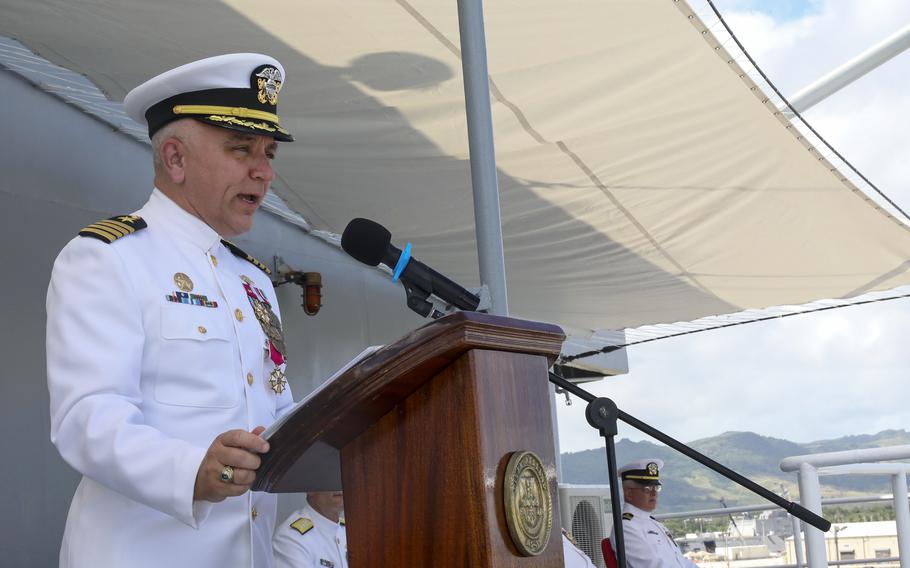 A veteran submariner with three recent deployments in the Indo-Pacific region aboard a submarine tender took the helm of U.S. Naval Base Guam on Monday.

Capt. Michael Luckett relieved Capt. Jeffrey Grimes during a ceremony at the base’s Cmdr. William C. McCool Elementary/Middle School. The day provided significant memories for the outgoing Grimes, who took command of the base in July 2018.

“This place at this time of year has a very special meaning for me for several reasons,” he said. 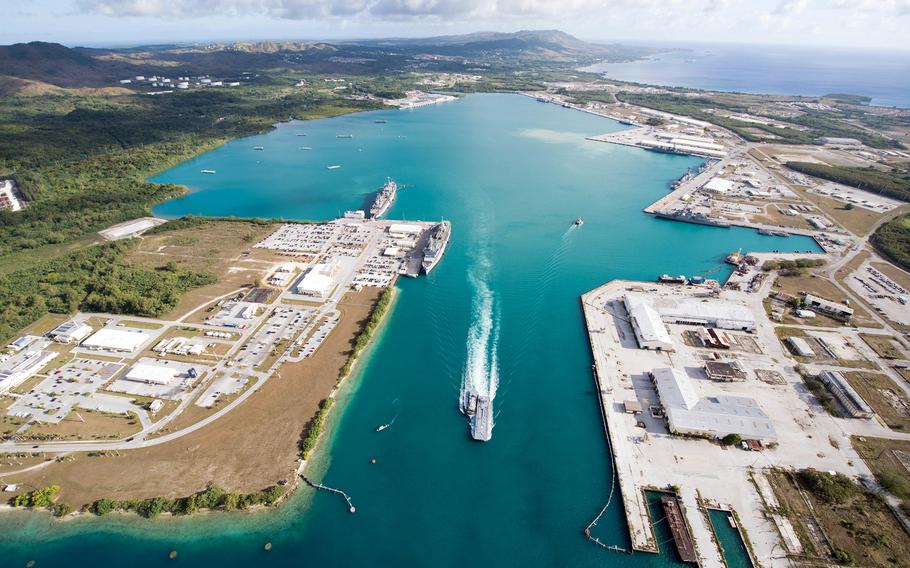 The cafeteria and gymnasium were the first shelters for crew of the aircraft carrier USS Theodore Roosevelt when COVID-19 broke out aboard the ship while at sea last year, Grimes said. COVID-19 is the respiratory disease caused by the coronavirus.

The episode proved a defining moment for the Navy early in the pandemic.

The Theodore Roosevelt’s commander at the time, Capt. Brett Crozier, reported the first of 1,273 cases of COVID-19 aboard the ship on March 24, 2020. The carrier steamed to Guam and off-loaded its crew of 4,800, one of whom, Chief Petty Officer Charles Robert Thacker Jr., 41, died weeks later at the naval hospital there. Crozier’s handling of the outbreak led to his dismissal.

The pandemic dominated Grimes’ tenure as base commander. He oversaw the construction of a 150-bed emergent medical facility and the creation of standard procedures to address outbreaks like the one aboard the Theodore Roosevelt, according to an email Saturday from base spokeswoman Theresa Cepeda.

At McCool, 300 children eventually finished a full year of in-person learning during the pandemic, Grimes said during his farewell address. And, he said, the change of command happened just two days from Guam Liberation Day, when the U.S. territory marks its liberation from Imperial Japan during World War II.

“No matter what challenge falls our way I know that everyone — in uniform and in island casual — will show up to fight, stand side-by-side with their neighbor, lend a helping hand,” Grimes said, “and we will defeat whatever challenge that is placed before us.”

Luckett, a native of Banning, Calif., most recently commanded the USS Emory S. Land, the lead ship of the Emory S. Land-class submarine tenders. Under Luckett, the Land spent more than 10 months in the Indo-Pacific region, including three deployments with the U.S. 7th Fleet before returning to its homeport on Guam, according to Cepeda.

Luckett graduated from the Naval Academy with a bachelor’s in naval architecture and went on to command the fast-attack submarines USS Mississippi and USS Missouri. He served as an officer on three other submarines: the USS Jefferson City, the USS Houston and the USS Pennsylvania.

He earned master’s degrees from the National Defense University, Naval Postgraduate School and the University of California, Berkeley, according to his LinkedIn profile.

“I am excited, honored and humbled to have the opportunity to lead this fantastic team. Each of you plays an important part in executing the mission of Naval Base Guam,” Luckett said during the ceremony. “Your efforts enable the mission readiness of our homeported ships, our shore-based commands and our visiting units.”