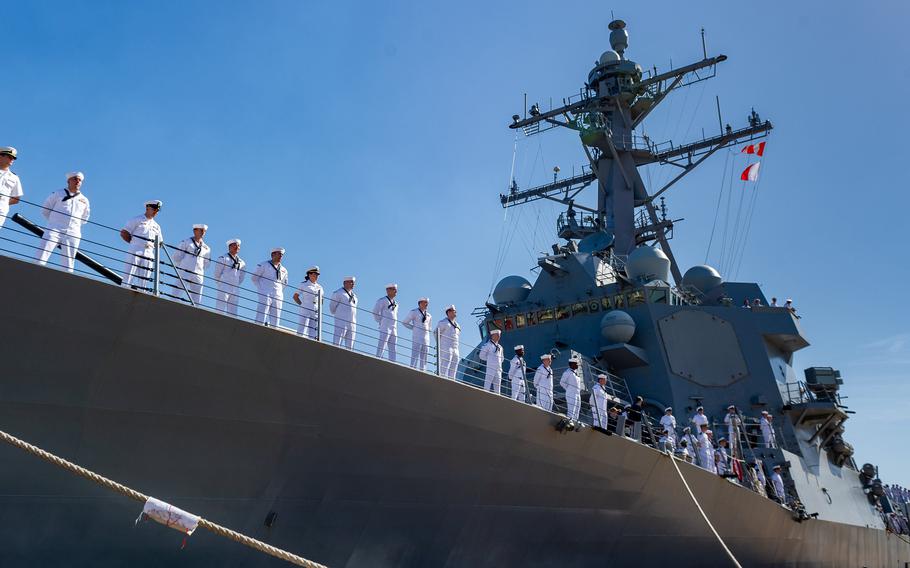 Crew members of the USS Thomas Hudner (DDG 116) line the rail of the Arleigh Burke-class guided-missile destroyer as it returned to its homeport of Naval Station Mayport on Saturday morning after its maiden deployment. It supported operations in the 5th and 6th Fleet areas of responsibility. (Fran Ruchalski/The Florida Times-Union)

Hugs, kisses, cheers and seven new babies greeted the officers and crew of the USS Thomas Hudner on Saturday as they returned home to Naval Station Mayport from the ship's maiden deployment.

The Thomas Hudner was the first of a trio of Arleigh Burke-class guided-missile destroyers scheduled to arrive over three days at the Navy base.

Shavon Echols drove from Athens, Ga., to welcome home her daughter, Shatoya Echols, a culinary specialist returning from her third deployment since joining the Navy in 2008.

Echols and her sister Yvette Mathis held up a homemade brightly colored banner reading "Welcome Home We Missed You, Shatoya!!!" that was decorated with a hand-drawn house. The sign was made by Mathis' young daughter who stayed up till 2 a.m. to finish it, Echols said.

It's hard though, she said, not to worry about her daughter and shipmates.

"Especially this last time. It just felt like we were almost at war a lot," she said. "It seemed like we weren't at peace with other countries and that just made me nervous."

Mother and daughter already had a homecoming plan worked out before the ship tied up at the dock.

"The first thing she's going to do is move into her new apartment," Echols said. "The movers are already getting everything out of storage and set up. When she gets here, we'll go to the new place, get everything unpacked and take a nap. She'll get to sleep in her own bed tonight." 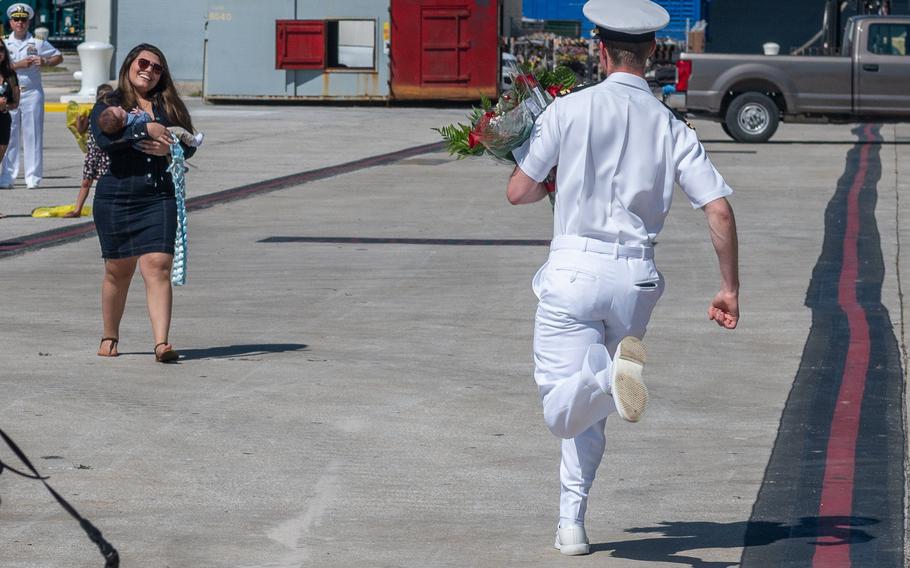 Alex Souter sprints down the dock to wife Daniela Souter as she holds their newborn son, George. He was among seven fathers who got to meet their new babies for the first time as the crew disembarked from the ship. (Fran Ruchalski/The Florida Times-Union)

The vessels each have about 300 to 330 sailors, Navy officials said.

The Cook and Churchill are the most recent destroyers involved in a series of homeport changes resulting in a buildup of those warships at Mayport — replacing the amphibious vessels at the Navy base.

The Hudner was on its first six-month deployment but also spent another month at sea for a total of seven away from its Mayport homeport.

"The resiliency of this crew with everything that they endured in the COVID-19 pre-deployment, then be able to get underway and go overseas in the next few missions is nothing short of amazing," Cmdr. Bo Mancuso, commanding officer of the ship, told reporters at the base.

The Hudner took part in multiple maritime security exercises involving vessels from the United States and its allies, the Navy said.

Operation Inherent Resolve is a joint military task force against ISIS, according to the U.S. Department of Defense.

Mancuso said the Hudner is a flexible warship capable of carrying out multiple missions.

The 2 1/2-year-old warship is "primarily an air defense platform but fully capable of land attacks, surface attack and anti-submarine attack as well," the commander said.

Families weathered the sweltering heat and humidity on the dock without complaint as they waited for the ship. Many held up homemade signs including "Here to Kiss AD2 Chang," " Welcome Home Sailor, You're Our Hero" and "Welcome Home Dad The Family Got Bigger."

Sailor Jonathan Harder was welcomed by his sons 2-week-old Ezekiel and 1-year-old Jupiter along with their mother, Paige Harder, and her mother, Kristi Gambrell.

"I'm ready to see him. It's been a while," his wife said. After the hugs and kisses, she said the first thing they are going to do is have a "welcome-home" meal together.

The destroyer reassignments will result in Mayport getting five of the vessels by the end of next year, according to the Norfolk-based Naval Surface Force, Atlantic.

The command said it is balancing the reassignment between the two ports so it will have "a negligible economic impact on either community."

The destroyer USS Jason Dunham arrived at Mayport in February as part of the changes.

The Cook has spent seven years supporting 5th Fleet operations. It was a Forward Deployed Naval Forces-Europe unit. It departed Rota en route to Mayport on June 30, the Navy said.

The ship recently has been in the Aegean Sea where it performed exercises with the USS Roosevelt, another destroyer previously was based at Mayport.

Sunday will be the first time the Cook arrives at its new homeport in Mayport.

Then Monday it will be the Churchill, the first destroyer and fourth Navy warship named after a British citizen, Navy officials said.