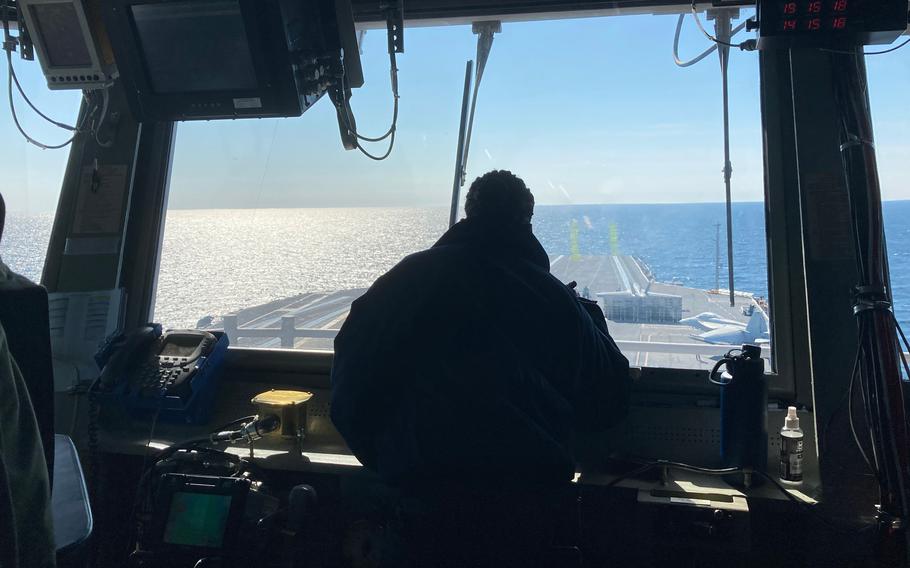 High up on USS Gerald R. Ford's island, controllers in the carrier's primary flight control are just some of the dozens of eyes watching for hazards as pilots take off and land every minute or so, working on their carrier qualifications. (Dave Ress, The Daily Press/TNS)

It is when the National Hurricane Center says a storm is 96 hours out that the Ford’s meteorologists, like their counterparts across the Navy, set into motion the many steps it takes to batten down the hatches of a modern warship.

The Ford is back in Norfolk, taking a breather from this summer’s series of full ship shock trials — the test where explosives are blown up close to a warship to see how it fares — so one critical task for the meteorologists isn’t an issue.

If they were, Chamberlain and his team would be briefing the captain and the rest of the Ford’s leadership on what the hurricane center’s probable path and wind speed forecasts, and the ship’s position, suggested about a course to steer for safety.

As he does, the Ford’s departments work on their storm checklists — the action plans they drilled on back in May — covering everything from preparing extra mooring lines to securing any equipment that could be damaged by high winds or rough seas.