USS Eisenhower relies on ‘sailor-engineering’ to tackle challenges at sea 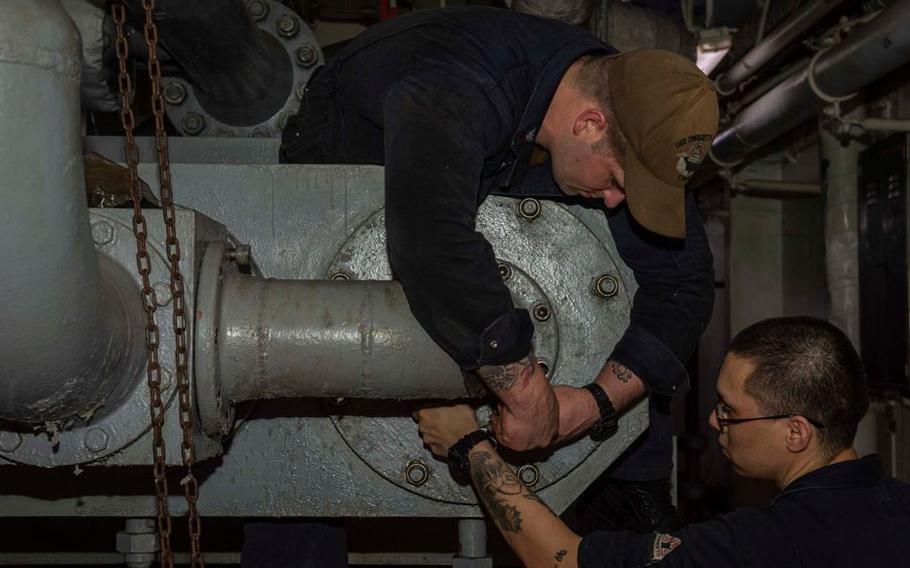 The carrier’s air wing was still in the air.

Wrestling with a 49-inch wrench to lock the rudder into place as the bridge crew worked to maintain heading into the wind in order to bring all the planes in safely, the carrier’s engineers knew they had to find a solution.

They transmitted detailed photos of the leaking, thumb-sized vent plug — probably untouched since it was installed four decades earlier.

Replacing the 20-foot-long cylinder would be fairly straightforward at a shipyard, but a major challenge at sea, which was what they feared they’d have to do.

Hornef hears that pretty often from his sailors, as they draw from their days on a farm or garage before signing up, their initial training and their on-the-job experience, whether with at-sea repairs or working alongside shipyard workers when the carrier is in port for maintenance.

In this case, Knopsnyder’s idea was to machine a temporary plug using a lathe in the Eisenhower’s machine shop to shape a piece of high-strength metal to exactly the right size and angle-pitch to fit and plug the leak. Knopsnyder, an eight-year veteran sailor whose rating is as a machinery repairman, sketched a drawing; Hornef shared it with the experts back in the States. They all agreed it could work.

It did. Within 24 hours of discovering the leak, the starboard rudder was back in action.

“I’m always amazed at what our sailors can do. I don’t think there’s another Navy on the planet that can do what we do ... maintaining self-reliance,” said Capt. Paul Campagna, the Eisenhower’s commanding officer.

Sailors from the Eisenhower’s engineering department tackle more than just the challenges of a 43-year-old ship that has spent those years on rust-inducing salt water.

The carrier’s sailors backstop their counterparts on the smaller ships of the Eisenhower’s strike group, which left Norfolk in late February for operations off European and African shores and most recently in support of U.S. troops in Afghanistan.

The Eisenhower’s shops have the special machines that can rewind electric motor cores, and the carrier’s sailors have repaired several from the strike group’s guided-missile cruiser, USS Monterey, and destroyers USS Mitscher and USS Thomas Hudner.

While sailors on those ships share the same kind of expertise as the Eisenhower’s engineering team, the vessels don’t have the space available to house all the equipment a 1,092-foot Nimitz-class carrier can.

Sometimes it takes extra hands to make a job go right. Eisenhower’s sailors have visited those other ships to lend a hand on big repair jobs. That’s easier in these pandemic days because the strike group’s 5,000 sailors were early, and enthusiastic, participants in the Navy’s program of shipboard vaccinations. Pioneered in Norfolk, it made it easier for them to move between ships.

But the pandemic has meant Navy ships on deployment don’t have the same options for port calls or quick shipyard visits they once did. As a result, the Eisenhower’s sailors have to be even more self-sufficient and self-reliant than usual, without cutting back on the number or timing of their military missions, Campagna said.

One example: though a hydraulic fluid leak on one of the Eisenhower’s four aircraft elevators put it out of action, the carrier didn’t stay in Norfolk, or return to the Norfolk Naval Shipyard, when ordered to deploy.

The leak was in a 13-inch diameter cylinder, part of one of the main lifts for an elevator that’s the size of a typical house’s yard and capable of hoisting two semi-trucks the 25 feet between the hangar deck and the flight deck. It works by pushing hydraulic fluid, at pressures of 2,500 pounds to the square inch.

The Eisenhower’s flight- and hangar-deck crews figured out workarounds, whether for moving the air wing’s planes or for shifting the thousands of pounds of supplies, fuel and groceries the carrier took on from its at-sea replenishments — the complex operation in which it and a supply ship operated side by side at close quarters while moving cargo from one to the other.

Petty Officer 1st Class Victor Herring Logan took the lead on the elevator job as the Eisenhower steamed east from Norfolk. He and Petty Officer Jimmy Flores designed a tool that they figured could use the leverage of the cylinder’s internal piston to move fluid away from the leaking gaskets, so that those seals could be replaced.

It was tool that had to fit within a few thousands of an inch inside the cylinder, in order to prevent any fluid from erupting from it.

It took some trial and error to get a handle long enough to give them the leverage they needed — but in the end, they got it, Hornef said.

“This is what you call sailor-engineering,” he said.