CHICAGO (Tribune News Service) — This spring, hundreds of Navy personnel and their families entered the second floor of a more than 100-year-old USO center at Naval Station Great Lakes to see how it had been renovated for a new century.

“Before, it was (15,000) square feet of dark space with a lot of walls and rooms,” said Chris Miller, the center’s operations director. “We opened up the center so there’s a lot more light. It’s all modern and new.”

Construction for the $2.9 million remodel at the USO Great Lakes Center began in October, after four years of discussing, planning and designing a facility that could adapt to meet the ever-changing needs of military personnel and their families, said Alison Ruble, president of the USO Midwest region. The center had been “well-loved and well-used” and was due for an update, Ruble said, and private and corporate donors raised more than $3 million to pay for it.

The building housing the USO center was constructed in 1906, when the rest of the naval base was built. Previously used as barracks, classrooms and a medical center, USO opened a center there in the early 1980s.

The USO, a nonprofit, nongovernmental agency, operates more than 250 centers worldwide, including at Midway and O’Hare airports and in Rock Island and Springfield. A “home away from home” for active service members and their families, USO centers offer community-building programs for military spouses and children, Ruble said.

The Great Lakes renovations were “one of the largest” ever completed by the organization, according to a news release. Though the USO isn’t a government agency, it worked closely with the Navy leadership on the base throughout the construction process, Ruble said.

Naval Station Great Lakes is the largest Navy training site and home of the only Navy boot camp.

Closed-off rooms and low ceilings used to fill the USO Great Lakes Center. The center didn’t have air conditioning, so all the windows had blinds that were almost always closed to keep the center a bearable temperature during the hot summer, Miller said.

New air conditioning and heating systems were installed as part of the renovation, which prioritized an open-concept floor plan that takes advantage of the natural light from a skylight and myriad windows, said Christopher Schmidt, executive director of USO Illinois. And the few walled-up rooms the center still has are “very intentional,” Schmidt said: a kid room, reflection room, gaming room and a USO Pathfinder office, a program that helps military personnel transition back to civilian life after they finish serving. 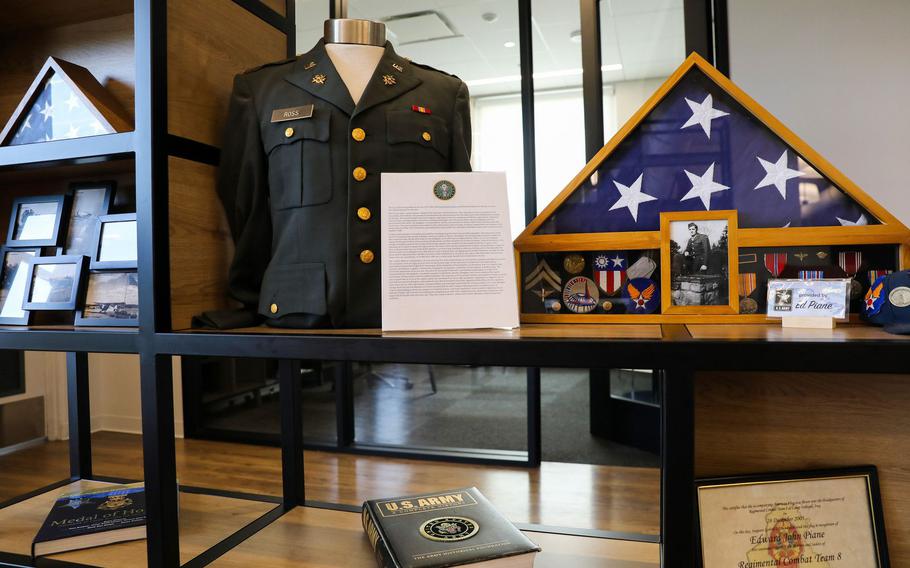 The kitchen area serves as the “epicenter” of the Great Lakes center, with a “quiet wing” to the left and an “entertainment wing” to the right, Schmidt said.

The quiet side features sound-absorbing material on the ceiling and laptop stations. Though the entire floor follows an open-concept design, sections of it provide ample study space for military students. Historical photographs and relics fill shelves partitioning the floor, recounting the heritage of the 1906 building and surrounding naval base, he said.

The kid room tucked in the back corner, with foam blocks and a toy cash register station, was something the old center lacked, Schmidt said. Military families “should have a place to keep their toddlers without having to worry that they could run away,” he said.

Input from service members and their families greatly shaped the design of the center, Schmidt said. USO’s priority is to meet the needs of the more than 75,000 people who visit the Great Lakes center in a given year, he said.

On the other side of the kitchen, the entertainment half of the center offers two pool tables and foosball, pingpong and poker tables. Video game “pods” with TVs sit in the open area, in addition to the four gaming stations in a separate room.

But the “focal point” is the music stage, Schmidt said. A professional-level music mixing system awaits anyone wanting to mix their own soundtracks, and electric guitars hang on the wall and a keyboard and drum set sit on the floor, ready for someone to play them.

The USO brings in bands and musicians to perform live during the weekly “no-dough” free dinners. In late April, the Southshore Soul Kings performed a set, and instead of charging the center a gig fee, the music group donated to the center, Schmidt said.

It was with a no-dough dinner that the USO welcomed service members and their families back to the center on April 2. They dined together on Real Urban Barbecue as they took in the transformed facility.

“The first reaction is a sense of amazement that this building exists in a historical building,” Schmidt said. “And then the diversity of offerings, from a place to read a book to a place to make music, there’s something for everyone.”