For second time in a week, Navy ship rescues sailors in distress off East Africa 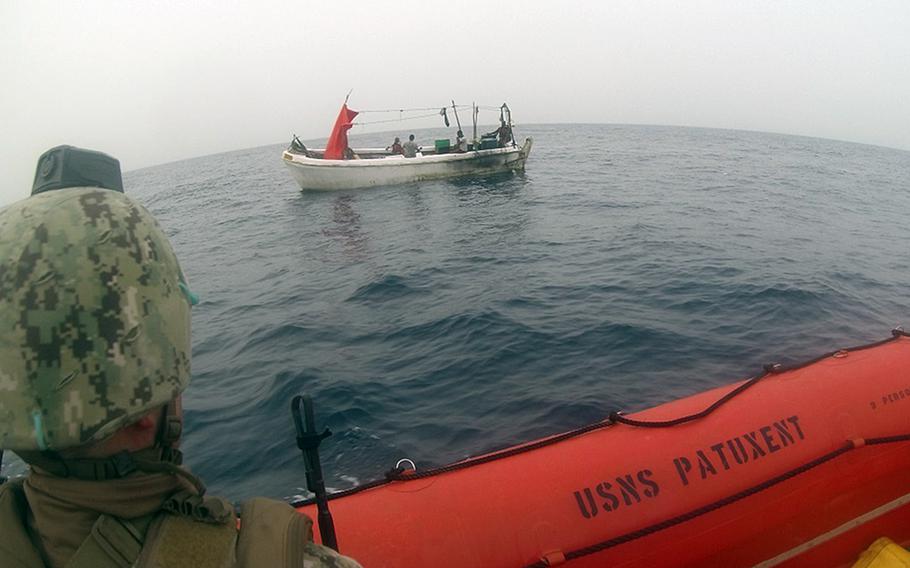 A U.S. Navy oiler this week rescued four Somali men who’d been stranded at sea for days off the Horn of Africa after their fishing boat had a mechanical failure.

Sailors of an embarked security intelligence team and merchant mariners of the Military Sealift Command’s USNS Patuxent, a Henry J. Kaiser-class underway replenishment oiler, rescued the men in the Gulf of Aden, the Bahrain-based 5th Fleet said in a statement Friday.

The Somalis’ small fishing vessel was flying the international distress flag after drifting for 12 days and was taking on water, the statement said. The crew had been without food and water for several days, the Navy said in captions on photos published online. They were given food, water and a medical screening once they were aboard the Patuxent.

It’s the second time in about a week that the oiler's crew has rescued stranded sailors in the Gulf of Aden. On June 9, the Patuxent steamed at maximum speed to aid the 15-member crew of the Falcon Line, a cargo ship registered in the African nation of Gabon that was taking on water, arriving before it completely sank. 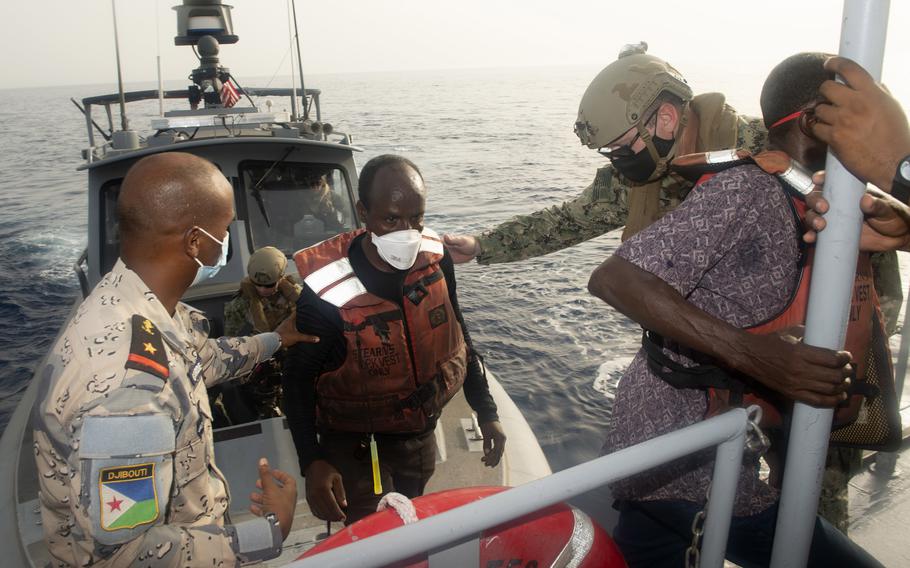 U.S. Coast Guard Cmdr. Benjamin Lehrfeld, right, Task Force 68.6 commander, and members of the Djibouti Coast Guard help four Somali fishermen switch boats, June 17, 2021. The fishermen were stranded at sea after a mechanical failure and were without food or water for several days before they were rescued in the Gulf of Aden, June 16, 2021. (Jacob Sippel/U.S. Navy) 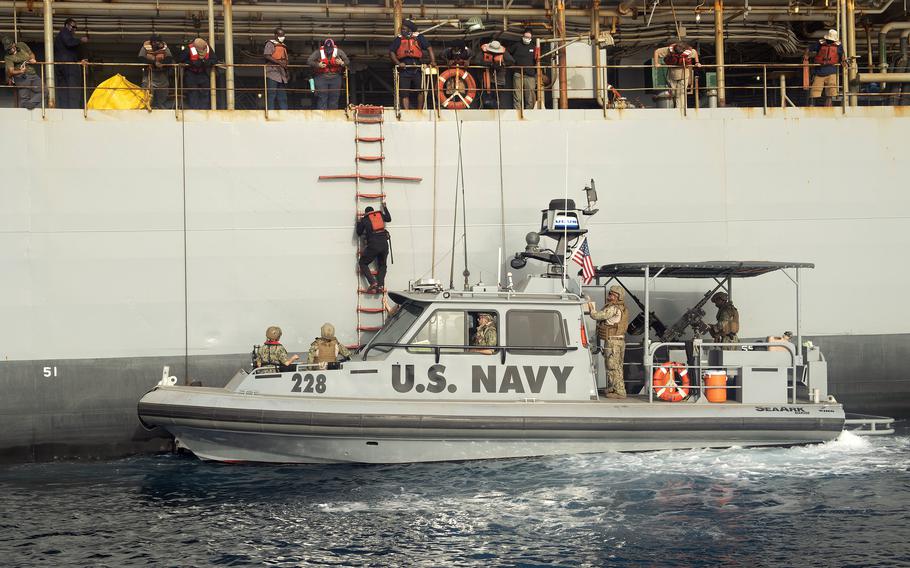 One of four Somali fishermen rescued by U.S. sailors in the Gulf of Aden, climbs down a ladder from USNS Patuxent to U.S. Navy Maritime Expeditionary Security Squadron Eleven Patrol Boat 228, based at Camp Lemonnier, Djibouti, June 17, 2021. The fishermen were stranded at sea after a mechanical failure and were without food or water for several days. (Jacob Sippel/U.S. Navy) 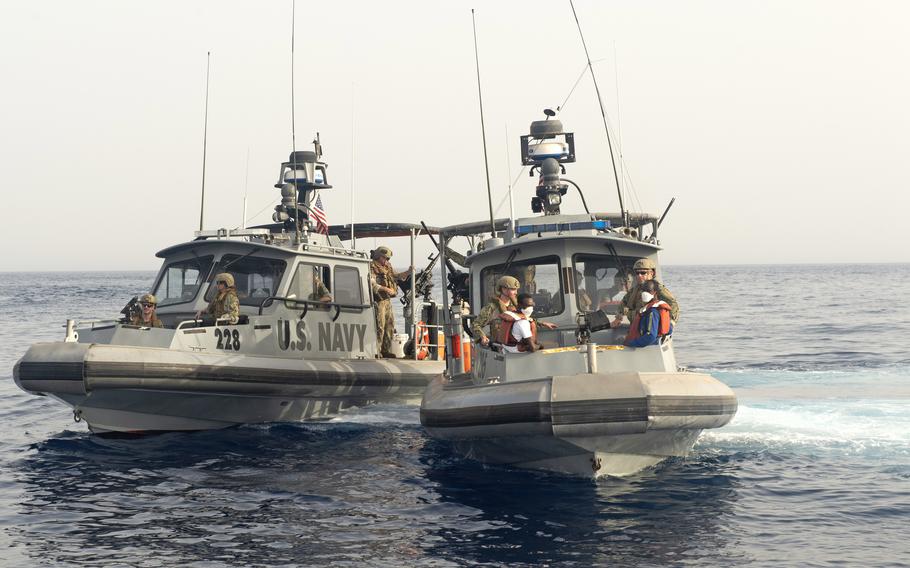 A U.S. Navy Maritime Expeditionary Security Squadron Eleven patrol boat based at Camp Lemonnier, Djibouti, pulls away from USNS Patuxent, not seen, with four Somali fishermen on board, on June 17, 2021. The fishermen were rescued by U.S. sailors a day earlier after being stranded at sea for 12 days. (Jacob Sippel/U.S. Navy) 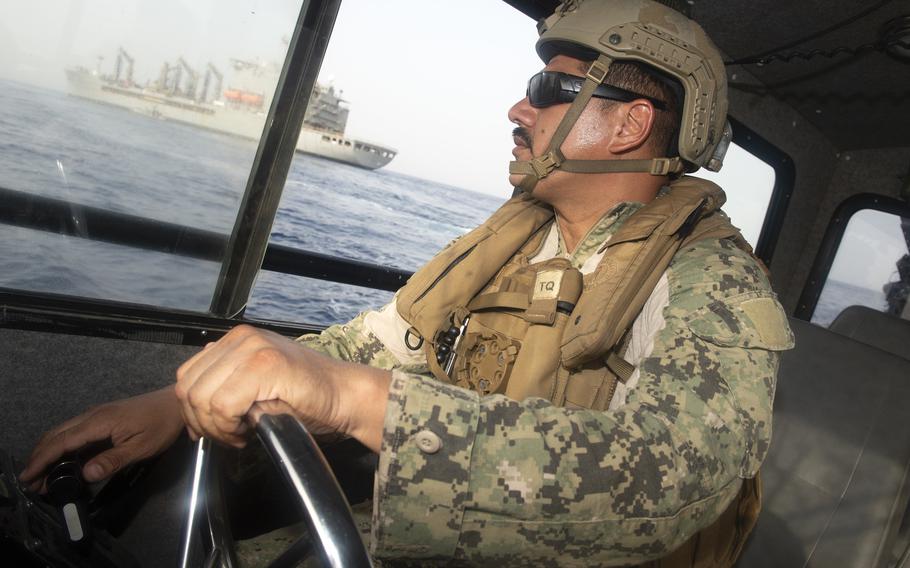 “I am extremely proud of them,” Navy Capt. Michael O’Driscoll, commander of Task Force 53, said of the oiler’s crew after the Somali fishermen were rescued Wednesday. “I think this perfectly highlights the value of a sustained maritime presence alongside our regional and coalition partners.”

The 1974 International Convention for the Safety of Life at Sea obligates all mariners to provide assistance to those in distress at sea, 5th Fleet said. While it wasn’t immediately clear how many rescues the fleet’s ships have conducted in recent years, the command reported at least two rescues in 2020 and another two in 2019.

The four Somali fishermen were transferred Thursday from the Patuxent to two boats from the U.S. Navy’s Camp Lemonnier, Djibouti-based Maritime Expeditionary Security Squadron Eleven, or MSRON-11, and then to the Djibouti coast guard patrol boat Damerjog, which took them back to shore in Djibouti City.

The Damerjog and MSRON-11 also took part in the rescue of the Falcon Line mariners.