ANNAPOLIS, Md. (Tribune News Service) — The U.S. Naval Academy paid more than $262,000 in early spring to put midshipmen up at two local hotels while the institution responded to a COVID-19 outbreak.

The Naval Academy sent approximately 200 midshipmen to the Graduate and the Hilton Garden Inn in March in order to free up additional quarantine and isolation space inside Bancroft Hall.

It cost the academy approximately $106,442 to house the midshipmen at the Hilton Garden Inn from March 1 to March 15 and $156,172.24 to house them at the Graduate from March 2 to March 25, according to receipts from the hotels obtained by The Capital through a Freedom of Information Act request.

Sending midshipmen to the hotels was just one of the measures used by the academy to mitigate the pandemic while having midshipmen on the Yard, which also included millions of dollars for tents, food preparation items and other housing.

Superintendent Vice Adm. Sean Buck told The Capital that he made the decision that leadership needed to be taught in person, which is why the brigade of midshipmen returned over the summer.

But to bring back the midshipmen, the Naval Academy needed to make adjustments.

First, there was the matter of making sure there was enough quarantine and isolation space in Bancroft Hall. This was done so the midshipmen would be close to medical personnel if they caught SARS-CoV-2, the virus that causes COVID-19.

In the fall, the Naval Academy leased dormitory space from neighboring St. John's College while the school stayed remote. The dormitories likely came with a price tag of more than $1 million, according to the contract between the Navy and St. Johns.

When St. John's students returned in the spring semester, the Naval Academy turned to families and sponsors. Approximately 200 midshipmen lived with sponsors, families or family friends who lived within 35 miles of the academy.

Then came the outbreak, which forced the academy to increase the quarantine and isolation space.

Leadership also needed to figure out how to feed midshipmen and how to convert classrooms into hybrid learning spaces so midshipmen could attend class even while they were at home or in quarantine or isolation.

The traditional family-style or buffet service usually done in King Hall would not provide the ability to social distance.

Instead, the dining hall switched to cafeteria-style. Midshipmen could eat with a few friends inside a tent located outside of King Hall.

The NAVSUP Fleet Logistics Center Norfolk rented a tent on behalf of the academy from Grand Rental Events for $1,407,661.50 for a 57-day base period and eight monthly options, according to the contract's description.

"This requirement is of unusual and compelling urgency," NAVSUP Fleet Logistics Center Norfolk wrote in the justification for a sole source contract. "In order to support the mission of USNA and support the dietary/nutritional requirements of the Brigade of Midshipmen while ensuring maintaining of recommended social distancing to protect against spread of COVID-19, USNA will require additional space to provide meals."

In seeking a vendor for the tent, NAVSUP Fleet Logistics Center Norfolk and the academy included a picture of the space behind King Hall for the tent. The agencies also included a FAQ sheet about the needs for the tent, including chairs and tables for 800-1,000 midshipmen.

In order to maintain social distancing, midshipmen would be spread out among two tents, which would hold up to 500 midshipmen. The tables would need to be able to hold between six to eight mids, according to the FAQ sheet.

The academy and NAVSUP Fleet Logistics Center Norfolk also sought vendors who could provide styrofoam food containers and cutlery for grab-and-go meals. The price tags for the items were redacted.

The Naval Academy also needed new combi ovens, which are appliances that can both use steam or convection to cook, in order to shift from the typical dining service, according to the justification for sole source document included with the solicitation for vendors.

The combi ovens replaced non-functional ones. At the time of the request, six of the academy's 12 ovens were not operational, according to the document. The shift to grab-and-go meals meant the academy's dining staff needed the additional ovens, which helped the staff cook the food faster.

Before the new combi ovens, King Hall staff cooked meals earlier and put them in warming carts, causing the food to be "overcooked, dried out and not appetizing resulting in numerous complaints," according to the document.

Outside of the challenges to living on the Yard, the academy also faced technical difficulties due to the pandemic shifting classes fully online in the second half of the spring 2020 semester and partially online in the 2020-2021 academic year.

In December 2020, the Naval Academy solicited vendors to provide a number of additional cameras and tripods to help with hybrid and remote learning, according to a sole source justification document.

The cameras were estimated to cost $266,670 and would be purchased from B&H Photo, according to the document.

All critical COVID-19 impacts on the academy's budget were reimbursed by the Navy, Cmdr. Alana Garas, spokesperson for the academy, said in an email. There were no delays to future projects because of the pandemic costs. 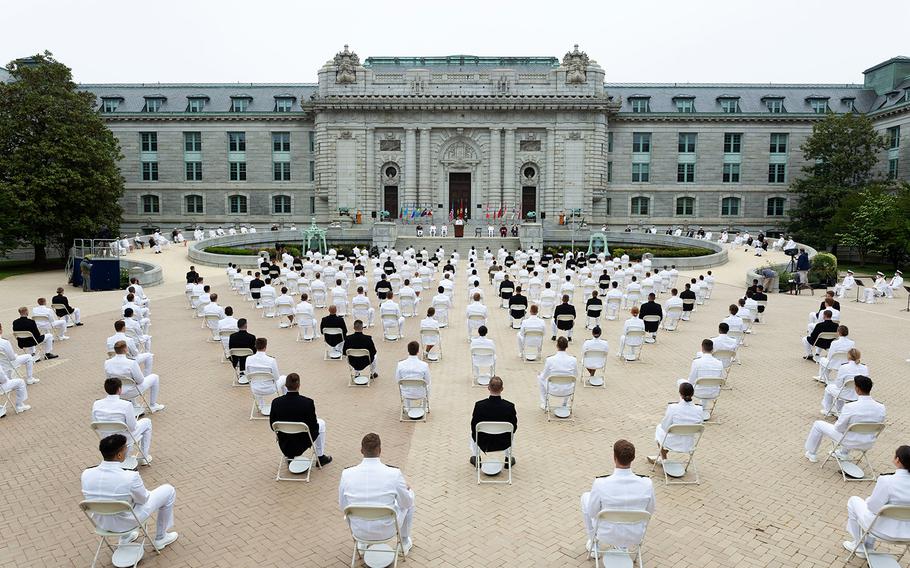 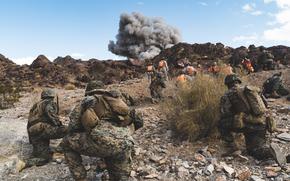