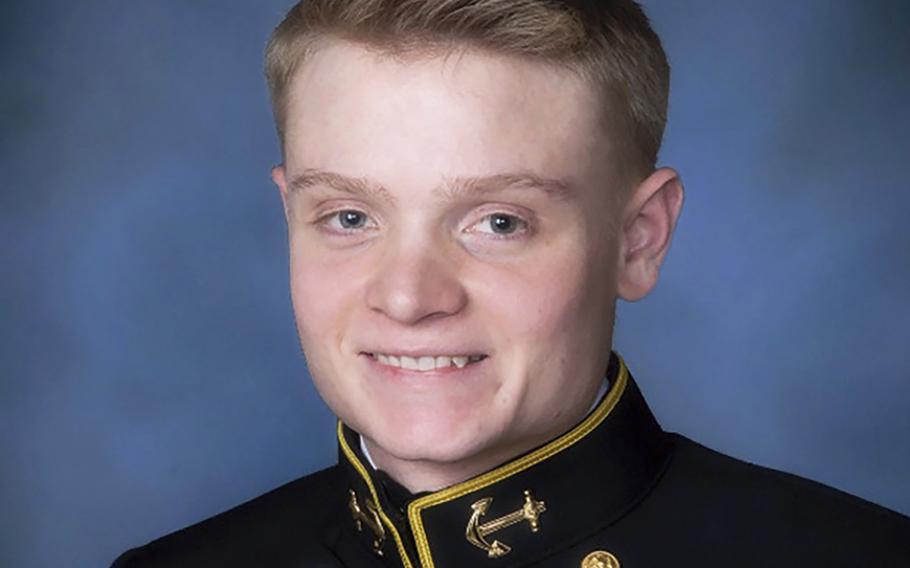 It was a family tradition that Benjamin and Sheila Watson began before they had three sons.

"All three of our boys grew up here on the lake. They learned how to swim and fish here," Benjamin Watson Jr. said. "Coming to the lake several times each summer has been a staple of the Watson household ever since they were born."

Josh Watson's last visit to the lake house came right after he graduated from the Naval Academy in May 2019. The family celebrated the youngest son's 23rd birthday in addition to his commissioning as an officer.

Six months later, Joshua Watson was dead — killed during a shooting at Naval Air Station Pensacola on Dec. 6, 2019. The Naval Academy graduate from Enterprise, Alabama, had just reported to Pensacola two weeks prior to begin training as a Navy pilot.

"This is our second Memorial Day without Josh, and there is such a big chunk missing from our family," Sheila Watson said.

Benjamin Watson said not having their youngest son at Lake Guntersville for the dual Memorial Day and birthday celebration "reopens the wound" the family absorbed that dark day.

"Had he not been murdered, I'm sure Josh would be here with us today — sitting on the deck watching the lake or down on the pier fishing with his brothers or fixing s'mores for his niece and nephews. We were robbed of all those opportunities," he said.

Benjamin and Sheila Watson cannot attend because their son is being honored during a Memorial Day ceremony in their hometown of Enterprise. They plan to watch a replay of the Dulaney Valley event, which begins at 10 a.m. and is being live-streamed.

Representing the family at Dulaney Valley Memorial Gardens will be Navy rifle head coach Mike Anti and assistant Lou MacKenzie. Josh Watson was a four-year member of the academy's rifle team, serving as captain as a senior.

MacKenzie described Watson as a "mediocre shooter" upon arrival in Annapolis, but he developed into one of Navy's top performers in the smallbore discipline, which involves firing a .22-caliber rifle at 50 feet.

"I could always count on Josh to put up a good score in smallbore," Anti said. "Josh improved as a shooter through commitment and hard work. He was always the first to practice and the last to leave. He led by example by practicing harder than anyone else."

Anti was hired as head coach when Watson was a junior and set a goal of beating archrival Army and qualifying for the NCAA Championship, accomplishments that had eluded Navy. The Midshipmen fell short of both goals during the 2017-2018 season.

"That lit a fire under Josh. He was determined it was not going to happen again his senior year," Anti said.

Watson posted the highest score in smallbore as Navy captured the Star Match for the first time in a decade by beating Army on Feb. 2, 2019. Afterward, Zanti said, Watson "did a great job all season of keeping the team focused on the mission."

Navy wound up qualifying for the 2019 NCAA Championship and finished seventh. The Mids ended an eight-year absence from nationals, and Anti credited Watson's leadership, particularly the way he took the underclassmen under his wing.

"When Josh gets a mission in his mind, he won't stop until it's accomplished. He was just a very driven individual and really took charge of the team as the senior captain," Anti said. "Josh was the type of person who led from the front, but not in a controlling way. He was always very positive, very encouraging and took pride in setting his teammates up for success."

Anti previously spent eight years as an assistant at the Air Force Academy, but Watson was the first of his former competitors to be killed in the line of duty. He and three Navy rifle team members were in Colorado Springs competing at the Winter Air Gun Championships at the United States Olympic Training Center when it happened.

Torrance Kang, a Howard High product who was a junior at the time, had been receiving text messages about the Naval Air Station Pensacola mass shooting.

"I went down to the hotel lobby to get breakfast and Torrance said: 'I think Josh just got killed,' " Anti said. "It hit us all like a ton of bricks. We were hoping these were rumors or perhaps Josh had been shot and was in the hospital. It was a couple hours later when we got the word that Josh had passed."

Watson was the "officer on deck" of Building 633, which contained numerous classrooms and an auditorium large enough for almost 400 flight students to attend morning muster (roll call). He had come on duty at 11 p.m. and was scheduled to be relieved at 7 a.m.

Watson was sitting in the main control center at the front of the building when the shooting rampage began at 6:39 a.m. Mohammed Saeed Al-Shamrani, a second lieutenant in the Royal Saudi Air Force who was participating in a training program sponsored by the Pentagon, stepped into the control center and shot Cameron Walters, then Watson.

After shooting more personnel in an office down the hallway, Al-Shamrani returned to the front and shot Watson again after seeing him climbing over a counter into the hallway.

Watson was able to get up again and had almost made it out the door when Al-Shamrani returned a third time and shot him in the spleen. Benjamin Watson was later told that was the worst of the six gunshot wounds his son received.

Somehow, Watson was able to make it out of the building and give valuable information to first responders. He told Navy police officers the height, nationality and uniform of the shooter and that he had a mustache and was using a pistol.

"Hundreds of lives were saved that day because of Josh's effort," Benjamin Watson said. "This terrorist's hope of inflicting a major blow to Navy aviation and the morale of the base was thwarted because one man had the strength to get off the floor and crawl over the counter."

Josh Watson was hoping to fly the F/A-18 Hornet combat jet and was only a few weeks away from beginning his training. Working security at Building 633 was only a part-time post and Dec. 6 would have been Watson's last.

Watson was inspired to pursue a military career by his uncle, Richard Lindsay, a former Marine Corps soldier who served in Operation Desert Storm.

"Josh talked about being a soldier from the time he was 5 years old. His goal was to be the best of the best and take the fight to the enemy, wherever that might be," Benjamin Watson said.

Benjamin and Sheila Watson did not see Josh much for five years as he attended the Naval Academy Prep School in Newport, Rhode Island, for a year before spending the next four years in Annapolis. They were happy he would be training in Pensacola for two or three years because it was only a two-hour drive from their home.

They think of the many life milestones that will not happen — Josh graduating from flight school, getting married, having children.

"Josh encouraged my wife to take care of herself. He bought her an exercise bike for Christmas and would call and say, 'Mom, I need you to ride that bike because I want you to help take care of my kids one day.' We'll never get a chance to do that," Benjamin said.

Al-Shamrani discharged his weapon more than 100 times during the attack, killing three sailors and severely injuring eight others. The Department of Justice and FBI labeled the incident an "act of terrorism" motivated by "jihadist ideology" after discovering Al-Shamrani communicated with al-Qaida operatives in the months leading up to the attack.

The Watsons and families of other victims have called for more thorough vetting of Saudi nationals participating in the Pentagon-sponsored training program as part of a security cooperation with Saudi Arabia.

"What makes it so hard to swallow is that Kaleb was willing to give his life for his country," Benjamin Watson said. "We always knew it might come to that. We just thought it would be on some faraway battlefield, not on our home soil and at the hands of someone from a country that says they're our friends and allies."

In late February of this year, the families of the three U.S. service members slain in the attack filed a 152-page complaint in a Pensacola federal court, alleging the Saudi government facilitated the attack.

The lawsuit seeks damages for an attack the families say was caused by Saudi Arabia and its willful or grossly negligent acts in sending a "Trojan Horse" terrorist operative into a U.S. program to train pilots flying warplanes that were part of U.S. arms sales worth billions of dollars.

The families also accused the Trump administration and the Saudi government of reneging on pledges of support for families.

"In the eyes of the American people, there is no greater betrayal than the realization that a purported ally is, in fact, an enemy," the lawsuit asserts.

Benjamin and Sheila Watson are also critical of a Pentagon policy that prohibits service personnel from carrying firearms on United States military bases. Josh Watson was an expert marksman with both a long gun and a pistol but was not allowed to possess either while serving watch duty in Building 633.

Sheila Watson made that point to Alabama Sen. Richard Shelby when he called to offer condolences to the family. As Officer on Deck, Josh Watson was charged with providing basic security for Building 633, but without being armed was "just a well-dressed hall monitor," she said.

"Had my son been armed, everything would have been different that day," Benjamin Watson said. "I believe Josh would have stepped into the hallway and neutralized the shooter."

The Navy varsity rifle program has established the Josh Watson Memorial Trophy, awarded to the Most Valuable Performer during the annual Star Match against Army. The Naval Academy Prep School renamed its rifle range in honor of Watson.

A Veterans Affairs retirement home being built in Enterprise, Alabama, will bear Watson's name. There are also several scholarships awarded in Enterprise that honor Watson, who is buried at Alabama National Cemetery in Montevallo.

"We've been contacted by folks across the country wanting to honor Josh in some way or another," Benjamin Watson said. "We are very grateful that folks are choosing to remember an American hero."

MacKenzie has been an assistant with the Navy rifle program for eight years, and Watson remains his all-time favorite athlete. They bonded immediately when Watson visited the Naval Academy while at the prep school. Watson's father graduated from Jacksonville State University in Alabama, while MacKenzie's son did as well after competing for the school's rifle team.

Watson attended the annual Labor Day cookout at the MacKenzies' home in Centerville and loved fishing for stripers on the Chesapeake Bay aboard the assistant coach's boat. They became so close that Josh called Lou "pop" and made sure to call him on Father's Day.

"Josh was all about becoming the best he could be. He was a wonderful young man who knew how to achieve his goals," MacKenzie said. "Losing Josh is something I'll never get over. I really miss my little buddy."