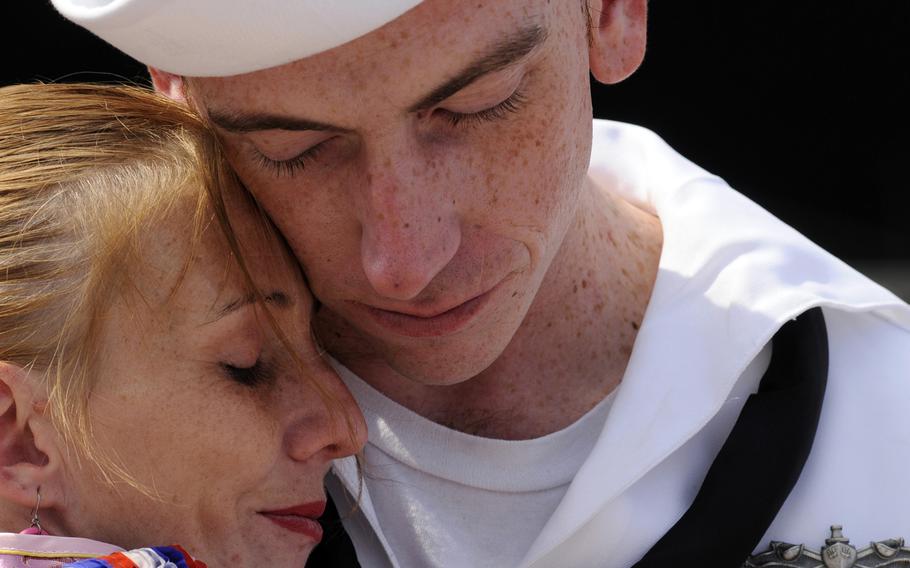 It is routine for people to gather pier side when ships return from long deployments, both to welcome sailors back and help families transition. (U.S. Navy)

The Navy is assessing how best to employ specially trained teams placed aboard large ships as they head to sea to help sailors with shore-to-sea transition, a program tested earlier this year.

The “proof of concept” for the Departure and Separation Program kicked off in December on six cruisers and destroyers from Norfolk, Va., and ended in mid-February. Their crews were dealing with the usual stressors of heading to sea for many months but also with family issues and restrictions related to COVID-19, the coronavirus respiratory disease.

“I would say some of [the program’s launch] was directly attributed to COVID,” Edward Cannon, director of Fleet and Family Readiness Programs for Navy Installations Command, told Stars and Stripes during a recent phone interview.

“So, I don't see it as something that we would be rolling out enterprise-wide on every ship, every time that they deploy,” he said. “But we absolutely know there are going to be times when there are additional stressors or changes to pace or schedule that would lend itself well to this model, and we are prepared to support that as it comes up.

“Basically, we’ve done the proof of concept, and we know that other ship commanders need this type of support. Our team will be ready to do that no matter what type of ships they are.”

Beginning Dec. 28, the program sent two-person teams — a licensed counselor and specially trained educator, in most cases — to ships during their initial two to six weeks of restricted movement and then at sea. Restriction of movement is the term the Navy gives to a two-week quarantine required of a crew before they ship out. 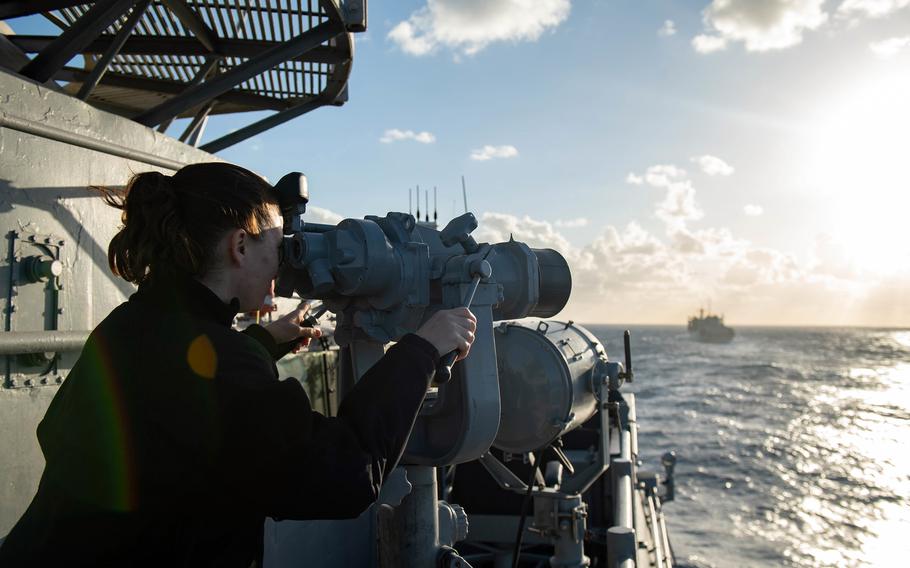 A sailor aboard the guided-missile cruiser USS Monterey looks out at the Mediterranean Sea, March 17, 2021. (Chelsea Palmer/U.S. Navy)

Aside from offering formal presentations, the teams spent much of their time just mixing with the crews during walkabouts.

The program’s rollout had been planned for January but was stepped up after Fleet and Family Support “received an urgent request for emotional aid” from leaders aboard the guided-missile cruisers USS Monterey and USS Vella Gulf and the destroyers USS Mitscher, USS Mahan, USS Jason Dunham and USS Laboon, the Navy said.

The command triads — commanders, executive officers and command chiefs — aboard the ships had observed sailors grappling with “elevated stress due to the pandemic, loss of shipmates, pressures of pre-deployment work-ups, operational tempo and restriction of movement” requirements, the Navy said.

Cannon oversees quality-of-life programs for sailors and their families, and it is routine for personnel to gather pier side when ships return from long deployments — both to welcome sailors back and help families transition.

The Departure and Separation Program essentially took that reunion effort and “turned it on its head,” Cannon said. “What about before they return? How can we take care of them?

“So, when we got this call to support Naval Surface Force Atlantic, it was really a matter of asking our teams throughout the Mid-Atlantic if they were interested in taking that skill set and quickly forming part of a team that would then go out and embark with the ships,” he said.

It meant cutting short holiday time normally spent with friends and family because team members had to join the required two-week restriction of movement that began only a few days after Christmas.

Laboon Cmdr. Charles Spivey described the program as “invaluable” in the Navy news release, saying “the curriculum gave our crew new skills and appropriate resources to be successful while we are gone.”

Cannon said the data is not yet available to see how effective the teams were in easing problems due to separation. But he said he was convinced that the roughly 1,800 sailors on the six ships benefited from the teams’ presence.

Direct feedback from the command triads and sailors on each ship was encouraging, Cannon said.

“What we heard was that there were demonstrated positive outcomes to operational readiness,” he said.

“So, a healthier ship overall and one that was — by definition of the commanding officers — better able to do their jobs,” he said. “From the triads we heard a definite interest in repeating this. We’ll be looking at providing it again.”