Sailors who have been fully vaccinated against COVID-19 can now make some port calls, often go mask-free and deploy without quarantining beforehand, the Navy has announced.

“With more than a year operating in the COVID environment, we have gained significant expertise in mitigating and preventing the spread of COVID-19,” Vice Adm. Phillip Sawyer, deputy chief of naval operations for operations, plans and strategy, said in a statement. “Now with vaccines and CDC scientific data, we are able to relax many of the procedures we put in place and still provide for the health protection of the force.”

The rules apply to personnel on ships, submarines and aircraft, Sawyer wrote in a servicewide message issued Monday. Fully vaccinated personnel will be allowed port calls in designated “safe haven” ports, including in Guam, Bahrain, Japan and Spain, and use on-base gyms, commissaries and other services.

They can also go mask-free and stop social distancing in most situations. Masks will still be required for medical and dental care providers when treating patients, on public transportation and for those joining a crew underway, regardless of immunization status.

Sailors diagnosed with COVID-19 in the past three months who have antibodies also will be able to skip the 14-day quarantine before deployments, the message stated. 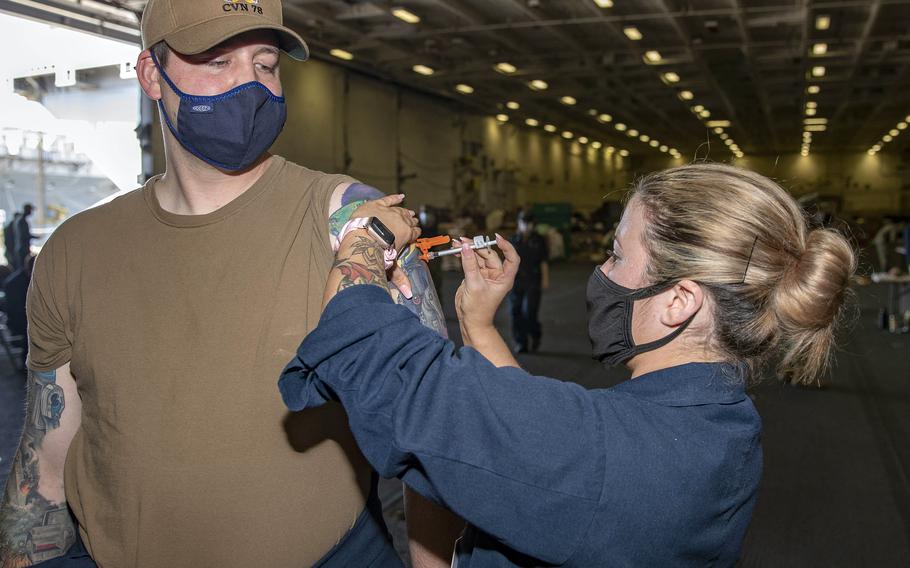 Unvaccinated sailors who don’t have antibodies for COVID-19 will still be required to comply with previous quarantine and testing protocols.

The pandemic was particularly disruptive on ships and submarines, where social distancing in tight quarters is all but impossible. Crews had been required to board ships early for quarantine ahead of deployments, adding two more weeks to time away.

Once deployed, ships avoided most port calls. Some stayed at sea for 10 months.

That followed the mass infection of some 1,200 sailors, including one who died, on the aircraft carrier USS Theodore Roosevelt in March 2020.

The Navy is now seeing the military’s highest vaccination rate and the lowest number of COVID-19 cases, Sawyer wrote. More than 230,000 Navy and Marine Corps personnel have been fully immunized, he said.

“We must continue to pursue full vaccination and apply best health protection measures both at home and at work to sustain and improve upon this performance,” Sawyer said.

Marines, who routinely deploy on Navy ships, have been less willing than sailors to get vaccinated. Nearly 40% of the 123,000 Marines who had the chance to receive the vaccine by April had declined it, USA Today reported, citing Pentagon figures.

None of the fully immunized sailors and Marines have been hospitalized to date for COVID-19, the Navy said, highlighting the operational importance of widespread vaccination.

“The science is pretty clear, vaccinations are key to best protecting our sailors,” Sawyer said. “The more sailors that are vaccinated, the better for them, their families, the Navy and the nation.”