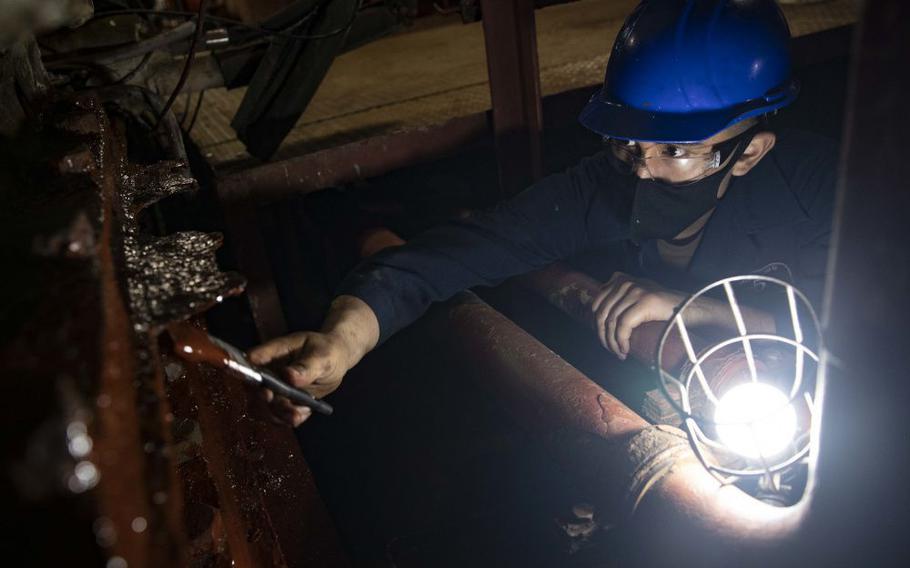 NEWPORT NEWS, Va. (Tribune News Service) — Sailors enlist to be at sea, says Capt. Brian Carmichael, commander of USS Bataan ― but the mostly first-time seafarers he led on deployment last year didn’t necessarily expect to do so for 155 straight days when the pandemic erupted.

A core group of that now-seasoned crew is leading another set of new sailors through what Carmichael thinks is one of the toughest challenges on a warship — from shipyard to heading out to sea.

“Sailors don’t sign up to join a ship in the shipyard, they sign up to be on a ship at sea,” he said.

Bataan is nearing the end of a months-long stint at the General Dynamics NASSCO shipyard. Carmichael, who led the crew through the last shipyard-to-deployment cycle in 2019, likes what he sees as he watches how those experienced sailors work with new arrivals.

Those stories make the chores of life in the shipyard seem less arduous by pointing how sailors’ work now makes their work later go better.

“For some of our sailors, they’ve never worked as hard before,” Carmichael said “I always say to be best, you’ve got to do it on the deck-plate. Hard work now, instead of just doing the minimum, means everything is easier later.”

Carmichael’s been on 12 deployments in his 36-year Navy career, during which he worked his way up in just 10 years to become a chief petty officer before he was tapped for a commission.

The last deployment was challenging.

Bataan set out from Norfolk a few weeks before COVID-19 became news. Most of the crew was on its first deployment after joining a ship that was finishing some 18 months in the shipyard.

Carmichael had led crew members through “the usual crawl-walk-run,” of learning their jobs on the ship, learning how to operate in a amphibious strike group, practicing the challenges of landing Marines on hostile shores — and getting them off safely to head home when the mission is complete.

“They were ready ... after all that, deployment’s really the fun part,” he said.

But by March of last year, and their first two port calls in Europe and Bahrain, things weren’t quite as much fun. The Bataan was considered a bubble — because it had left home, and then Bahrain before COVID hit, there was no risk of exposure as long as the ship didn’t stop elsewhere.

The crew didn’t need to wear masks, as other sailors deploying from Norfolk or Little Creek later that year did. They did have to step up cleaning.

The four at-sea replenishment of supplies — when two ships sail side by side while cargo is swung over from one to the other — had to be handled with an eye for possible infection. Sailors who joined the ship during deployment, including Master Chief Isbell, had to be quarantined.

“I was caught up in COVID, moving my family from Memphis to Norfolk, trying to figure out how to get out to Bataan,” Isbell said.

Since the Navy’s usual practice of dispatching family and fleet support specialists to a deployed ship’s final port call to conduct “return and reunion” sessions wasn’t possible, that was a chore Isbell took on.

“For sailors, it can feel like coming back the day after you left, But you leave in December and come back in July and things have changed, the kids have grown ... you have to think about reintegrating with family life,” he said.

The long run at sea also meant tasks that deployed ships’ crews haven’t had to do in years — like the time Bataan anchored off the United Arab Emirates so sailors could climb up its masts to makerepairs usually handled by contractors in port.

Taking on tasks that sailors don’t usually do meant more work — but it had a payoff, too, he said.

“I think it meant sailors had more of a sense of our ship and what goes into it,” Carmichael said. “I think they had a better sense of our mission ...

“We had to be self-reliant. We were resilient.”