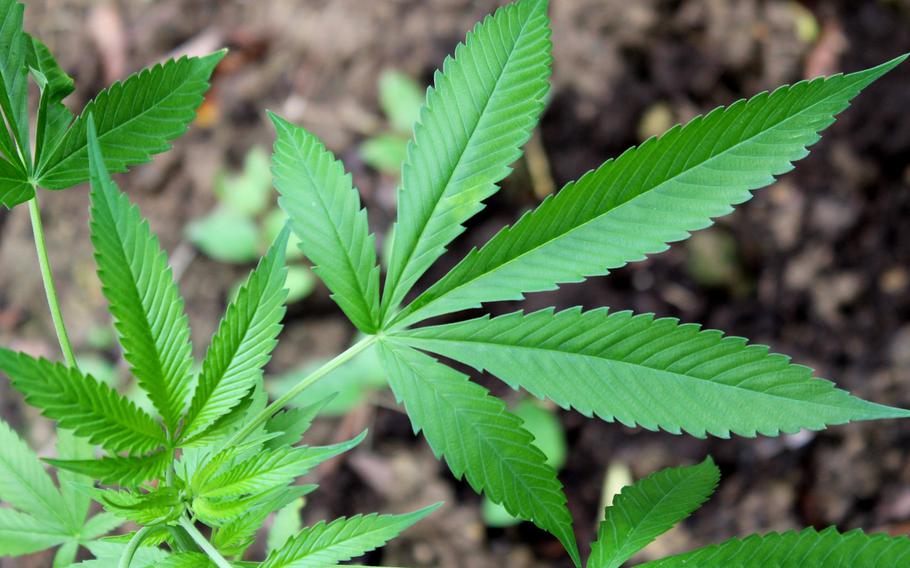 A marijuana plant found during a patrol in Georgia by the state's Army National Guard in 2013. The Department of the Navy has banned sailors and Marines from using shampoos and other products containing hemp. (U.S. Army)

The Navy has banned sailors and Marines from using shampoos, lotions and soaps made with hemp or cannabidiol, one of the main active compounds in cannabis plants, it said in a statement.

At issue is the possibility that such products could contain too much of the psychoactive compound found in pot called tetrahydrocannabinol, or THC, and their use could “negatively impact mission readiness and disqualify a sailor from continued service,” said the statement released Friday.

The Navy banned the use of topical products made with hemp or its derivatives in a July 24 administrative message, saying it’s impossible for consumers to determine how much THC such products contain based on label claims that may be untrustworthy. The policy warns that the use of hemp-based or products containing cannabidiol, or CBD, risks interference with the department’s drug testing program.

The policy’s goal is to prevent service members from unknowingly consuming THC in any amount, the Navy said last week.

The new rule follows a ban imposed last summer by the Navy on the ingestion of products containing hemp or hemp derivatives without a valid prescription, after a 2018 farm bill removed low-THC hemp from the Controlled Substances Act.

Many health and beauty products now contain hemp seed oils or other derivatives, and their manufacturers boast of their ability to hydrate skin, heal damaged hair, battle acne and more — without getting users high.

The Army, Air Force and Coast Guard already have policies in place that forbid military members from using products made with hemp or hemp seed oil. The Navy’s previous policy only banned the ingestion of hemp-derived products or use of others, such a transdermal patches, that are designed to put CBD into the bloodstream.

The new rule still allows for the use of CBD-containing products that have been approved by the Food and Drug Administration, if a service member has a valid prescription. The rules do not prohibit the use of “durable hemp goods” such as rope, twine or clothing.

Sailors who test positive for THC or other substances without a prescription will be processed for administrative separation, and could receive an “other than honorable” discharge, the Navy said. That could affect their eligibility for veterans’ benefits and employment opportunities.

“We have to be fit to fight and can’t take a risk in allowing our sailors to consume or use these types of products,” said L.A. Parker, head of the drug detection and deterrence branch of the 21st Century Sailor office.