New aircraft to be stationed at Marine Corps Base Hawaii 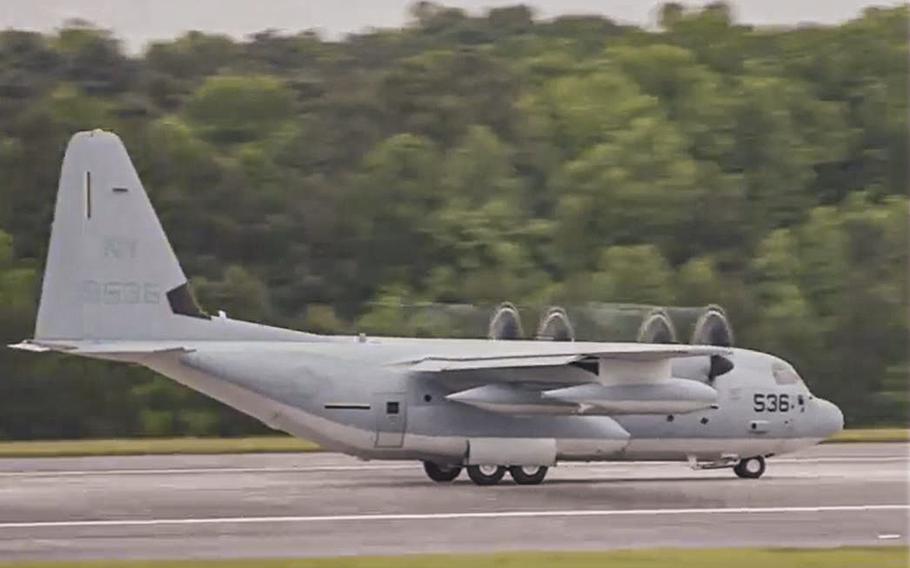 (Tribune News Service) — New KC-130J refueling aircraft are expected to begin operations in 2023 with a total of 15 ultimately arriving by the 2026 fiscal year.

The Marine Corps is moving forward with a plan to station new aircraft at its base in Kaneohe.

New KC-130J refueling aircraft are expected to begin operations in 2023 with a total of 15 ultimately arriving by the 2026 fiscal year. Two MQ-9 Reaper drones are also expected to arrive in 2023, replacing the smaller RQ-21 surveillance drones that have flown out of the base for the past four years. The Corps ultimately plans to have six MQ-9s in Kaneohe by fiscal year 2025.

The plan has been scrutinized by community members with questions about how the new aircraft would change the area. The National Environmental Policy Act required the Marine Corps to conduct an environmental assessment, which included consulting with the local community and government agencies to evaluate potential impacts on the environment and neighboring communities.

“During these engagements, and in studying public comments submitted by the local community, it became clear that community concerns centered largely on potential noise and historic property impacts, “ the Marine Corps said in a Tuesday news release.

The original plan called for the demolition of hangars that were attacked during the Dec. 7, 1941, attack by the Japanese navy on Oahu—drawing criticism from historians and preservation groups. The Kailua Neighborhood Board’s Planning, Zoning and Environment Committee also raised concerns about impacts to historic sites and asserted that the Marines had provided insufficient data on environmental impacts and potential noise from the new aircraft.

In a two-page motion with bullet-pointed concerns about the assessment, the committee called upon the Marine Corps to craft a formal environmental impact statement, arguing that “the proposed project is a major federal action, which will significantly affect the quality of the natural and human environment and therefore requires the preparation of an EIS under NEPA.”

Negative feedback to the Corps’ environmental assessment prompted the Marines to extend in September.

In its news release, the Marine Corps said it has since issued a Finding of No Significant Impact, or FONSI, upon deciding the plan does not require a formal EIS. Kailua Neighborhood Board Chair Bill Hicks told the Honolulu Star-Advertiser that he had heard nothing from the Marine Corps since the board submitted its concerns to Marine Corps Base Hawaii and Naval Facilities and Engineering Systems Command Pacific in September and was unaware of the Marines submitting a FONSI and moving forward.

In the news release the Marine Corps said its analysis concluded that the new aircraft would not produce an average noise level above 65 decibels, which is “the federally recognized standard of significance, “ and that in response to public feedback, it “expanded the analysis in the Draft EA by providing additional data on the noise impact on 22 off-base locations. This analysis confirmed that no location would exceed the ‘significant’ noise threshold of 65 dB DNL.”

The Marine Corps also signed a memorandum of agreement with the Advisory Council on Historic Preservation that contains several measures to mitigate the impact on historic sites.

“A new Type 2 hangar will be built to replace Hangar 103 in order to provide a modern facility, capable of meeting the needs of modern aircraft, “ the Corps said in its news release. “Despite being new, the design of this hangar will incorporate historic design elements consistent with those found on hangars built here during World War II.”

Meanwhile, the Reaper drones will be stored in the base’s historic Hangar 102. The drones will fly at high altitudes and are by design quiet and stealthy.

The Marine Corps has taken steps to remove all of its conventional helicopters—which have long been a source of noise complaints—from Hawaii. The move opened up space for the new aircraft as the Marines double down on the use of their tilt-rotor MV-22 Ospreys, which can fly faster and farther. In September, Kaneohe-based Marines who had been training in Australia made a 6, 100-mile island-hopping flight back to Oahu with the help of refueling aircraft.

“The KC-130J squadron provides the Marine Corps with increased aerial refueling and transport capabilities in the Pacific, including the ability to rapidly move Hawaii-based Marines throughout the vast region, “ the Marines said in their news release. “The MQ-9 provides the Marine Corps with improved situational awareness about the operating environment, which aids decision-making and rapid response to crisis or contingency. The importance of these capabilities to the Marine Corps, the Joint Force, and like-minded allies and partners in the Indo-Pacific region cannot be overstated.”

The Marine Corps is in the midst of restructuring its forces with a focus on island and coastal operations amid boiling tensions in the South China Sea, a busy waterway through which one-third of all international trade travels. The Chinese military has built bases on disputed islands and reefs over the objections of neighboring countries and has been stepping up its operations around Taiwan, the self-ruled island that Beijing considers a rogue province and has vowed to bring under its control.

Some local activists have voiced opposition to the U.S. military’s increasing focus on the Pacific, and the arrival of drones in particular has attracted the ire of several. During a by the Marine Corps and Air Force using MQ-9s in Hawaii, activists demonstrated outside the Marines’ Kaneohe base with signs that read “No Reapers !” and “Drones Kill Kids.”

During the chaotic evacuation of civilians from Afghanistan in August 2021, a Reaper drone struck what military officials initially said was an ISIS bombmaker, only for the Pentagon to later acknowledge the strike killed no terrorists, but 10 civilians—including seven children.

Drones became both an iconic and controversial symbol of U.S. military strategy during post-9 /11 wars and anti-terror operations in the Middle East, South Asia, Africa and the Philippines. They were extensively used in secretive anti-terror operations by the military and CIA, including controversial targeted-killing missions. The Reaper is the successor to the MQ-1 Predator, which was originally designed just as a scout drone but was later retrofitted to fire Hellfire missiles to conduct those missions.

The Reaper was the first U.S. military drone specifically designed. But the Marines say they don’t plan to arm their drones in Hawaii—at least not for now. During the 2021 Hawaii drone exercise, the Marine Corps released a statement to reporters that “our current operational vision for the MQ-9 here in Hawaii does not call for arming Marine Corps MQ-9s at this time, but rather using them for surveillance and reconnaissance.”