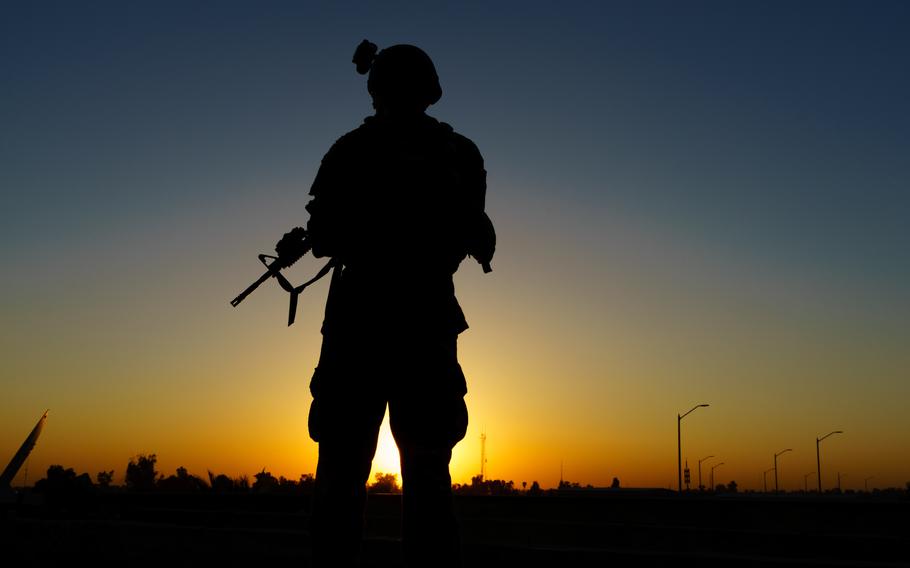 A service member overlooks the sunset during pre-combat checks and inspections in Iraq on Aug. 3, 2020. U.S. forces are deployed in support of Operation Inherent Resolve working with partner forces to defeat the Islamic State in designated areas of Iraq and Syria while establishing conditions for operations to increase regional stability. (Gregory T. Summers/U.S. Army)

WASHINGTON — A Marine died in Iraq this week as part of Operation Inherent Resolve, the Defense Department announced Thursday.

Staff Sgt. Samuel D. Lecce was supporting the operation when he died from a non-combat related incident on Monday, defense officials said.

Lecce, 32, was from eastern Tennessee, near Knoxville, the department said. He was based at Camp Lejeune, N.C., as part of the 3rd Marine Raider Battalion of the Marine Forces Special Operations Command.

“This incident is under investigation,” the department said in a statement.

Operation Inherent Resolve was established in 2014 to fight the Islamic State in Iraq and Syria.

There have been 109 deaths involving U.S. troops and Defense Department civilian workers in Operation Inherent Resolve, according to Pentagon statistics issued this week. It wasn’t immediately clear Thursday whether Lecce’s death was part of that count.