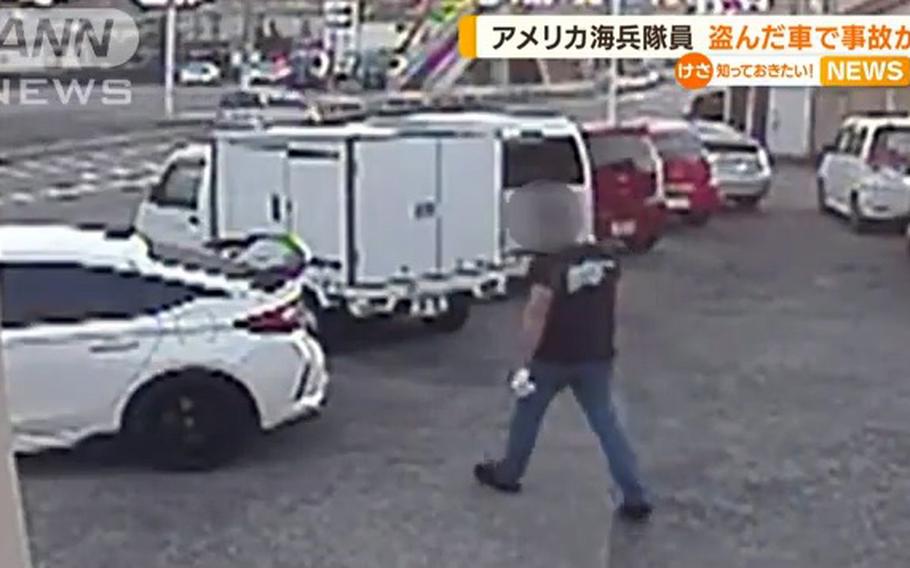 This screenshot from an All Nippon News report shows security camera footage from a car dealer in Iwakuni, Japan, Dec. 3, 2022. (ANN)

MARINE CORPS AIR STATION IWAKUNI, Japan – Japanese police suspect a Marine of stealing a car from a local dealer and crashing it into another vehicle at an Iwakuni city intersection.

The Marine, whom neither local authorities nor the Marine Corps identified Tuesday, is in custody, according to a news release posted Monday on the city’s website. It did not state where the Marine is being held.

The city provided only vague details in the release. The Marine stole the car Dec. 3, and the crash occurred the same day at an intersection in the Asahi machi section of Iwakuni, according to the release.

A local TV news report Tuesday by Yamaguchi Broadcasting Co. included security camera footage of a man kicking and then opening a local dealership’s door around 6:40 a.m. followed by a white sports car driving away.

The Marine fled the crash scene without providing first aid or calling authorities, according to the city’s release. It did not provide injury details.

Japanese government spokespeople typically speak to the media on condition of anonymity.

A spokesman for Iwakuni police said by phone Tuesday that the incident is under investigation and declined to provide further information.

A Marine spokesman said the air station is cooperating with Japanese police but likewise declined to provide further information, citing an ongoing investigation.

“Our service members are expected to show respect to the community that we call home,” base spokesman Maj. Gerard Farao said in an email to Stars and Stripes on Tuesday. “We take all allegations seriously and hold all service members to a high standard of professionalism.”

Iwakuni city, representing Yamaguchi prefecture and four other municipalities near the air station, on Monday asked the air station and the defense bureau to take measures to prevent similar incidents. The air station, home to the Navy’s Carrier Air Wing 5, is about 25 miles south of Hiroshima.

“It is extremely regrettable that an incident like this has occurred since it gives great concern to the residents living near the base,” the city’s release said.