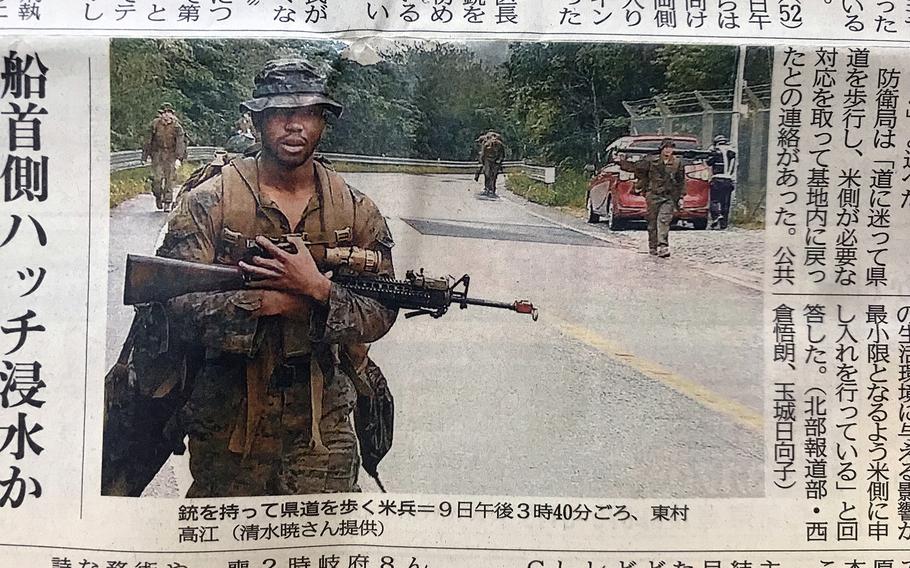 A photo of several U.S. Marines walking on a roadway in Higashi village appeared in the Okinawa Times newspaper, Saturday, Dec. 10, 2022. (Matthew M. Burke/Stars and Stripes)

CAMP FOSTER, Okinawa — A Japanese woman attempted to take a rifle from a member of a squad of U.S. Marines who strayed off a military training area and into a local village on Friday, according to a spokesman for the Okinawa Defense Bureau.

About 15 Marines wandered off the Jungle Warfare Training Center at Camp Gonsalves and into nearby Higashi village around 3:40 p.m., the Okinawa Times newspaper reported Saturday.

The Marines realized their error and marched quickly toward the Gonsalves gate, 3rd Marine Division spokesman Lt. Col. Kurt Stahl wrote in an email to Stars and Stripes on Monday. He said the Marines were not carrying live ammunition.

“We strive to be good neighbors and mitigate the impact of training on the local community wherever possible,” wrote Stahl, who did not identify the unit involved.

However, a group of local residents confronted the Marines on their way back to Gonsalves, the Defense Bureau spokesman said by phone Monday. The bureau represents the Ministry of Defense.

“They were chased by a group of locals, and one of them tried to take a gun from the Marines,” the spokesman said. “The U.S. took the necessary measures, and they went back to base.”

The Okinawa Times on Sunday identified Akino Miyagi, a butterfly scientist known locally for protesting the U.S. military presence, as the person who grabbed the Marine’s rifle.

“I got close to them and grabbed a gun, but we didn’t chase them,” the newspaper quoted her as saying.

The Marines were originally spotted walking southbound along both sides of Route 70 in the Takae area of Higashi village, the Okinawa Times reported Saturday. They carried rifles and a larger weapon thought to be a portable air-defense system, according to the report.

“It is not normal to carry guns out of base and it’s normal to think that they are loaded,” Miyagi told the newspaper. “It is very scary.”

Police are considering whether to recommend charges against Miyagi, who was not arrested, a Nago Police spokesman told Stars and Stripes by phone Monday.

The defense bureau spokesman said the bureau explained to the Marine Corps that they must consider public safety and have as small a footprint as possible.

Officials from the Marines were expected to meet with Kumiko Nakamine, director of Takae district, on Monday, a Higashi village spokesman told Stars and Stripes by phone that day.

Higashi Mayor Masanobu Toyama was awaiting an explanation from the U.S. military before deciding whether to lodge an official protest.

“I don’t want the U.S. military to make the citizens feel anxious,” Toyama said Monday through the spokesman. “It’s our job to create a safe living environment for the citizens.”