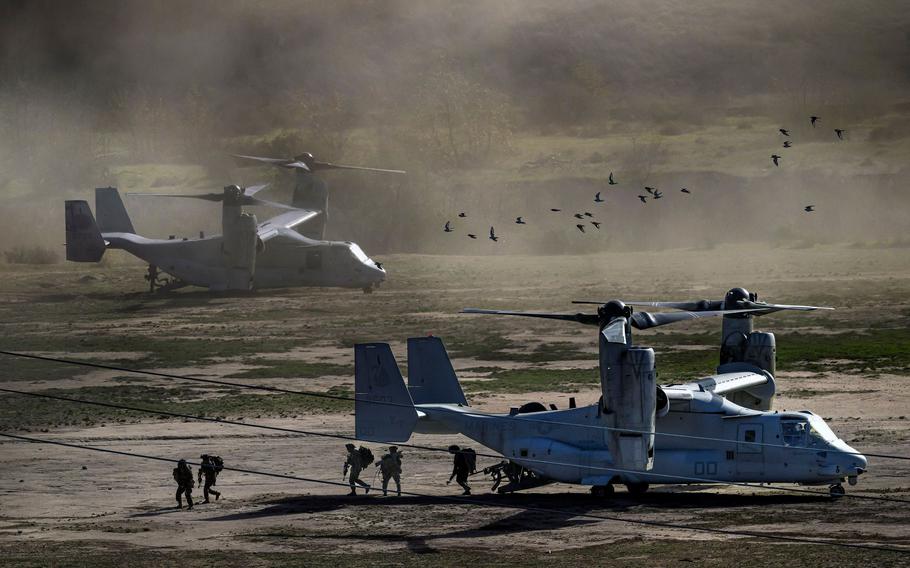 They circled the perimeter of a landing zone to ensure there were no adversaries; once the area was declared clear, the pilots radioed back to two Ospreys carrying a company of Marines that it was safe for them to come in and land.

Minutes later, the Ospreys from the 3rd Marine Aircraft Wing appeared over the hills flying in formation and, as they prepared to land, their propellers shift, kicking up huge dust clouds. Marines poured out, securing the airfield’s perimeter before pushing forward.

The scene that played out on Monday, Dec. 5, was the first of several simulated air assaults to take an airstrip on a contested island. The scenario is one of many that will be part of the 1st Marine Division’s annual three-week Steel Knight training exercise being held across 60,000 square miles in Southern California and Arizona. The training area replicates actual distances in the Western Pacific where the U.S. can access bases.

“We are training them for a specific purpose, to be ready to go forward,” Maj. Gen. Benjamin Watson, commanding general of the 1st Marine Division, said as he watched over the air assault, “to contribute to deterrence on behalf of our nation, but if deterrence fails, then fundamentally, we are the folks that need to be prepared to fight and win against a peer-level adversary.” 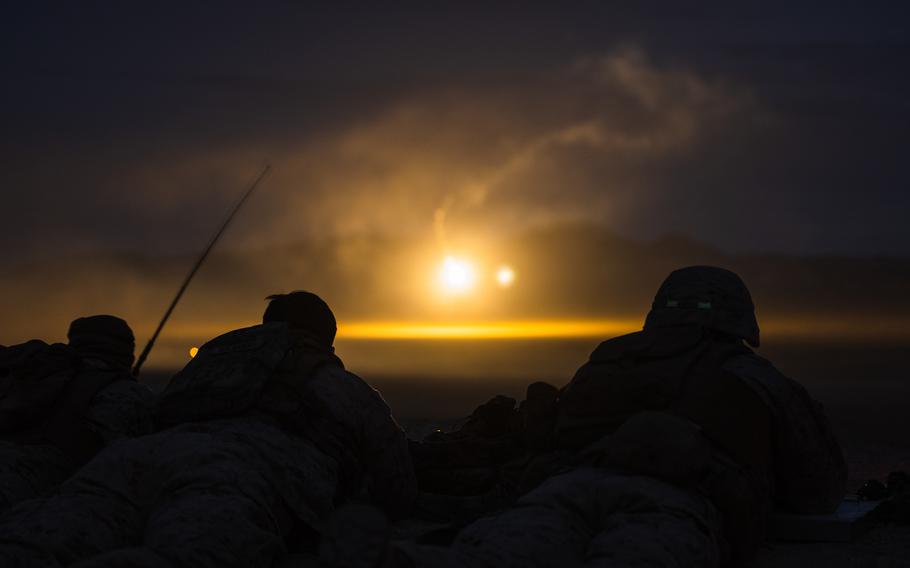 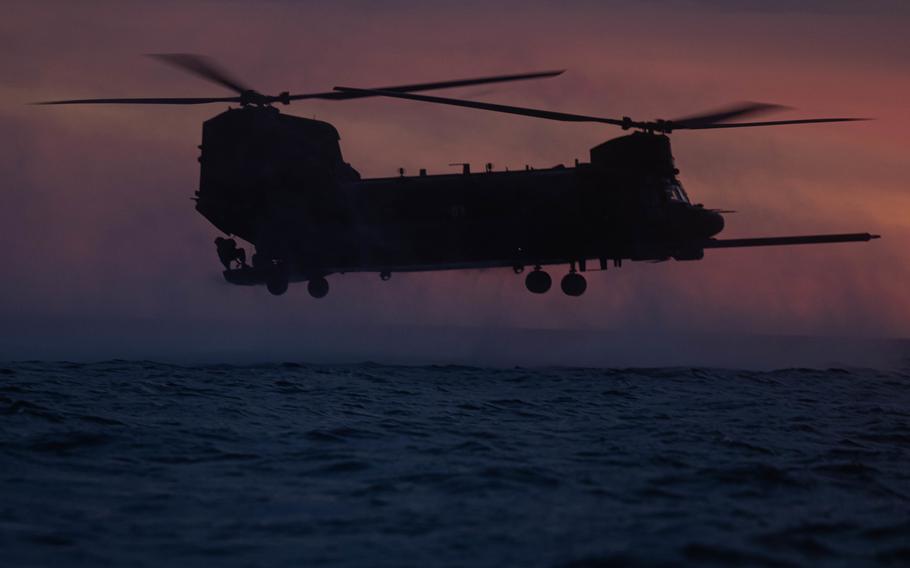 The exercise involves 10,000 troops who come from units in the 1st Division, 3rd Marine Aircraft Wing, 1st Marine Logistics Group, I Marine Expeditionary Force and the U.S. Navy’s Expeditionary Strike Group 3. The exercise is a sort of final exam for an upcoming deployment to Australia and tests Marines, corpsmen, sailors and pilots on their competencies in their fields, while certifying them for the upcoming deployment.

The exercise continues through Dec. 15.

Though Steel Knight debuted more than 30 years ago, it has evolved to address the Marines’ needs as the nature of conflicts evolve. After 20 years of fighting in the deserts of Iraq and Afghanistan, U.S. military leaders are now preparing for conflicts in the Indo-Pacific region. Instead of focusing on the Navy getting Marines onto land, Marines are focusing on protecting key maritime straits and water areas of the Pacific Ocean. An example in this exercise is creating a fictional island scenario between Camp Pendleton and San Clemente Island as a “key maritime strait.”

Steel Knight for the past few years has focused on the Marine Commandant’s 2030 Planning Guide, which envisions future conflicts that include utilizing long-range firepower; deploying smaller infantry units that can swiftly respond, packing their own arsenal of surveillance drones and anti-aircraft missiles; and full integration with the Navy.

Many Marines aren’t familiar with being on Navy ships and this exercise helps smooth the communication, operation and integration between the sister service branches, officials said.

“This exercise has grown exponentially from where it was focused on a tank battalion making a transit in the desert to now where we have brought in the Navy/Marine Corps team together,” said Navy Capt. Jennifer Ellinger. “This is the best exercise I’ve ever been involved in.” 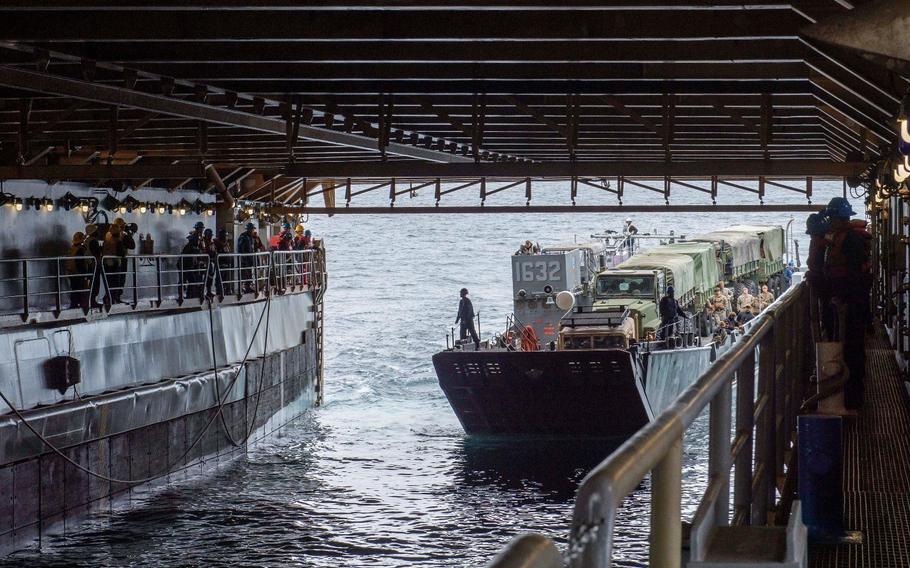 Watching the exercise also were two pilots, Capt. Kyle Davinsizer, who flies Ospreys, and Capt. Tommy Gavin, a Huey pilot. Both expected to fly later this week and were looking forward to their training.

“They push us out to San Clemente Island,” said Gavin, who has been in the Marines for seven years and logged 7,500 flight hours. “Great training out there with the (Navy’s live fire) ranges. The Navy also provides pulled targets for the Marine gunships to practice. That’s really good training integrated with the Navy there.”

“Anything like this is pretty exciting for us,” said Davinsizer, who has been a Marine for more than eight years and logged 1,000 flight hours.

And when they get a moment to glance down along the coast of Southern California, they said they always enjoy their view.