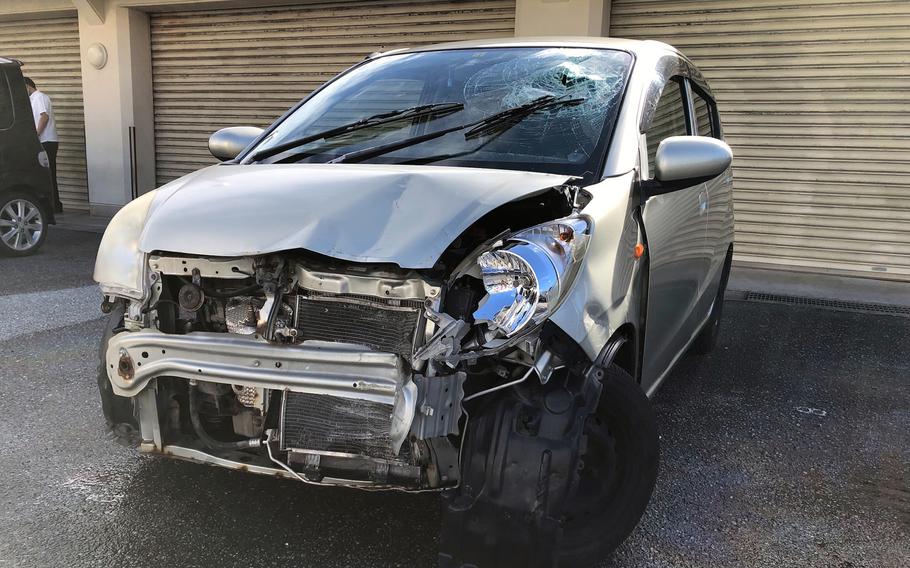 CAMP FOSTER, Okinawa — A Marine on Okinawa may face a drunken driving charge after Japanese police say he led them on a short chase before he crashed into a bar facade in Naha city.

Cpl. Christian Alvareztoc, 24, assigned to Camp Courtney, was treated at a local hospital for a facial gash following the 2:18 a.m. Sunday crash at Beer Bar Felt in the Makishi area, a Naha police spokesman told Stars and Stripes by phone Monday.

Alvareztoc was released to military police, the spokesman said. He said Alvareztoc will likely remain free as long as he submits to police questioning. Marine Cpl. Christian Alvareztoc, 24, of Camp Courtney, was treated at a local hospital for a facial gash following a weekend crash at Beer Bar Felt on Okinawa. (Keishi Koja/Stars and Stripes)

Alvareztoc, a native of New York, is a ground electronics telecommunications and information technology systems maintainer with the 3rd Marine Division, division spokesman Lt. Col. Kurt Stahl wrote in an email to Stars and Stripes on Monday.

“The Marine Corps is aware of the alleged incident and cooperating with local authorities,” Stahl wrote. “The alleged misconduct is not aligned with our core values, which the majority of Marines and Sailors uphold.”

Police attempted to pull over Alvareztoc’s Daihatsu Mira in the Kumoji area after it made a left-hand turn with no signal shortly before the crash, the police spokesman said.

Police chased the Daihatsu for approximately a half-mile at speeds of 15 to 40 mph, the spokesman said. He said the car went the wrong way on a one-way street and crashed into the bar.

Alvareztoc was unsteady on his feet when he exited the vehicle, smelled of alcohol and reportedly couldn’t speak properly, according to police.

Police prioritized Alvareztoc’s treatment over sobriety checks, the spokesman said. Hours after the crash, a Breathalyzer measure his blood-alcohol content at 0.11%, over three times Japan’s legal driving limit of 0.03%, according to police.

A 21-year-old unnamed Marine passenger was uninjured, the spokesman said. He could also face charges. It is against the law in Japan to knowingly ride in a vehicle with someone who is intoxicated.