Marines get last delivery of iconic H-1 helicopter. But don’t call it the ‘end of an era’ yet 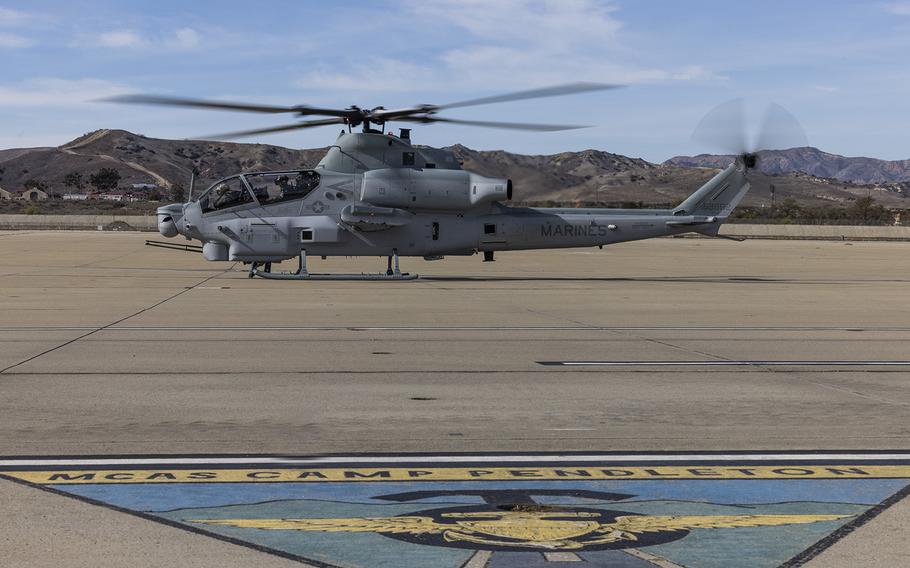 (Tribune News Service) — A Marine unit at Camp Pendleton took delivery this month of its last new H-1 helicopter, 60 years after the service ordered its first ones in 1962.

The last helicopter — an AH-1Z Viper — was flown from Amarillo, Texas, to the base by Col. Nathan Marvel, the commanding officer of Marine Aircraft Group 39 on Nov. 4.

Marvel, like most Marines, refers to the AH-1Z as the “Cobra,” the moniker of previous versions of the attack helicopter. Modern Cobras, like the first ones developed in the mid-1960s, are based upon and share several components with the Corps’ utility helicopter variant, the UH-1Y Venom — commonly called “Hueys.”

Early versions of the helicopters feature prominently in many TV and film depictions of the Vietnam War, such as “Apocalypse Now”, “Platoon” and “Full Metal Jacket.”

“There (was) nothing more iconic than the Huey in Vietnam,” Marvel told the Union-Tribune in an interview. “Same thing in Afghanistan and Iraq, and the same with the Cobras.”

Since 2010, there have been 349 modern variants of the Huey and Cobra added to the Corps’ helicopter fleet. While that run is now over for U.S. forces, H-1 manufacturer Bell will continue to produce the helicopters for U.S. allies, the company said.

Still, the Marines plan on flying the helicopters for the next 20 to 30 years, according to Marvel.

“By no means is this the end of an era — it is the next chapter in the great legacy of the H-1 and the U.S. Marine Corps,” Marvel said in a statement.

The helicopters changed the way the Marines fight, according to Mike Deslatte, the H-1 program director at Bell in Amarillo.

“The first production lot of U.S. Marine Corps H-1s was ordered in 1962, and they changed the way Marines fight today,” Deslatte said in a statement. “Completing the AH-1Z and UH-1Y deliveries to the U.S. Marine Corps adds one more chapter to the legacy of the H-1 platform.”

Both variations, the Huey and Cobra, have been upgraded over the years as military technology evolved. Modern upgrades in the AH-1Z include a four-blade rotor and modern electronics and communications. It’s armed with a Gatling gun and rockets, as well as air-to-air and air-to-ground missiles, the Marines said.

In battle, the helicopters offer close air support for infantry units on the ground as part of a Marine Air-Ground Task Force. They can operate from ships at sea or land bases. It’s not uncommon for Cobra pilots to bed down and spend time with the ground troops they support, Marvel said.

“I can land right next to a Marine, or Marines who need food, supplies or extradition,” he said. “We come when they call and will be there, on station, as long as we’re needed.”

While Lockheed Martin and Bell are competing to provide the U.S. Army with a next-generation attack helicopter, the Marine Corps is not yet shopping for its own, according to Forbes.

In the meantime, the Cobra cockpit will continue to be filled by future Marines, Marvel said.

“I would not be surprised if my son, who is 6 years old, flies it,” he told the Union-Tribune.