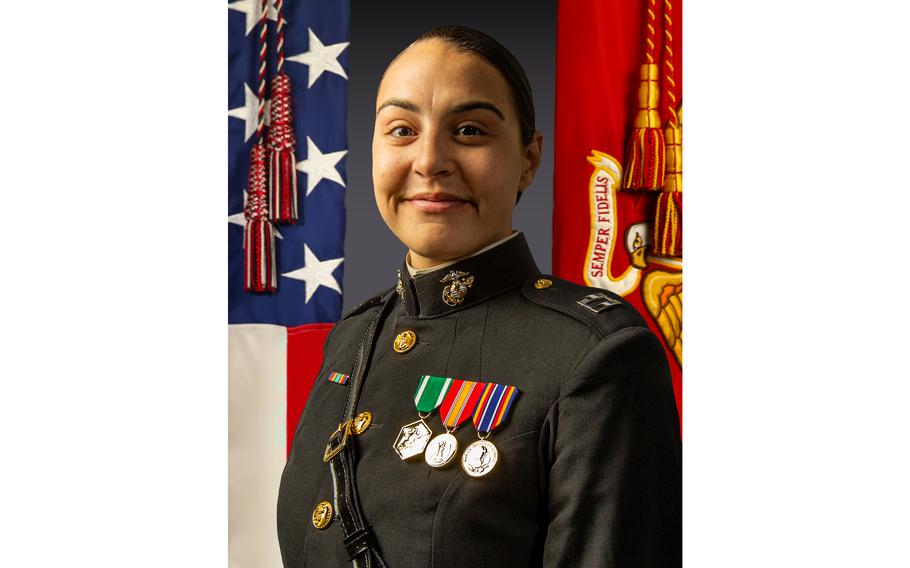 When Capt. Kelsey Hastings takes command of the Marine Corps’ revered Silent Drill Platoon later this month, she will become the unit’s first female leader — and its first-ever female member.

Hastings, a 2017 Naval Academy graduate, was named the Silent Drill Platoon’s commander for the 2023 parade season, the Marine Corps announced Tuesday. She will take command of the ceremonial unit on Nov. 21.

“It is exciting to be selected as the Marine Corps Silent Drill Platoon commander," Hastings said. "SDP is oftentimes the face of the Marine Corps, showing the world how elite and professional our organization is, and being selected to lead them is truly an honor. I look forward to working with my new Marines and being a face that a little girl can see and envision herself as."

The 24-member Silent Drill Platoon dates back to the 1940s and features hand-selected infantry Marines who perform complicated drill routines featuring elaborate spins and tosses of their signature M1 Garand rifles with fixed bayonets without the benefit of any spoken commands or cadence. The platoon, headquartered at the Marine Barracks in Washington, D.C., performs hundreds of times each year at events across the United States, including in weekly parades during the summer months outside the barracks and at the Marine Corps War Memorial in Arlington, Va. 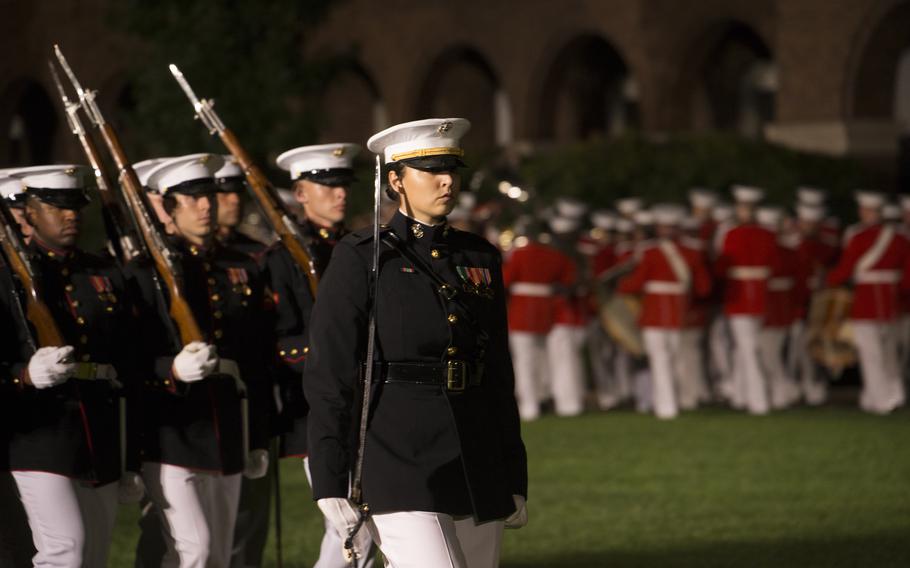 Capt. Kelsey Hastings will take command of the Marine Corps’ Silent Drill Platoon on Nov. 21, 2022, becoming the first female member of the unit and its first female commander. Hastings is pictured here as a first lieutenant in October 2021, leading the Marines’ other ceremonial marching platoons during a retirement parade for Gen. Gary Thomas at the Marine Barracks Washington. (U.S. Marine Corps)

Col. Robb Sucher, the commander of the Marine Barracks, described Hastings as a “stand-out performer” and tireless worker in the announcement of her selection.

“I'm excited for her to represent Marine Barracks Washington as a representative of the Marine Corps in this role,” he said.

Hastings is a native of Seattle, Wash., where she graduated from the Chief Sealth International High School before attending the Naval Academy. She was a member of Navy’s rowing team, helping the team win three consecutive Patriot League women’s rowing championships between 2015 and 2017, according to the academy.

She first served in Hawaii, where she was an artillery platoon commander, a fire direction officer and a battery executive officer before attending Ceremonial Drill School, which qualified her to serve in Marine ceremonial units, according to the service.

Just seven years ago, Hastings would not have been eligible to serve in the Silent Drill Platoon or in the artillery field, which for decades were male-only combat positions.

The Marine Corps opened front-line combat roles, including infantry and artillery jobs, to women in 2016 after then-Defense Secretary Ash Carter ordered all military specialties and units open to female troops in December 2015.

The Marine Corps initially opposed opening many jobs, especially infantry roles, to women. But within five years, nearly 300 female Marines had moved into previously closed combat roles, according to the service.

Those numbers have continued to grow. As of Nov. 1, some 559 female Marines had earned jobs in combat specialties previously closed to them, including 388 enlisted Marines and 171 officers, the service said Tuesday. In all, 1,346 female Marines are now assigned to units that were all-male in 2015, according to the Corps.