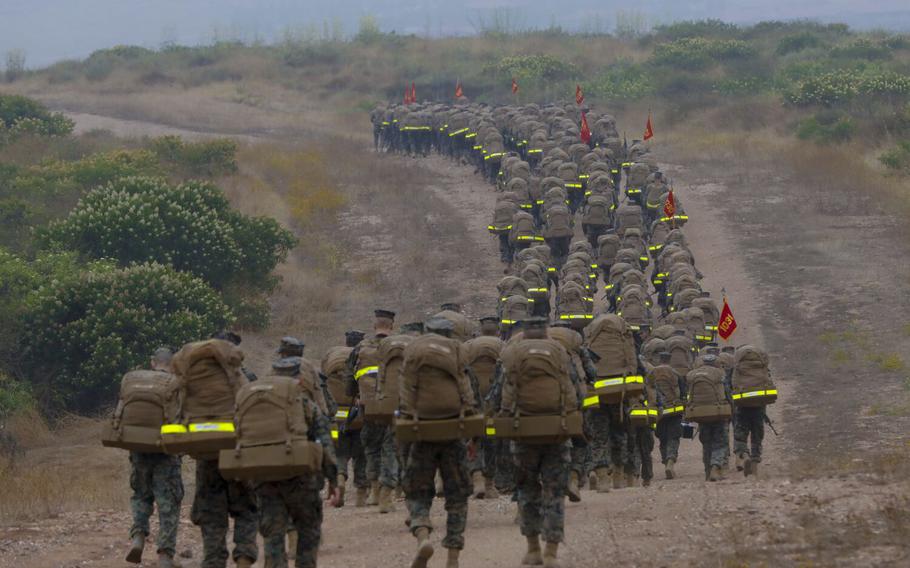 Marines from Bravo Company, MCRD on on their last phase of the crucible, make their way down from the reaper during the 3-day crucible event at Camp Pendleton. (Nelvin C. Cepeda, The San Diego Union-Tribune/TNS)

(Tribune News Service) — An 18-year-old Marine recruit died in September after collapsing during training at Camp Pendleton, the Marines said in a statement late Saturday.

“We are greatly saddened by the untimely passing of Pfc. Javier Pong as he pursued his journey to become a United States Marine,” Morris said in a statement. “We are committed to honoring his memory, supporting those with whom he served, and investigating the cause of his death to ensure we can safely transform civilians into Marines and retain the trust of the American people.”

Pong was from Las Cruses, N.M., and recently graduated high school in May, according to his obituary.

Pong’s death was announced by the Marines in an e-mailed statement Saturday evening — a full 11 days after the recruit died. The Marines did not immediately respond to the Union-Tribune’s questions about what type of training recruits where engaged in when Pong collapsed or details about where in the training cycle Pong’s company was at the time.

Recruits who train at MCRD San Diego spend about five weeks at the depot before moving to Camp Pendleton for another five weeks of field training, according to the Marines’ recruit training matrix.

The Marines did not say to which recruit training company Pong was attached.

In-service military training deaths are routinely announced within about 24 hours and the name or names of service members killed are then normally released after another 24 hours — pending next-of-kin notification.

When Seaman Kyle Mullen, 24, died Feb. 4 during SEAL training in Coronado, the Navy announced the death in a news release the next day. They named Mullen in a separate release the following day, Feb. 6.