Marines at Biden speech prompt debate about politicizing the military 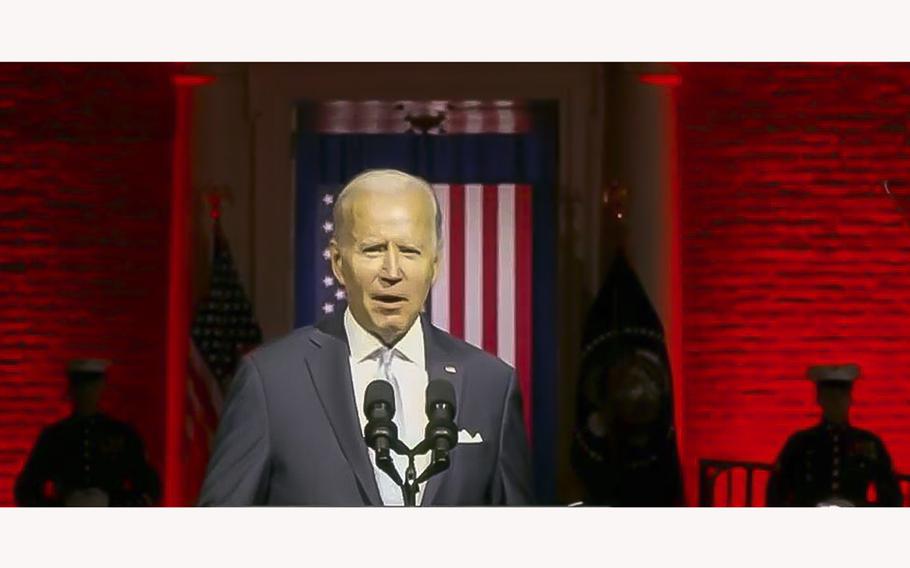 A video screen grab shows President Joe Biden during a speech he gave in Philadelphia on Thursday, Sept. 1, 2022. Two U.S. Marines standing at attention during the speech are in the background. (C-Span)

The White House's decision to flank President Joe Biden with U.S. Marines as he delivered a speech raising alarm about the authoritarian impulses of former president Donald Trump and his supporters has sparked debate about what is an appropriate use of the military.

Biden, speaking at Independence Hall in Philadelphia on Thursday night, said that democracy and equality are under assault, and that he wanted to "speak as plainly as I can to the nation" about threats to them. Trump and his allies represent a form of extremism that "threatens the very foundations of our republic," Biden said, adding that while "mainstream" Republicans respect the rule of law, the former president does not.

Biden delivered his speech in front of the building where the U.S. Constitution was written, as two Marines in dress blues stood in the background. Red light bathed the building and the Marines.

Presidents have long used U.S. troops and military hardware as they address the American people. But military officials often have sought to narrow how people in uniform are pulled into the political spotlight, adhering to the belief that the military is an institution that protects all Americans regardless of political affiliation.

A White House official, speaking on the condition of anonymity because of the sensitivity of the issue, acknowledged that the administration made a conscious decision to include the Marines for symbolism.

"The President gave an important speech last night about our democracy and our values, values that our men and women in uniform fight every day to protect," the official said in a statement. "The presence of Marines at the speech was intended to demonstrate the deep and abiding respect the President has for their service to these ideals and the unique role our independent military plays in defending our democracy, no matter which party is in power."

For some scholars who study civil-military affairs, the use of the Marines as backdrop to the speech was unwise.

Peter Feaver, a professor at Duke University, said that while presidents are political actors, they "need to be careful about not bringing the military into the frame when they are engaging in partisan, political acts."

"In this case, the choice to literally keep the Marines guards in the frame was an unfortunate one," said Feaver, who raised concerns about how Trump politicized the military on numerous occasions. "It may even have the effect of distracting from the message as people debate the optics rather than the substance of the president's speech."

Lindsay Cohn, who studies civil-military affairs at the Naval War College, said that Biden being framed by Marines during the speech was "not a crisis, but it could and should have been avoided."

Cohn said she can see an argument that Biden was making a necessary and nonpartisan speech in which he noted explicitly that not all Republicans are a threat. But she added that the Biden administration needs to be "oversensitive and cautious about optics to try to strengthen some of the norms" that the Trump administration weakened.

Addressing U.S. troops at the Pentagon in February 2020 at the beginning of his administration, Biden said that he would never disrespect them and "never politicize the work you do."

Biden's critics - including many who remained silent during Trump's battles with the Pentagon - pounced on the use of the Marines.

"The only thing worse than Biden's speech trashing his fellow citizens is wrapping himself in our flag and Marines to do it," Rep. Darrell Issa, R.-Calif., tweeted.

James Hutton, a Veterans Affairs official during the Trump administration, tweeted that Biden "used Marines as props for his divisive and clearly political speech."

Biden's supporters responded by pointing out the many ways that Trump undermined the nonpartisan nature of the military.

In June 2020, he sought for days to use active-duty U.S. troops to quell protests prompted by the police killing of George Floyd, alarming senior Pentagon officials who saw his plans as an abuse of power. At the height of the crisis, federal forces cleared protesters from Lafayette Square outside of the White House before Trump led other senior U.S. officials to a nearby church for a photo opportunity. Gen. Mark A. Milley, chairman of the Joint Chiefs, later apologized for appearing with the president briefly outside the White House, saying that his presence in that moment "created the perception of the military involved in domestic politics."

At the outset of his administration, Trump traveled to the Pentagon and signed executive actions that included an order meant to severely curb immigration from several Muslim-majority countries. He did so in the Pentagon's "Hall of Heroes," a room dedicated to the military's Medal of Honor recipients.