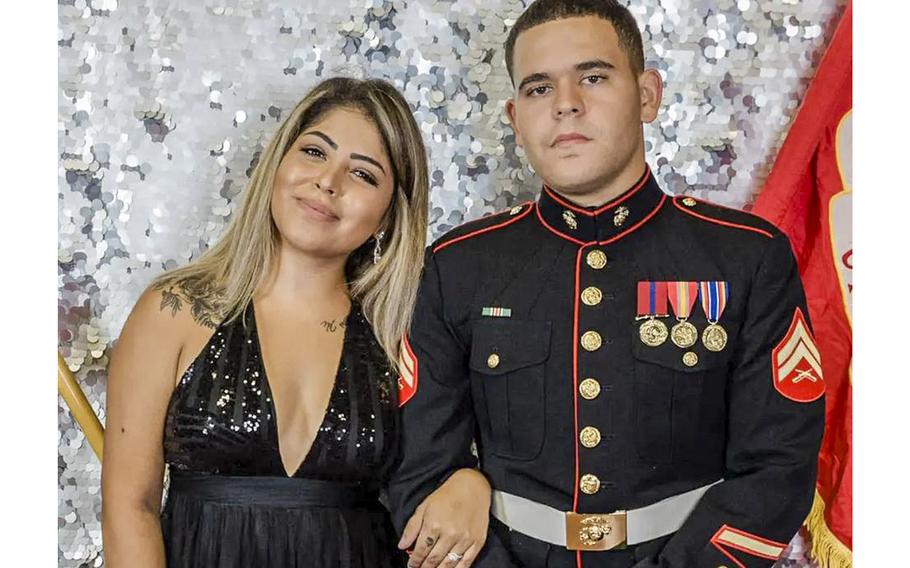 (Tribune News Service) — A Marine allegedly stabbed his pregnant ex-wife to death following an argument on a bustling Hawaii highway — even as passersby and commuters hopped out of their own vehicles and desperately tried to stop him.

Dana Alotaibi had opened up about the alleged abuse she'd faced in her marriage on social media before she was murdered on the H-3 Freeway on Wednesday night. Witnesses driving by at the time, several of who stopped in a bid to intervene, told authorities they "observed a male standing over a female, stabbing her multiple times," Deena Thoemmes, homicide lieutenant of the Honolulu Police Department's criminal investigation division said in a press conference on Thursday.

The suspect, identified as Bryant Tejeda-Castillo, then turned the knife on himself before fleeing into a nearby wooded area, according to police.

One witness, who wanted to remain anonymous, told KITV4 he "froze out of fear and shock," but watched while others attempted to perform CPR in a bid to revive 27-year-old Alotaibi.

"It was just her face, she just looked past the point of no return, you know," he told the outlet. "Could you imagine being stabbed in the neck and then watching as your life just literally leaks out of you, and everyone around you either doesn't know what to do, or is too shocked to do anything about it? I couldn't imagine that."

Responding officers with the Honolulu Police Department located Tejeda-Castillo hiding in some brush nearby. As they approached, he again started using the same knife to stab himself before he was taken into custody.

Tejeda-Castillo is facing a charge of second-degree murder and is being treated at a Hawaii hospital for self-inflicted injuries.

Alotaibi was also rushed to the a hospital in critical condition, but she was pronounced dead a short time later. Her friends said she was expecting a baby with her new boyfriend and had plans to move back to Virginia. She was about 13 weeks pregnant at the time of her death.

"It has been determined that the victim and the male were married, and had recently been going through marital problems," Thoemmes told reporters. "At the time of the incident, they were arguing before he stabbed her multiple times that caused her fatal injuries."

In November, Tejeda-Castillo filed for divorce, and it was ultimately granted by a court last month, friends said. They'd been married for three years.

In a series of videos shared on YouTube in recent months, Alotaibi detailed for viewers the abuse she'd faced in her marriage, claiming her husband hit her, pulled her hair, choked her, cheated on her and even threatened to kill her. In one clip, she can be seen sobbing in a call to the National Suicide Prevention Hotline, according to Hawaii News Now. She complains to the operator about how the military has provided her little assistance despite her repeated reports of domestic violence and infidelity.

"It's haunting me, like, all the incidents that he's hit me and done horrible things to me," she says. "Even when I reached out for help, like nothing was done at all. And I'm thinking like, what can I do, why is he so untouchable?"

Alotaibi's mother, Natalia Cespedes, said her daughter also sent her photos of the injuries she suffered due to the alleged abuse. She added that Alotaibi did manage to obtain a no contact order for her ex-husband, but that the military should have done more to protect her.

Tejeda-Castillo, assigned to the Marines' 3rd Littoral Combat Team, was being held on $1 million bail.