Marines, Australians hone logistics skills they’ll need to deploy from Down Under 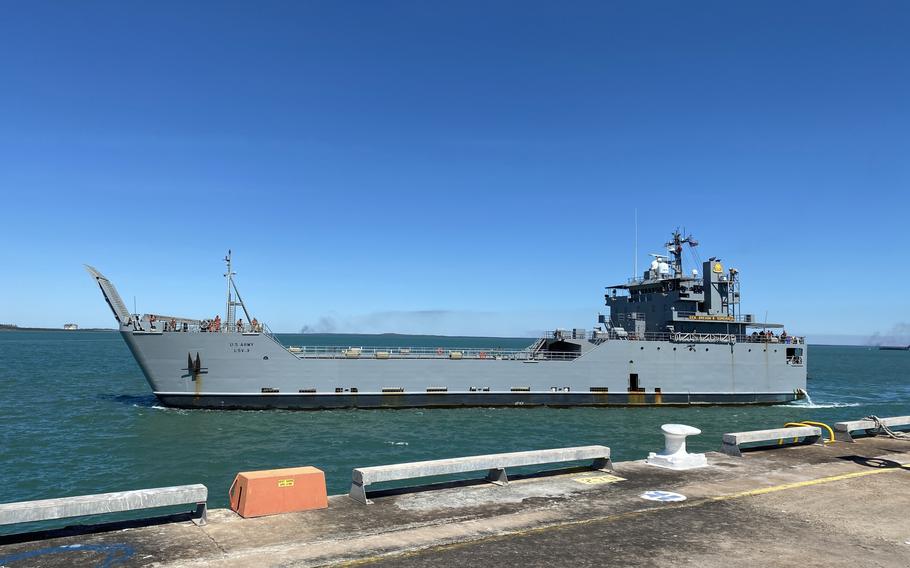 A three-week exercise in northern Australia is testing U.S. and Australian forces’ ability to move troops and equipment across hundreds of miles in the event of a regional crisis or humanitarian disaster.

“We are deploying significant forces by land, air and sea to training areas in both [Western Australia] and the [Northern Territory] including Mount Bundey Training Area, RAAF Base Curtin and Yampi Sound Training Area,” Col. Christopher Steele, who leads the Marines in Darwin, said in the statement.

The entire 2,200-strong Marine rotational force is taking part; it began a six-month rotation to the Northern Territory in March, according to Capt. Joseph DiPietro, a spokesman for the force.

The drills call for moving troops and vehicles 650 miles from Darwin to Broome, 1,000 miles north of Perth in Western Australia, he said in a telephone interview Tuesday

“The distances that we are exercising in Koolendong replicate the long distances and austere environments we might operate in throughout the Indo-Pacific,” he said.

Koolendong is likely a test of the logistics behind deploying units such as the newly formed Marine Corps littoral regiment to defend archipelagos in the Indo-Pacific region, Ross Babbage, a former Australian assistant defense secretary, said in an email Tuesday.

“This would probably involve company-sized units (100-120 troops) inserted with real or simulated anti-shipping and shorter-range anti-aircraft missile systems together with all of the situational awareness systems … that would be required to make the concept work,” he said.

The vast Australian exercise areas are particularly useful for this type of test, he said.

The exercise prepares troops to respond to a security crisis or major natural disaster in Southeast Asia, including the South China Sea, in which Australian and American forces deploy from Darwin, according to Carlyle Thayer, an emeritus professor at the University of New South Wales and lecturer at the Australian Defence Force Academy.

“The most logical forward base for these forces would be in the Philippine archipelago,” he said in an email Tuesday.

The U.S. Army’s Logistics Support Vessel-3, the Gen. Brehon B. Somervell, will move vehicles and troops from Darwin to Broome, DiPietro said.

The rotational force’s MV-22 Osprey tiltrotor aircraft are also moving personnel beyond the range of the Marines’ helicopters, he said.

“This is important tasking and there is a lot to test and sort out to ensure that it can be made to work,” Babbage said.