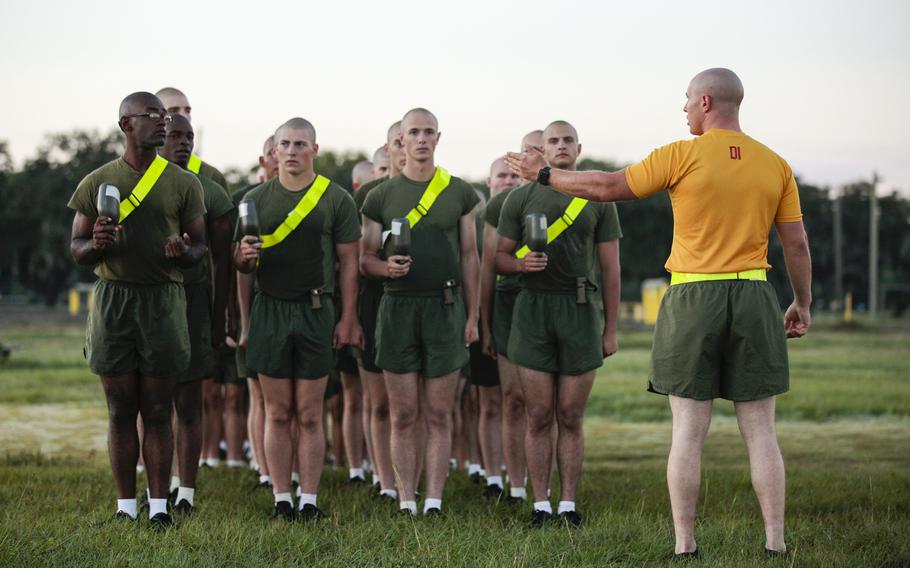 HILTON HEAD ISLAND, S.C. (Tribune News Service) — On a day where a scorching sun and swelling humidity needled the heat index to over 100 degrees, causing authorities to warn area residents to stay inside, some recruits at Marine Corps Recruit Depot Parris Island succumbed to the heat.

By Monday's end "several recruits were transported to Beaufort Memorial Hospital for heat-related symptoms," Maj. Philip Kulczewski, the director of the depot's Communication Strategy and Operations Office, said in a Tuesday email.

One recruit was confirmed to have a heat injury.

Heat-related symptoms or injuries are defined, according to Kulczewski, as having a temperature above 101.5 degrees, as well as other signs or symptoms, ranging from headaches to dizziness, cramps to blurry vision, and even loss of consciousness. A "competent medical authority" sees all recruits with heat injuries and verifies their conditions.

"During the summer months when temperatures increase, we routinely treat recruits who experience heat-related symptoms," Kulczewski wrote in an email on Tuesday.

In Beaufort County, the maximum heat index climbed to 106 degrees on Monday, according to the National Weather Service. A heat advisory from 11 a.m. to 7 p.m. urged residents to spend time in the air conditioning, drink plenty of water, take frequent shade breaks if outside and understand that heat exhaustion/illness is possible. Around noon, the temperature had reached 93 degrees and humidity shot up to 80%.

On Tuesday, temperatures reached 94 degrees, with humidity around 60%. The heat index was projected to be about 106 degrees. No information was available on whether recruits Tuesday suffered from heat-related causes.

The heat alone isn't a reason for Marine recruits to throw in the proverbial training towel. After all, wars are fought where temperature and conditions aren't negotiable. The historic military staple trains nearly 20,000 recruits a year.

"Marines and recruits train in the heat, the cold and the rain," Kulczewski said. "Parris Island has aggressive, detailed and deliberate safety measures in place to facilitate safe and realistic training."

That includes monitoring the weather, temperature, humidity and heat index, all of which dictate the gear used and whether recruits will train. A black flag condition is triggered when the temperature reaches 90 degrees, meaning that "all strenuous outdoor activity that is not considered essential should be halted," according to the official website of the U.S. Marine Corps.

Information on what training exercises recruits were participating in on Monday was not available.

On June 4, 2021, when temperatures around Parris Island were in the mid- to upper-80s and relative humidity was between 60% and 70%, frantic 911 calls for recruits suffering "heat injuries" reached operators, according to previous reporting by The Island Packet and Beaufort Gazette.

A handful of recruits, who were undertaking the Crucible — a 54-hour-long exercise that serves as the final leg of training before they become Marines and graduate — were suffering from heat injuries. At least two recruits recovered, but Pfc. Dalton Beals, 19-year-old from of Pennsville, New Jersey, could not be revived.

Multiple investigations have been launched in Beals' death and the safety of the Crucible.

The Crucible, a decades-old and storied staple, tests recruits on their eleventh of 13 training weeks in conditions that simulate war. Recruits march 48 miles, hauling 45 pounds of gear through 36 stations and problem-solving exercises while operating on little food and sleep.

The Marine Corps' website notes the exercise "validates the physical, mental and moral training" recruits have endured during basic training.

Beals' tragic death rocked his quaint New Jersey hometown. It was a place the football player's friends called him a "gentle giant" and his family remembered him as a hero.

A request for legal services has been submitted by the Recruit Training Regiment in the case of Beals, Kulczewski said in his Tuesday email.

"It would be inappropriate at this time to speculate about the details of the case with pending litigation," he wrote.

Beals is at least the eighth Marine recruit death reported at Parris Island since 2000.