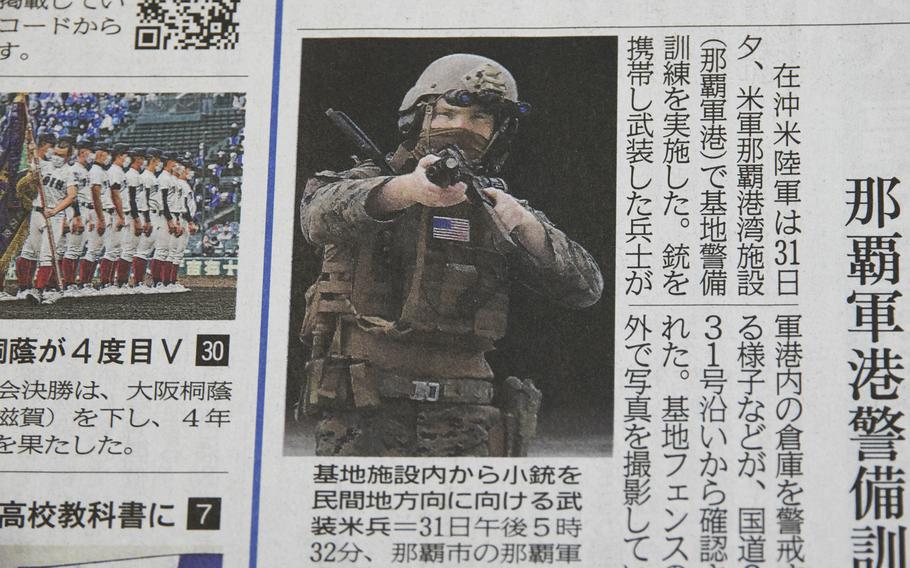 A U.S. Marine holding a rifle appears in the Ryukyu Shimpo newspaper on Friday, April 1, 2022. (Matthew M. Burke/Stars and Stripes)

CAMP FOSTER, Okinawa – The U.S. Army on Okinawa on Tuesday denied a local newspaper’s claim that a Marine pointed his rifle at a Japanese reporter during a security exercise at a U.S. military port last week.

Reporter John Matsumoto photographed the masked Marine – his rifle at chest height and its muzzle facing the camera – on Thursday evening at the Naha Port Facility. The Ryukyu Shimpo newspaper published the photograph the following morning.

“I have taken photos of many exercises, but that was the first time that someone pointed a gun at me,” Matsumoto said in the report.

Okinawa Gov. Denny Tamaki called the incident “outrageous” as he passed reporters at the prefectural offices Monday and proof that the U.S. military regards Okinawans as “an enemy,” according to the Okinawa Times on Tuesday.

But the Marine in Matsumoto’s photograph could not have seen the photographer or pointed his weapon at him, an Army spokesman told Stars and Stripes on Tuesday. The photograph was taken with a telephoto lens at a distance of 820 feet, 10th Support Group spokesman Army Maj. Richard Barker said in an email.

“The image captured of a Marine maintaining a security posture has been mischaracterized as threatening a reporter positioned outside the base's fence line at a significant distance. We reject this mischaracterization,” Barker wrote. “The Marine was scanning his position, per basic defensive procedures, and possessed no live ammunition or hostile intent.”

The weapon’s position, with its side and the edge of the barrel’s interior visible, proves it was not pointed directly at the reporter, Barker said.

Matsumoto took down his Twitter account after Japanese commenters criticized him for sensationalism, Barker said. Matsumoto was unavailable for comment on Tuesday, according to his editors at the Ryukyu Shimpo.

Tsuyoshi Arakaki, the paper’s associate managing editor and news director, told Stars and Stripes by phone that Matsumoto was a considerable distance from the Marine when the photo was taken, but he still felt threatened.

“It is possible that the soldier did not intend to threaten the reporter, but I think it is regrettable that there was a behavior that made our reporter feel threatened,” Arakaki said.

The Military Base Affairs Division of Okinawa prefecture has not decided whether to respond to the incident, a spokesman told Stars and Stripes by phone Tuesday.

The Army gave prefectural officials advance notice of the exercise from 4 to 6 p.m. at the port, Barker said, information that was posted on the prefecture’s Military Base Affairs Division Twitter.

During the exercise, soldiers and Marines with unloaded weapons practiced their responses to “foreign aggressors,” he said. The Army’s 835th Transportation Battalion conducted the exercise.

Matsumoto photographed the scene from a stepladder along the base fence line, Arakaki said. At approximately 5:30 p.m., the Marine turned in Matsumoto’s direction, paused for “several seconds,” and made eye contact, Arakaki and the article said.

A video on the incident posted on the Ryukyu Shimpo’s YouTube channel had more than 58,000 views by Tuesday afternoon.