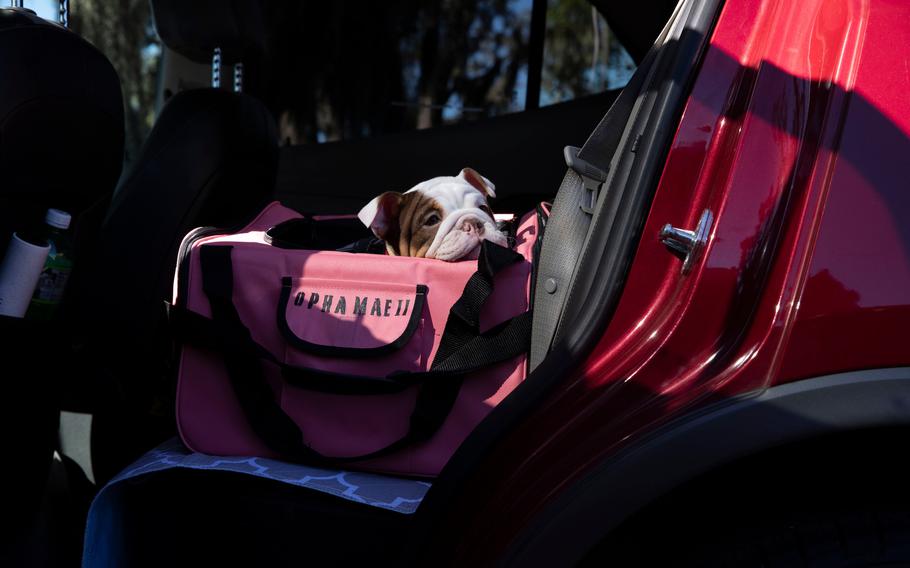 Parris Island Marine Corps Recruit Depot is preparing to welcome its newest mascot recruit, a tradition that dates back to 1914. (Michelle Brudnicki/Marine Corps)

(Tribune News Service) — Parris Island Marine Corps Recruit Depot is preparing to welcome its newest (and most adorable) mascot recruit, a tradition that dates back to 1914.

“Military working dogs have a huge history in our organization,” said Parris Island Chief Sworn Officer Bobby Yarbrough. “Everything from working on the battlefield ... to morale and welfare. It’s a symbol of not only today’s Marines but generations past.”

The pup, a bulldog dubbed Opha Mae II, is named after the first female Marine recruit, Opha Mae Johnson, who enlisted in 1918. Johnson worked in the office of the Quartermaster, according to the Marine Corps History and Museums Division Headquarters. When World War I ended, she had earned the rank of sergeant.

Opha Mae II is the second bulldog mascot named after Johnson, according to Island Packet and Beaufort Gazette reports.

Opha May I began her stint as a mascot for the recruit depot in 2017. She was the first female to occupy the post after taking over for Cpl. Legend, the depot’s longest-serving mascot, Parris Island officials previously told the Island Packet and Beaufort Gazette. Opha May I will be retiring in Chicago with her handler after five years of service, Yarbrough said.

Bulldogs, Yarbrough said, have acted as a symbol for Marines, who were called “devil dogs” during the Battle of Belleau Wood in France during World War I.

“The bulldog, I believe, was the most depictive of that image,” Yarbrough said. “It’s more of a lore than an actual history.”

Today, it’s an annual tradition for Marines to visit the Aisne-Marne American Cemetery, the final resting place of Marines killed in battle and “travel down the hillside” to drink water from the devil dog fountain, he said.

Opha Mae II will begin her post as a mascot when she graduates on May 6 alongside her handler, Pfc. Shannon Morales Canales. She will live in the barracks with her handler, start her Marine “training” with Oscar Company and be fitted for a uniform, Yarbrough said. Her duties include boosting morale, and attending graduations and community events.

“She likes to go through some of the obstacles and things that fellow recruits go through,” Yarbrough said. “Just like our mantra, ‘you have to earn the title United States Marine,’ and it’s no different for Opha Mae.”