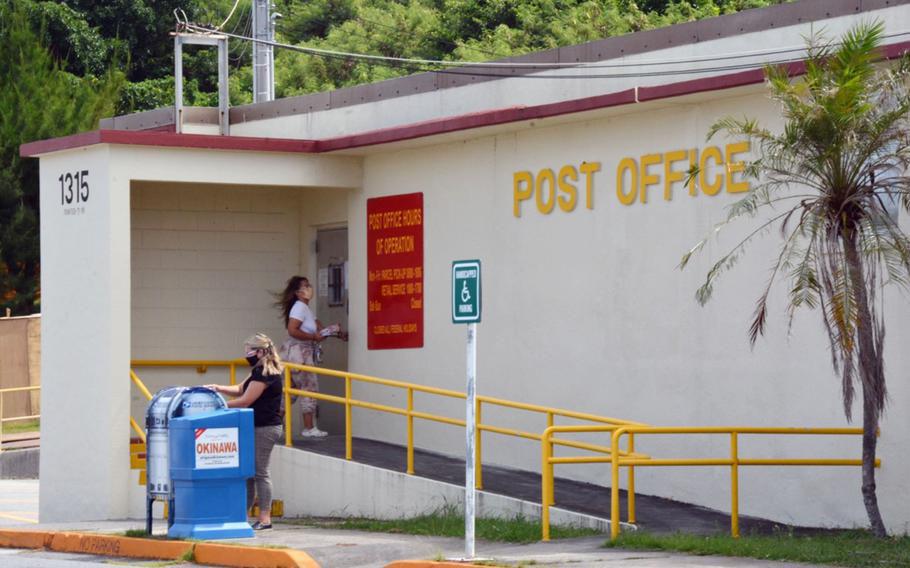 The post office at Camp Kinser, Okinawa, is seen on Oct. 6, 2021. (Frank Andrews/Stars and Stripes)

NAHA, Okinawa – A Japanese court sentenced two U.S. Marines to three-year suspended sentences Tuesday after they pleaded guilty to importing cannabis by mail and selling it to fellow service members.

It is unclear where the men are stationed on Okinawa. The Marine Corps did not respond to email inquiries about the case in December and again in February, and it was not mentioned at trial.

Judge Naoyuki Kimijima sentenced the pair to three years with hard labor and a $4,300 fine but suspended the sentence for four years because the crime was not “highly organized,” he said in court.

“They both admitted to what they have done and showed remorse,” Kimijima said.

Customs officials intercepted a package at the Camp Kinser post office April 21 with just over a quarter-pound of marijuana and about 4 ½ grams of cannabis liquid inside, Japanese prosecutors said. The parcel was sent from California by unidentified individuals and had arrived at Haneda International Airport the day before.

Fox and Johnson were charged Nov. 9 with violating one count of the control act, prosecutors said. Prosecutors sought three years imprisonment and about $4,000 in fines for each man.

The pair will likely not serve jail time unless convicted again in Japan.

Fox in court admitted contacting drug dealers in the United States, importing marijuana and selling it to service members before they were caught. He said he was facing financial hardship due to a divorce and the subsequent cut in pay. Johnson said he was trying to support his mother back in the U.S. who had lost her job due to the COVID-19 pandemic.

Johnson admitted to pitching in money for the marijuana and selling it to service members.

“I am deeply sorry for what I’ve done,” Johnson said in court in February. “Being desperate at that time, I thought that was the only option I had.”

Two other Marines were sentenced in the same court in February for similar but unrelated offenses.

Cpl. Nicholas Garner received two years in prison with hard labor and a $4,344 fine in Naha District Court on Feb. 18.